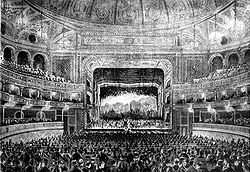 Many larger cities have both public and private concert halls. Particularly in smaller cities with fewer alternative venues, concert halls may also be used to accommodate other activities, from rock concerts to university graduation ceremonies, in addition to their primary purpose.

This list does not include other venues such as sports stadia or convention centres which may occasionally be used for concerts.

The list is organised alphabetically by geo-political region or continent and then by country within each region.