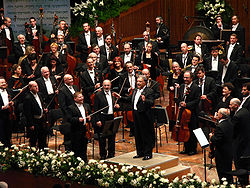 The Israel Philharmonic Orchestra (abbreviation IPO; Hebrew
Hebrew language
Hebrew is a Semitic language of the Afroasiatic language family. Culturally, is it considered by Jews and other religious groups as the language of the Jewish people, though other Jewish languages had originated among diaspora Jews, and the Hebrew language is also used by non-Jewish groups, such...
: התזמורת הפילהרמונית הישראלית, ha-Tizmoret ha-Filharmonit ha-Yisre'elit) is the leading symphony orchestra in Israel
Israel
The State of Israel is a parliamentary republic located in the Middle East, along the eastern shore of the Mediterranean Sea...
. It was originally known as the Palestine Orchestra, and in Hebrew as התזמורת הסימפונית הארץ ישראלית (ha-Tizmoret ha-Simfonit ha-Eretz-Yisre'elit, i.e. Symphony Orchestra of Eretz Israel).

The IPO was founded by violinist Bronisław Huberman in 1936, at a time when many Jewish musicians were being fired from European orchestras. Its inaugural concert took place in Tel Aviv
Tel Aviv
Tel Aviv , officially Tel Aviv-Yafo , is the second most populous city in Israel, with a population of 404,400 on a land area of . The city is located on the Israeli Mediterranean coastline in west-central Israel. It is the largest and most populous city in the metropolitan area of Gush Dan, with...
on December 26, 1936, and was conducted by Arturo Toscanini
Arturo Toscanini
Arturo Toscanini was an Italian conductor. One of the most acclaimed musicians of the late 19th and 20th century, he was renowned for his intensity, his perfectionism, his ear for orchestral detail and sonority, and his photographic memory...
.

In 1958, the IPO was awarded the Israel Prize
Israel Prize
The Israel Prize is an award handed out by the State of Israel and is largely regarded as the state's highest honor. It is presented annually, on Israeli Independence Day, in a state ceremony in Jerusalem, in the presence of the President, the Prime Minister, the Knesset chairperson, and the...
, in music, being the first year in which the Prize was awarded to an organization.

The IPO enjoys frequent international tours, and has performed under some of the world's greatest conductors
Conducting
Conducting is the art of directing a musical performance by way of visible gestures. The primary duties of the conductor are to unify performers, set the tempo, execute clear preparations and beats, and to listen critically and shape the sound of the ensemble...
, including Leonard Bernstein
Leonard Bernstein
Leonard Bernstein August 25, 1918 – October 14, 1990) was an American conductor, composer, author, music lecturer and pianist. He was among the first conductors born and educated in the United States of America to receive worldwide acclaim...
and Zubin Mehta
Zubin Mehta
Zubin Mehta is an Indian conductor of western classical music. He is the Music Director for Life of the Israel Philharmonic Orchestra.-Biography:...
, both of whom are prominent in the orchestra's history. Bernstein maintained close ties with the orchestra from 1947, and in 1988, the IPO bestowed on him the title of Laureate Conductor, which he retained until his death in 1990. Mehta has served as the IPO's Music Advisor since 1968. The IPO did not have a formal music director, but instead "music advisors", until 1977, when Mehta was appointed the IPO's first Music Director. In 1981, his title was elevated to Music Director for Life. Kurt Masur
Kurt Masur
Kurt Masur is a German conductor, particularly noted for his interpretation of German Romantic music.- Biography :Masur was born in Brieg, Lower Silesia, Germany and studied piano, composition and conducting in Leipzig, Saxony. Masur has been married three times...
is the IPO's Honorary Guest Conductor, a title granted to him in 1992. Yoel Levi
Yoel Levi
Yoel Levi is a musician and conductor. Born in Romania, he grew up in Israel. He studied at the Tel Aviv Academy of Music, earning a Master of Arts degree with distinction. He also studied at the Jerusalem Academy of Music under Mendi Rodan. Levi won the 1978 International Besançon Competition...
serves as Principal Guest Conductor.

With Mehta, the IPO has made a number of recordings for Decca
Decca Records
Decca Records began as a British record label established in 1929 by Edward Lewis. Its U.S. label was established in late 1934; however, owing to World War II, the link with the British company was broken for several decades....
. Under the baton of Bernstein
Leonard Bernstein
Leonard Bernstein August 25, 1918 – October 14, 1990) was an American conductor, composer, author, music lecturer and pianist. He was among the first conductors born and educated in the United States of America to receive worldwide acclaim...
, the IPO also recorded his works and those of Igor Stravinsky
Igor Stravinsky
Igor Fyodorovich Stravinsky ; 6 April 1971) was a Russian, later naturalized French, and then naturalized American composer, pianist, and conductor....
. The IPO has also collaborated with Japanese composer Yoko Kanno
Yoko Kanno
is a composer, arranger and musician best known for her work on the soundtracks for many games, anime films, TV series, live-action movies, and advertisements...
in the soundtrack of the anime
Anime
is the Japanese abbreviated pronunciation of "animation". The definition sometimes changes depending on the context. In English-speaking countries, the term most commonly refers to Japanese animated cartoons....
Macross Plus
Macross Plus
is a four-episode anime OVA and theatrical movie in the Macross series. It was the first sequel to the original Macross television series that took place in the official timeline...
.

, the composers whose works have been most frequently performed by the IPO were Beethoven
Ludwig van Beethoven
Ludwig van Beethoven was a German composer and pianist. A crucial figure in the transition between the Classical and Romantic eras in Western art music, he remains one of the most famous and influential composers of all time.Born in Bonn, then the capital of the Electorate of Cologne and part of...
, Mozart
Wolfgang Amadeus Mozart
Wolfgang Amadeus Mozart , baptismal name Johannes Chrysostomus Wolfgangus Theophilus Mozart , was a prolific and influential composer of the Classical era. He composed over 600 works, many acknowledged as pinnacles of symphonic, concertante, chamber, piano, operatic, and choral music...
, Brahms
Johannes Brahms
Johannes Brahms was a German composer and pianist, and one of the leading musicians of the Romantic period. Born in Hamburg, Brahms spent much of his professional life in Vienna, Austria, where he was a leader of the musical scene...
, Mendelssohn
Felix Mendelssohn
Jakob Ludwig Felix Mendelssohn Barthóldy , use the form 'Mendelssohn' and not 'Mendelssohn Bartholdy'. The Grove Dictionary of Music and Musicians gives ' Felix Mendelssohn' as the entry, with 'Mendelssohn' used in the body text...
and Dvořák
Antonín Dvorák
Antonín Leopold Dvořák was a Czech composer of late Romantic music, who employed the idioms of the folk music of Moravia and his native Bohemia. Dvořák’s own style is sometimes called "romantic-classicist synthesis". His works include symphonic, choral and chamber music, concerti, operas and many...
. The initial concerts of the Palestine Orchestra in December 1936, conducted by Toscanini
Arturo Toscanini
Arturo Toscanini was an Italian conductor. One of the most acclaimed musicians of the late 19th and 20th century, he was renowned for his intensity, his perfectionism, his ear for orchestral detail and sonority, and his photographic memory...
, featured the music of Richard Wagner
Richard Wagner
Wilhelm Richard Wagner was a German composer, conductor, theatre director, philosopher, music theorist, poet, essayist and writer primarily known for his operas...
. However, after the Kristallnacht
Kristallnacht
Kristallnacht, also referred to as the Night of Broken Glass, and also Reichskristallnacht, Pogromnacht, and Novemberpogrome, was a pogrom or series of attacks against Jews throughout Nazi Germany and parts of Austria on 9–10 November 1938.Jewish homes were ransacked, as were shops, towns and...
pogroms in November 1938, the orchestra has maintained a de facto ban on Wagner
Richard Wagner
Wilhelm Richard Wagner was a German composer, conductor, theatre director, philosopher, music theorist, poet, essayist and writer primarily known for his operas...
's work, due to that composer's antisemitism and the association of his music with Nazi Germany
Nazi Germany
Nazi Germany , also known as the Third Reich , but officially called German Reich from 1933 to 1943 and Greater German Reich from 26 June 1943 onward, is the name commonly used to refer to the state of Germany from 1933 to 1945, when it was a totalitarian dictatorship ruled by...
.

The Secretary-General of the orchestra is Avi Shoshani. The IPO has a subscriber base numbering 26,000. Commentators have noted the musically conservative tastes of the subscriber base.