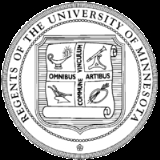 Overview
The University of Minnesota, Twin Cities (U of M) is a public research university
Public university
A public university is a university that is predominantly funded by public means through a national or subnational government, as opposed to private universities. A national university may or may not be considered a public university, depending on regions...
located in Minneapolis and St. Paul, Minnesota
Minnesota
Minnesota is a U.S. state located in the Midwestern United States. The twelfth largest state of the U.S., it is the twenty-first most populous, with 5.3 million residents. Minnesota was carved out of the eastern half of the Minnesota Territory and admitted to the Union as the thirty-second state...
, United States
United States
The United States of America is a federal constitutional republic comprising fifty states and a federal district...
. It is the oldest and largest part of the University of Minnesota system
University of Minnesota system
The University of Minnesota is a large university with several campuses spread throughout the U.S. state of Minnesota. There are five primary campuses in the Twin Cities, Duluth, Crookston, Morris, and Rochester. A campus was open in Waseca for a time. The university also operates several...
and has the fourth-largest main campus student body in the United States, with 52,557 students in 2011–2012. The university is considered a Public Ivy
Public Ivy
Public Ivy is a term coined by Richard Moll in his 1985 book Public Ivies: A Guide to America's best public undergraduate colleges and universities to refer to universities which "provide an Ivy League collegiate experience at a public school price." Public Ivies are considered, according to the...
by Green's Guide.