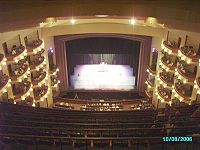 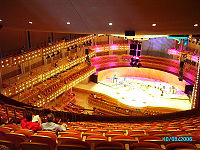 Adrienne Arsht Center for the Performing Arts, commonly called The Arsht Center, is Florida's largest performing arts
Performing arts
The performing arts are those forms art which differ from the plastic arts insofar as the former uses the artist's own body, face, and presence as a medium, and the latter uses materials such as clay, metal or paint which can be molded or transformed to create some physical art object...
center and is located on Biscayne Boulevard in the Omni neighborhood of Downtown
Downtown Miami
Downtown Miami is an urban residential neighborhood, and the central business district of Miami, Miami-Dade County, and South Florida in the United States...
, Miami, Florida
Florida
Florida is a state in the southeastern United States, located on the nation's Atlantic and Gulf coasts. It is bordered to the west by the Gulf of Mexico, to the north by Alabama and Georgia and to the east by the Atlantic Ocean. With a population of 18,801,310 as measured by the 2010 census, it...
, United States
United States
The United States of America is a federal constitutional republic comprising fifty states and a federal district...
. It is the second-largest performing arts center in the United States by area
Area
Area is a quantity that expresses the extent of a two-dimensional surface or shape in the plane. Area can be understood as the amount of material with a given thickness that would be necessary to fashion a model of the shape, or the amount of paint necessary to cover the surface with a single coat...
(not seats), after the Lincoln Center in New York City.

The Center was partly built on the grounds of a former Burdines
Burdines
Burdines was a leading department store chain in the state of Florida. The first Burdines store was opened in Bartow, Florida in 1896., Burdines became part of Federated Department Stores, Inc in 1956...
department store; it was an Art Deco
Art Deco
Art deco , or deco, is an eclectic artistic and design style that began in Paris in the 1920s and flourished internationally throughout the 1930s, into the World War II era. The style influenced all areas of design, including architecture and interior design, industrial design, fashion and...
building constructed in 1929, predating the Art Deco hotels on Ocean Drive
Ocean Drive (South Beach)
Ocean Drive is a street in South Beach—the southern part of Miami Beach, Florida. It is known for its Art Deco hotels. Ocean Drive is also the location of the famed , one of the most photographed houses in North America. The street is the center of the city's Art Deco District, which is home to...
. It was added to the United States National Register of Historic Places
National Register of Historic Places
The National Register of Historic Places is the United States government's official list of districts, sites, buildings, structures, and objects deemed worthy of preservation...
in 1997 as Sears, Roebuck and Company Department Store
Sears, Roebuck and Company Department Store (Miami, Florida)
The Sears, Roebuck and Company Department Store in Miami, Florida was an Art Deco building built in 1929. It was listed on the National Register of Historic Places....
. However, by 2001, the only surviving part of the original structure was a seven-story tower built by Sears, the space's successor. The department store space itself had been demolished. It was decided to preserve the tower and incorporate it into the new performing arts center.

The Center opened as the "Carnival Center" (later to be renamed the Arsht Center in 2008) with a grand opening on October 5, 2006 with many famous performers, politicians and movie stars attending, including Gloria Estefan
Gloria Estefan
Gloria María Milagrosa Fajardo García de Estefan; known professionally as Gloria Estefan is a Cuban-born American singer, songwriter, and actress. Known as the "Queen Of Latin Pop", she is in the top 100 best selling music artists with over 100 million albums sold worldwide, 31.5 million of those...
, Jeb Bush
Jeb Bush
John Ellis "Jeb" Bush is an American politician who served as the 43rd Governor of Florida from 1999 to 2007. He is a prominent member of the Bush family: the second son of former President George H. W. Bush and former First Lady Barbara Bush; the younger brother of former President George W...
, Andy García
Andy García
Andrés Arturo García Menéndez , professionally known as Andy García, is a Cuban American actor. He became known in the late 1980s and 1990s, having appeared in several successful Hollywood films, including The Godfather: Part III, The Untouchables, Internal Affairs and When a Man Loves a Woman...
and Bernadette Peters
Bernadette Peters
Bernadette Peters is an American actress, singer and children's book author from Ozone Park, Queens, New York. Over the course of a career that has spanned five decades, she has starred in musical theatre, films and television, as well as performing in solo concerts and recordings...
.

Designed by the distinguished architect
Architect
An architect is a person trained in the planning, design and oversight of the construction of buildings. To practice architecture means to offer or render services in connection with the design and construction of a building, or group of buildings and the space within the site surrounding the...
, Cesar Pelli
César Pelli
César Pelli is an Argentine architect known for designing some of the world's tallest buildings and other major urban landmarks. In 1991, the American Institute of Architects listed Pelli among the ten most influential living American architects...
, the Center occupies 570000 square feet (52,954.7 m²), straddling both sides of Biscayne Boulevard which are connected by a pedestrian bridge.

Acoustics were designed by Russell Johnson of Artec Consultants company. He is mostly known for the Kimmel Center in Philadelphia and the Meyerson Symphony Center in Dallas.


Performing arts and other venues

The Cleveland Orchestra
Cleveland Orchestra
The Cleveland Orchestra is an American orchestra based in Cleveland, Ohio. It is one of the five American orchestras informally referred to as the "Big Five". Founded in 1918, the orchestra plays most of its concerts at Severance Hall...
and its conductor Franz Welser-Möst
Franz Welser-Möst
Franz Welser-Möst is an Austrian conductor who is currently the music director for the Cleveland Orchestra and the Vienna State Opera.- Biography :...
presents a three-week residency each year. The Center has four resident companies which present seasons throughout the year in the Center's halls. Resident companies include: The New World Symphony
New World Symphony Orchestra
The New World Symphony is the United States' only full-time orchestral academy preparing musicians for careers in symphony orchestras and ensembles...
, the Miami City Ballet
Miami City Ballet
Miami City Ballet is an American ballet company based in Miami Beach, Florida. It was created in 1986 by former New York City Ballet principal dancer Edward Villella and flourishes today as one of America's most respected ballet companies...
and the Florida Grand Opera
Florida Grand Opera
Florida Grand Opera is an American opera company based in Miami, Florida. FGO was created in 1994 from the consolidation of two opera companies in the Miami-Fort Lauderdale region:...
.

There are three main venues:

The concert hall seats 2,200. Its stage extends into the audience and there is seating behind the stage for 200 additional spectators or for a chorus. The orchestra level can be transformed into a "Grand Ballroom" with a festival floor configuration for dining and dancing for up to 850 people. The floor is installed over the seats.

A flexible black-box space designed for up to 200 seats.

In addition, there are two smaller multi-purpose venues: