Encyclopedia
is a prefecture
Prefectures of Japan
The prefectures of Japan are the country's 47 subnational jurisdictions: one "metropolis" , Tokyo; one "circuit" , Hokkaidō; two urban prefectures , Osaka and Kyoto; and 43 other prefectures . In Japanese, they are commonly referred to as...
of Japan
Japan
Japan is an island nation in East Asia. Located in the Pacific Ocean, it lies to the east of the Sea of Japan, China, North Korea, South Korea and Russia, stretching from the Sea of Okhotsk in the north to the East China Sea and Taiwan in the south...
located in the Chūbu region
Chubu region
The is the central region of Honshū, Japan's main island. Chūbu has a population estimate of 21,886,324 as of 2008.Chūbu, which means "central region", encompasses nine prefectures : Aichi, Fukui, Gifu, Ishikawa, Nagano, Niigata, Shizuoka, Toyama, Yamanashi, and often Mie.It is located directly...
of the island of Honshū
Honshu
is the largest island of Japan. The nation's main island, it is south of Hokkaido across the Tsugaru Strait, north of Shikoku across the Inland Sea, and northeast of Kyushu across the Kanmon Strait...
. The capital is the city of Nagano
Nagano, Nagano
, the capital city of Nagano Prefecture, is located in the northern part of the prefecture near the confluence of the Chikuma and the Sai rivers, on the main Japanese island of Honshū.As of April 1, 2011 the city has a population of 387,146...
. 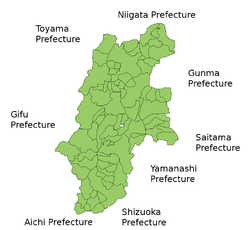 Nagano was formerly known as the province of Shinano
Shinano Province
or is an old province of Japan that is now present day Nagano Prefecture.Shinano bordered on Echigo, Etchū, Hida, Kai, Kōzuke, Mikawa, Mino, Musashi, Suruga, and Tōtōmi Provinces...
. This province was divided among many local daimyo
Daimyo
is a generic term referring to the powerful territorial lords in pre-modern Japan who ruled most of the country from their vast, hereditary land holdings...
during the Sengoku period.

Nagano was host to the 1998 Winter Olympics
1998 Winter Olympics
The 1998 Winter Olympics, officially the XVIII Olympic Winter Games, was a winter multi-sport event celebrated from 7 to 22 February 1998 in Nagano, Japan. Seventy-two nations and 2,176 participans contested in seven sports and 72 events at 15 venues. The games saw the introduction of Women's ice...
, which gained the prefecture international recognition as well as gaining the prefecture a Shinkansen
Shinkansen
The , also known as THE BULLET TRAIN, is a network of high-speed railway lines in Japan operated by four Japan Railways Group companies. Starting with the Tōkaidō Shinkansen in 1964, the network has expanded to currently consist of of lines with maximum speeds of , of Mini-shinkansen with a...
line to Tokyo
Tokyo
, ; officially , is one of the 47 prefectures of Japan. Tokyo is the capital of Japan, the center of the Greater Tokyo Area, and the largest metropolitan area of Japan. It is the seat of the Japanese government and the Imperial Palace, and the home of the Japanese Imperial Family...
.

Nine of the twelve highest mountains in Japan can be found in this inland prefecture. Nagano is also the prefecture which is bordered by the highest number of other prefectures in Japan and it contains the location which is the furthest point from the ocean anywhere in Japan. Lakes featured within the region include Lake Kizaki
Lake Kizaki
is a lake, situated near Ōmachi, Nagano, Japan, and located at the foot of the northern Japanese Alps mountain range. Mesotrophic and subalpine in nature, numerous lakeside attractions surround the lake, with the locale being a popular lakeside resort...
, a beach resort popular for its water attractions and games.

The province's mountains have made it relatively isolated, and many people come for its mountain resorts and hot springs.

These are the towns and villages in each district
Districts of Japan
The was most recently used as an administrative unit in Japan between 1878 and 1921 and is roughly equivalent to the county of the United States, ranking at the level below prefecture and above city, town or village. As of 2008, cities belong directly to prefectures and are independent from...
: 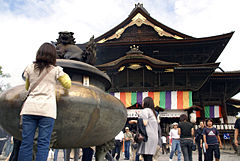 Changhua County
Changhua County
Changhua County is the smallest county in Taiwan located on the westside of Taiwan. It is officially governed as a county of the Republic of China .-Urban townships:# Beidou Township # Erlin Township...
, Taiwan
Taiwan
Taiwan , also known, especially in the past, as Formosa , is the largest island of the same-named island group of East Asia in the western Pacific Ocean and located off the southeastern coast of mainland China. The island forms over 99% of the current territory of the Republic of China following...
(2008) Clearwater, Florida
Clearwater, Florida
Clearwater is a city located in Pinellas County, Florida, US, nearly due west of Tampa and northwest of St. Petersburg. In the west of Clearwater lies the Gulf of Mexico and in the east lies Tampa Bay. As of the 2000 census, the city had a total population of 108,787. It is the county seat of...
, United States
United States
The United States of America is a federal constitutional republic comprising fifty states and a federal district...