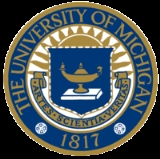 Overview
The University of Michigan (commonly referred to as Michigan, U-M, UMich, or U of M) is a public
Public university
A public university is a university that is predominantly funded by public means through a national or subnational government, as opposed to private universities. A national university may or may not be considered a public university, depending on regions...
research university located in Ann Arbor, Michigan
Ann Arbor, Michigan
Ann Arbor is a city in the U.S. state of Michigan and the county seat of Washtenaw County. The 2010 census places the population at 113,934, making it the sixth largest city in Michigan. The Ann Arbor Metropolitan Statistical Area had a population of 344,791 as of 2010...
in the United States
United States
The United States of America is a federal constitutional republic comprising fifty states and a federal district...
. It is the state's oldest university and the flagship campus of the University of Michigan. U-M also has satellite campuses in Flint and Dearborn.