Encyclopedia
Wolf Trap National Park for the Performing Arts, known locally in the Washington, D.C.
Washington, D.C.
Washington, D.C., formally the District of Columbia and commonly referred to as Washington, "the District", or simply D.C., is the capital of the United States. On July 16, 1790, the United States Congress approved the creation of a permanent national capital as permitted by the U.S. Constitution....
area as simply Wolf Trap, is a performing arts center located on 130 acres (0.53 km²) of national park land in Wolf Trap
Wolf Trap, Virginia
Wolf Trap is a census-designated place in Fairfax County, Virginia, United States. The population was 14,001 at the 2000 census. Wolf Trap National Park for the Performing Arts is located in the CDP.-Geography:...
, Virginia
Virginia
The Commonwealth of Virginia , is a U.S. state on the Atlantic Coast of the Southern United States. Virginia is nicknamed the "Old Dominion" and sometimes the "Mother of Presidents" after the eight U.S. presidents born there...
. Through a partnership and collaboration of the National Park Service
National Park Service
The National Park Service is the U.S. federal agency that manages all national parks, many national monuments, and other conservation and historical properties with various title designations...
and the non-profit Wolf Trap Foundation, Wolf Trap National Park for the Performing Arts offers both natural and cultural resources.

Wolf Trap National Park for the Performing Arts began as a donation from Catherine Filene Shouse
Catherine Filene Shouse
Catherine Filene Shouse was a researcher and philanthropist. She graduated in 1918 from Wheaton College in Norton, Massachusetts. She worked for the Women's Division of the U.S. Employment Service of the Department of Labor, and the Democratic National Committee...
. Encroaching roads and suburbs led Mrs. Shouse to preserve this former farm as a park. In 1966 Congress accepted Mrs. Shouse's gift and authorized Wolf Trap Farm Park (its original name) as the first national park for the performing arts. On August 21, 2002, the park's name was changed to its present one, thus reflecting its mission while keeping the historical significance of this area.

In the year 2000, Wolf Trap debuted the Face of America program “to celebrate the country’s national parks and to honor the relationship between nature and the creative process." 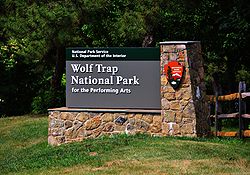 Presently, the Wolf Trap Foundation organizes and runs several distinct elements as part of the whole. These are:
This is the major indoor/outdoor performance venue with seating for 7,000 both under cover and on the lawn in a more casual style. Performances are given nightly from May to early September and cover a wide range of musical styles from country music to opera.

In the summer of 1971, sixty young musical performers were chosen for training in music, dance and acting, to culminate in a production in the newly conceived Filene Center. The inaugural season opening was delayed one month due to a fire that destroyed most of the nearly built center. But when finally completed, the theatre, constructed of Oregon
Oregon
Oregon is a state in the Pacific Northwest region of the United States. It is located on the Pacific coast, with Washington to the north, California to the south, Nevada on the southeast and Idaho to the east. The Columbia and Snake rivers delineate much of Oregon's northern and eastern...
redcedar, was a ten-story-high facility equipped with a computerized lighting system and sophisticated sound equipment.

As Wolf Trap was preparing for its 12th season, tragedy struck once again. On April 4, 1982, a fire of undetermined origin, intensified by high gusting winds, destroyed the Filene Center. Almost immediately the Wolf Trap Foundation, the park's non-profit partner, announced that a 1982 season would still take place in a huge tent erected in the meadow.

The second Filene Center is made of douglas-fir
Douglas-fir
Douglas-fir is one of the English common names for evergreen coniferous trees of the genus Pseudotsuga in the family Pinaceae. Other common names include Douglas tree, and Oregon pine. There are five species, two in western North America, one in Mexico, and two in eastern Asia...
with a yellow pine
Yellow pine
Yellow pine may refer to the following:*Certain pines in the subgenus Pinus subgenus Pinus:**In American forestry, a term for several closely related species of pine with yellow tinted wood, including the Southern Yellow Pines , and the non-Southern yellow pines and several others...
ceiling. It includes a smoke/fire detection and suppression system, as well as fire retardant wood. The new amphitheater was also built with state-of-the-art sound and lighting equipment.
Wolf Trap's indoor venue is a casual performance space which operates year-round and offers a very wide variety of entertainment possibilies. It seats 382. 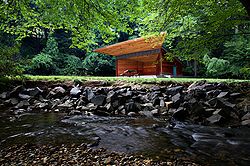 This young Company, established in 1971, has developed into a quality resident ensemble program for young opera singers. Its mission is to discover and encourage emerging talent in the opera field and it serves young singers of achievement and potential by giving them training and performance experience with fully staged performances each summer at the Filene Center and The Barns.
With 70 performances from late June through early August, Children’s Theatre-in-the-Woods presents family-friendly shows at 10 am and 11:15 am on Tuesdays through Saturdays. Amidst 117 rolling wooded acres and nestled in a shady grove, the stage is set for lively adventures in music, dance, storytelling, puppetry, and theater. All performances are recommended for children between Kindergarten and 6th grade.
Wolf Trap offers a wide variety of education programs for all ages both locally and nationally. Programs include the "Wolf Trap Institute for Early Learning Through the Arts" for preschoolers through adult learners.

Donation of the land

Early records of Fairfax County tell that wolves ran wild in Wolf Trap, and bounties were granted for trapping them. In August, 1739, J.M. Warner placed "Wolf Trap Creek," a branch of Difficult Run, in his survey, evidence that the name has been used for over 260 years. In 1930, Catherine Filene Shouse acquired approximately 53 acres (21 ha) of land in the region and chose to preserve the name. By 1956, her holdings encompassed 168 acres (68 ha).

Mrs. Shouse bought Wolf Trap to offer her children a weekend retreat from their home in Georgetown
Georgetown, Washington, D.C.
Georgetown is a neighborhood located in northwest Washington, D.C., situated along the Potomac River. Founded in 1751, the port of Georgetown predated the establishment of the federal district and the City of Washington by 40 years...
, Washington DC. There they grew corn, wheat, alfalfa, and oats to feed their chickens, ducks, turkeys, and milk cows. They raised horses, built a stable and a hay barn, and opened a dog-breeding kennel, producing champion
Champion
A champion is the victor in a challenge, contest or competition.There can be a territorial pyramid of championships, e.g. local, regional / provincial, state, national, continental and world championships, and even further divisions at one or more of these levels, as in soccer. Their champions...
boxers
Boxer (dog)
Developed in Germany, the Boxer is a breed of stocky, medium-sized, short-haired dog. The coat is smooth and fawn or brindled, with or without white markings. Boxers are brachycephalic , and have a square muzzle, mandibular prognathism , very strong jaws and a powerful bite ideal for hanging on to...
, miniature pinschers
Miniature Pinscher
The Miniature Pinscher is a small breed of dog, originating from Germany. The breed's earliest ancestors were a mix of Italian Greyhounds and Dachshunds...
, and Weimaraner
Weimaraner
The Weimaraner is a dog that was originally bred for hunting in the early 19th century. Early Weimaraners were used by royalty for hunting large game such as boar, bear, and deer. As the popularity of large game hunting began to decline, Weimaraners were used for hunting smaller animals like...
s.

Other highlights included Sarah Caldwell
Sarah Caldwell
Sarah Caldwell was a notable American opera conductor, impresario, and stage director of opera.- Life :Caldwell was born in Maryville, Missouri, and grew up in Fayetteville, Arkansas. She was a child prodigy and gave public performances on the violin by the time she was ten years old...
's opera War and Peace, the Royal Ballet, Preservation Hall Jazz Band
Preservation Hall Jazz Band
Preservation Hall Jazz Band is the name for numerous groups of Dixieland Jazz and traditional jazz bands at Preservation Hall in New Orleans, Louisiana, and on tours as organized by the Preservation Hall...
, the annual US National Symphony Orchestra's 1812 Overture
1812 Overture
The Year 1812, Festival Overture in E flat major, Op. 49, popularly known as the 1812 Overture or the Overture of 1812 is an overture written by Russian composer Pyotr Ilyich Tchaikovsky in 1880 to commemorate Russia's defense of Moscow against Napoleon's advancing Grande Armée at the Battle of...
concerts with live cannons and Beverly Sills
Beverly Sills
Beverly Sills was an American operatic soprano whose peak career was between the 1950s and 1970s. In her prime she was the only real rival to Joan Sutherland as the leading bel canto stylist...
' 1981 farewell appearance.

Following yet another Filene Center fire, the 1982 and 1983 Wolf Trap seasons took place in a huge tent-like structure known as the Meadow Center. The prefabricated structure, purchased with private and government funds, was disassembled from its previous site in the United Arab Emirates
United Arab Emirates
The United Arab Emirates, abbreviated as the UAE, or shortened to "the Emirates", is a state situated in the southeast of the Arabian Peninsula in Western Asia on the Persian Gulf, bordering Oman, and Saudi Arabia, and sharing sea borders with Iraq, Kuwait, Bahrain, Qatar, and Iran.The UAE is a...
and transported to Wolf Trap by the government of Saudi Arabia
Saudi Arabia
The Kingdom of Saudi Arabia , commonly known in British English as Saudi Arabia and in Arabic as as-Sa‘ūdiyyah , is the largest state in Western Asia by land area, constituting the bulk of the Arabian Peninsula, and the second-largest in the Arab World...
. Volunteers provided much of the labor needed to erect the structure.

An Act of Congress

An Act
To provide for the establishment of the Wolf Trap Farm Park in Fairfax County, Virginia, and for other purposes.

Be it enacted by the Senate and House of Representatives of the United States of America in Congress assembled, that for the purpose of establishing in the National Capital area a park for the performing arts and related educational programs, and for recreation use in connection therewith, the Secretary of the Interior is authorized to establish, develop, improve, operate, and maintain the Wolf Trap Farm Park in Fairfax County, Virginia. The park shall encompass the portions of the property formerly known as Wolf Trap Farm and Symphony in Fairfax County, Virginia, to be donated for park purposes to the United States, and such additional lands or interests therein as the Secretary may acquire for purposes of the park by donation or purchase with donated or appropriated funds, the aggregate of which shall not exceed one hundred and forty-five acres [58.7 ha].

Sec. 3. There are authorized to be appropriated such sums as may appropriation be necessary, but not in excess of $600,000, per annum to carry out the purposes of this Act.