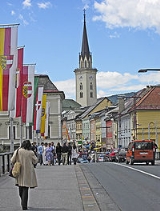 Encyclopedia
Villach (ˈfɪlax; , ) is the second largest city in the Carinthia
Carinthia (state)
Carinthia is the southernmost Austrian state or Land. Situated within the Eastern Alps it is chiefly noted for its mountains and lakes.The main language is German. Its regional dialects belong to the Southern Austro-Bavarian group...
state in the southern Austria
Austria
Austria , officially the Republic of Austria , is a landlocked country of roughly 8.4 million people in Central Europe. It is bordered by the Czech Republic and Germany to the north, Slovakia and Hungary to the east, Slovenia and Italy to the south, and Switzerland and Liechtenstein to the...
, at the Drava
Drava
Drava or Drave is a river in southern Central Europe, a tributary of the Danube. It sources in Toblach/Dobbiaco, Italy, and flows east through East Tirol and Carinthia in Austria, into Slovenia , and then southeast, passing through Croatia and forming most of the border between Croatia and...
River and represents an important traffic junction
Junction (traffic)
A junction, when discussed in the context of transport, is a location where traffic can change between different routes, directions, or sometimes modes, of travel.-Historical significance:...
for Austria and the whole Alpe-Adria
Alpe-Adria
Alpe-Adria is a bioregion in Central Europe, embracing all of Slovenia, the Austrian states of Carinthia and Styria, and the Italian regions of Friuli-Venezia-Giulia and Veneto. , it is the subject of a proposal to create the world's first organic bioregion....
region. , the population is 58,480. 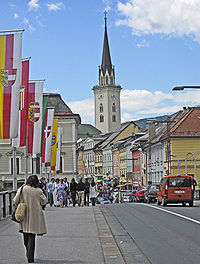 The oldest human traces found in Villach date back to 3500 BC. Many Roman
Roman Empire
The Roman Empire was the post-Republican period of the ancient Roman civilization, characterised by an autocratic form of government and large territorial holdings in Europe and around the Mediterranean....
artifacts have been discovered in the city, as it was near an important Roman road called the Römerweg. A document mentions a bridge in what is today Villach in 878, and the settlement across the bridge was given market town status in 1060, though Villach is first mentioned in records in 1240. Villach's first mayor took office in the 16th century.

On January 25, 1348, an earthquake destroyed a large part of Villach, followed by another earthquake in 1690. There were also several fires in Villach, which destroyed many buildings.

In 1759 Empress Maria Theresa of Austria
Maria Theresa of Austria
Maria Theresa Walburga Amalia Christina was the only female ruler of the Habsburg dominions and the last of the House of Habsburg. She was the sovereign of Austria, Hungary, Croatia, Bohemia, Mantua, Milan, Lodomeria and Galicia, the Austrian Netherlands and Parma...
formally purchased Villach, as well as much of Carinthia. During the Napoleonic Wars, Villach was part of the Illyrian provinces
Illyrian provinces
The Illyrian Provinces was an autonomous province of the Napoleonic French Empire on the north and east coasts of the Adriatic Sea between 1809 and 1816. Its capital was established at Laybach...
of the French Empire from 1809 until 1813.

During the period of the German Anschluss
Anschluss
The Anschluss , also known as the ', was the occupation and annexation of Austria into Nazi Germany in 1938....
(1938-45) when Austria was annexed to Nazi Germany
Nazi Germany
Nazi Germany , also known as the Third Reich , but officially called German Reich from 1933 to 1943 and Greater German Reich from 26 June 1943 onward, is the name commonly used to refer to the state of Germany from 1933 to 1945, when it was a totalitarian dictatorship ruled by...
, the mayor of Villach was Oskar Kraus, an enthusiastic Nazi. A memorial for the 1919 border conflict
Carinthian Plebiscite
The Carinthian Plebiscite on 10 October 1920 determined the final southern border between the Republic of Austria and the newly formed Kingdom of Serbs, Croats and Slovenes after World War I.- History :...
caused controversy when it was inaugurated in 2002, as Kraus, who had not been especially prominent in the conflict, was the only person named.

During World War II
World War II
World War II, or the Second World War , was a global conflict lasting from 1939 to 1945, involving most of the world's nations—including all of the great powers—eventually forming two opposing military alliances: the Allies and the Axis...
, allied forces bombed Villach 37 times. About 42,500 bombs killed 300 people and damaged 85% of the buildings. Nevertheless the city quickly recovered.

Today, Villach is a bustling city with commerce and recreation, yet it retains its historic background.

The following sections belong to Villach:

In 1905 a part of the municipal area St. Martin was incorporated. In 1973 the city area was further enlarged through the incorporation of Landskron, Maria Gail and Fellach.

The municipal council (Gemeinderat) consists of 45 members, with the mayor as president, and following the 2009 elections is composed of:

The city government of Villach (Stadtsenat) consists of seven members. It is chaired by the mayor, who is directly elected by the people. The other members—two vice-mayors and four town councillors—are appointed by the municipal council, with party affiliations according to the election results.

Villach is twinned
Town twinning
Twin towns and sister cities are two of many terms used to describe the cooperative agreements between towns, cities, and even counties in geographically and politically distinct areas to promote cultural and commercial ties.- Terminology :...
with:
Bamberg
Bamberg
Bamberg is a city in Bavaria, Germany. It is located in Upper Franconia on the river Regnitz, close to its confluence with the river Main. Bamberg is one of the few cities in Germany that was not destroyed by World War II bombings because of a nearby Artillery Factory that prevented planes from...
(Germany
Germany
Germany , officially the Federal Republic of Germany , is a federal parliamentary republic in Europe. The country consists of 16 states while the capital and largest city is Berlin. Germany covers an area of 357,021 km2 and has a largely temperate seasonal climate...
) Udine
Udine
Udine is a city and comune in northeastern Italy, in the middle of Friuli-Venezia Giulia region, between the Adriatic sea and the Alps , less than 40 km from the Slovenian border. Its population was 99,439 in 2009, and that of its urban area was 175,000.- History :Udine is the historical...
(Italy
Italy
Italy , officially the Italian Republic languages]] under the European Charter for Regional or Minority Languages. In each of these, Italy's official name is as follows:;;;;;;;;), is a unitary parliamentary republic in South-Central Europe. To the north it borders France, Switzerland, Austria and...
) Suresnes
Suresnes
Suresnes is a commune in the western suburbs of Paris, France. It is located from the center of Paris. The nearest communes are Neuilly-sur-Seine, Puteaux, Rueil-Malmaison, Saint-Cloud and Boulogne-Billancourt...
(France
France
The French Republic , The French Republic , The French Republic , (commonly known as France , is a unitary semi-presidential republic in Western Europe with several overseas territories and islands located on other continents and in the Indian, Pacific, and Atlantic oceans. Metropolitan France...
) Springfield, Illinois
Springfield, Illinois
Springfield is the third and current capital of the US state of Illinois and the county seat of Sangamon County with a population of 117,400 , making it the sixth most populated city in the state and the second most populated Illinois city outside of the Chicago Metropolitan Area...
(USA)

There are several festival
Festival
A festival or gala is an event, usually and ordinarily staged by a local community, which centers on and celebrates some unique aspect of that community and the Festival....
s throughout the year: