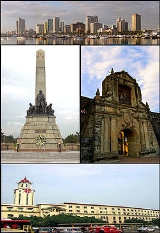 Manila is located on the eastern shores of Manila Bay
Manila Bay
Manila Bay is a natural harbor which serves the Port of Manila , in the Philippines.The bay is considered to be one of the best natural harbors in Southeast Asia and one of the finest in the world...
and is bordered by Navotas and Caloocan to the north, Quezon City
Quezon City
Quezon City is the former capital and the most populous city in the Philippines. Located on the island of Luzon, Quezon City is one of the cities and municipalities that make up Metro Manila, the National Capital Region. The city was named after Manuel L...
to the northeast, San Juan
San Juan, Metro Manila
The City of San Juan or simply San Juan is a city in Metro Manila in the Philippines. Before the creation of Metro Manila, it was part of Rizal Province. Currently the smallest city in the region and the country in terms of area, San Juan is one of the smallest among the cities and municipalities...
and Mandaluyong to the east, Makati on the southeast, and Pasay to the south.

What is the barangay number of tutuban Center, tondo Manila?
More

1571    Miguel Lopez de Legazpi founds Manila, the capital of the Republic of the Philippines.

1762    Seven Years' War: conclusion of the Battle of Manila between Britain and Spain, which resulted in the British occupation of Manila for the rest of the war.

1891    San Sebastian Church in Manila, the first all-steel church in Asia, is officially inaugurated and blessed.

1896    First Cry of the Philippine Revolution is made in Pugad Lawin (Quezon City), in the province of Manila.

1896    Eight provinces in the Philippines are declared under martial law by the Spanish Governor-General Ramón Blanco y Erenas. These were Manila, Cavite, Bulacan, Pampanga, Nueva Ecija, Bataan, Laguna, and Batangas.

1896    José Rizal is executed by firing squad in Manila.

1935    The ''China Clipper'' takes off from Alameda, California for its first commercial flight. It reaches its destination, Manila, a week later.

1945    World War II: The capital of the Philippines, Manila, is liberated by American forces.