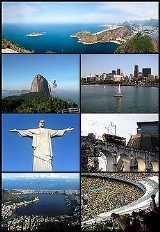 Overview
Rio de Janeiro commonly referred to simply as Rio, is the capital city of the State of Rio de Janeiro
Rio de Janeiro (state)
Rio de Janeiro is one of the 27 states of Brazil.Rio de Janeiro has the second largest economy of Brazil behind only São Paulo state.The state of Rio de Janeiro is located within the Brazilian geopolitical region classified as the Southeast...
, the second largest city of Brazil
Brazil
Brazil , officially the Federative Republic of Brazil , is the largest country in South America. It is the world's fifth largest country, both by geographical area and by population with over 192 million people...
, and the third largest metropolitan area and agglomeration in South America
South America
South America is a continent situated in the Western Hemisphere, mostly in the Southern Hemisphere, with a relatively small portion in the Northern Hemisphere. The continent is also considered a subcontinent of the Americas. It is bordered on the west by the Pacific Ocean and on the north and east...
, boasting approximately 6.3 million people within the city proper, making it the 6th largest
Largest Cities in the Americas
This is a list of the 50 largest cities in the Americas by population. Official definitions of cities are defined according to the concept of city proper, which is the territory within the city limits. The list ranks the world's urban municipal units according to population...
in the Americas, and 26th in the world.

The city was the capital of Brazil for nearly two centuries, from 1763 to 1815 during the Portuguese
Portugal
Portugal , officially the Portuguese Republic is a country situated in southwestern Europe on the Iberian Peninsula. Portugal is the westernmost country of Europe, and is bordered by the Atlantic Ocean to the West and South and by Spain to the North and East. The Atlantic archipelagos of the...
colonial era
Colony
In politics and history, a colony is a territory under the immediate political control of a state. For colonies in antiquity, city-states would often found their own colonies. Some colonies were historically countries, while others were territories without definite statehood from their inception....
, 1815 to 1821 as the capital of the United Kingdom of Portugal, Brazil and Algarves, 1822 to 1960 as an independent nation.

1502    The present-day location of Rio de Janeiro is first explored.

1960    Brasília, Brazil's capital, is officially inaugurated. At 9:30 am the Three Powers of the Republic are simultaneously transferred from the old capital, Rio de Janeiro.

1983    The original FIFA World Cup trophy, the Jules Rimet Trophy, is stolen from the headquarters of the Brazilian Football Confederation in Rio de Janeiro.

2009    Air France Flight 447 crashes into the Atlantic Ocean off the coast of Brazil on a flight from Rio de Janeiro to Paris. All 228 passengers and crew are killed.