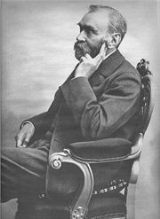 The Peace Prize is awarded in Oslo
Oslo
Oslo is a municipality, as well as the capital and most populous city in Norway. As a municipality , it was established on 1 January 1838. Founded around 1048 by King Harald III of Norway, the city was largely destroyed by fire in 1624. The city was moved under the reign of Denmark–Norway's King...
, Norway, while the other prizes are awarded in Stockholm
Stockholm
Stockholm is the capital and the largest city of Sweden and constitutes the most populated urban area in Scandinavia. Stockholm is the most populous city in Sweden, with a population of 851,155 in the municipality , 1.37 million in the urban area , and around 2.1 million in the metropolitan area...
, Sweden. Each Nobel Prize is regarded as the most prestigious award in its field.

I am doing research in Vedas which talks about Supportive therapy for curing Cancer. I invented this or you can say I discovered this by searching in ...

Lists of Nobel prizes winners in economics and their descriptions
More

How many Swiss scientists have won a Nobel Prize for Chemistry, Physics or Medicine since 1975?

Why not the bioengineers didn't win the Nobel prize in Physiology & Medicine? what are the basis of any grant this award???