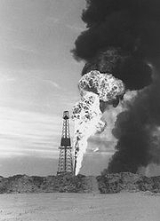 Overview
Edmonton is the capital of the Canadian
Canada
Canada is a North American country consisting of ten provinces and three territories. Located in the northern part of the continent, it extends from the Atlantic Ocean in the east to the Pacific Ocean in the west, and northward into the Arctic Ocean...
province
Provinces and territories of Canada
The provinces and territories of Canada combine to make up the world's second-largest country by area. There are ten provinces and three territories...
of Alberta
Alberta
Alberta is a province of Canada. It had an estimated population of 3.7 million in 2010 making it the most populous of Canada's three prairie provinces...
and is the province's second-largest city. Edmonton is located on the North Saskatchewan River
North Saskatchewan River
The North Saskatchewan River is a glacier-fed river that flows east from the Canadian Rockies to central Saskatchewan. It is one of two major rivers that join to make up the Saskatchewan River....
and is the centre of the Edmonton Capital Region
Edmonton Capital Region
The Edmonton Capital Region , also commonly referred to as the Alberta Capital Region, Greater Edmonton or Metro Edmonton, is a conglomeration of municipalities centred around Edmonton – Alberta's provincial capital....
, which is surrounded by the central region
Central Alberta
Central Alberta is a region located in the Canadian province of Alberta.Central Alberta is the most densely populated rural area in the province...
of the province.

The city and its census metropolitan area had populations of 730,372 and 1,034,945 as of the 2006 Census
Canada 2006 Census
The Canada 2006 Census was a detailed enumeration of the Canadian population. Census day was May 16, 2006. The next census following will be the 2011 Census. Canada's total population enumerated by the 2006 census was 31,612,897...
respectively, making it the northernmost North America
North America
North America is a continent wholly within the Northern Hemisphere and almost wholly within the Western Hemisphere. It is also considered a northern subcontinent of the Americas...
n city with a metropolitan population over one million.