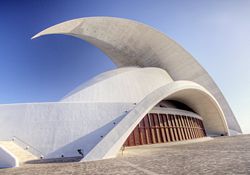 An auditorium is a room built to enable an audience to hear and watch performances at venues such as theatres. For movie theaters, the number of auditoriums is expressed as the number of screens.

The term is taken from Latin (from audītōrium, from audītōrius (“‘pertaining to hearing’”)); the concept is taken from the Greek auditorium, which had a series of semi-circular seating shelves in the theatre
Theatre of Ancient Greece
The theatre of Ancient Greece, or ancient Greek drama, is a theatrical culture that flourished in ancient Greece between c. 550 and c. 220 BC. The city-state of Athens, which became a significant cultural, political and military power during this period, was its centre, where it was...
, divided by broad 'belts', called diazomata, with eleven rows of seats between each.

The audience in a modern theatre are usually separated from the performers by the proscenium arch, although other types of stage
Stage (theatre)
In theatre or performance arts, the stage is a designated space for the performance productions. The stage serves as a space for actors or performers and a focal point for the members of the audience...
are common.

The price charged for seats in each part of the auditorium (known in the industry as the house) usually varies according to the quality of the view of the stage. The seating areas can include some or all of the following: