Encyclopedia
The San Francisco War Memorial and Performing Arts Center (SFWMPAC) is located in San Francisco, California
San Francisco, California
San Francisco , officially the City and County of San Francisco, is the financial, cultural, and transportation center of the San Francisco Bay Area, a region of 7.15 million people which includes San Jose and Oakland...
, and is one of the largest performing arts centers in the United States
United States
The United States of America is a federal constitutional republic comprising fifty states and a federal district...
. It covers three hectares (7.5 acre
Acre
The acre is a unit of area in a number of different systems, including the imperial and U.S. customary systems. The most commonly used acres today are the international acre and, in the United States, the survey acre. The most common use of the acre is to measure tracts of land.The acre is related...
s) in San Francisco's Civic Center
Civic Center, San Francisco, California
The Civic Center in San Francisco, California, is an area of a few blocks north of the intersection of Market Street and Van Ness Avenue that contains many of the city's largest government and cultural institutions. It has two large plazas and a number of buildings in classical architectural style...
Historic District with 7,500 seats in its several venues. Opera
Opera
Opera is an art form in which singers and musicians perform a dramatic work combining text and musical score, usually in a theatrical setting. Opera incorporates many of the elements of spoken theatre, such as acting, scenery, and costumes and sometimes includes dance...
, symphony
Symphony
A symphony is an extended musical composition in Western classical music, scored almost always for orchestra. A symphony usually contains at least one movement or episode composed according to the sonata principle...
, modern
Modern dance
Modern dance is a dance form developed in the early 20th century. Although the term Modern dance has also been applied to a category of 20th Century ballroom dances, Modern dance as a term usually refers to 20th century concert dance.-Intro:...
and classical dance
Ballet
Ballet is a type of performance dance, that originated in the Italian Renaissance courts of the 15th century, and which was further developed in France and Russia as a concert dance form. The early portions preceded the invention of the proscenium stage and were presented in large chambers with...
, theatre
Theatre
Theatre is a collaborative form of fine art that uses live performers to present the experience of a real or imagined event before a live audience in a specific place. The performers may communicate this experience to the audience through combinations of gesture, speech, song, music or dance...
, recital
Recital
A recital is a musical performance. It can highlight a single performer, sometimes accompanied by piano, or a performance of the works of a single composer.The invention of the solo piano recital has been attributed to Franz Liszt....
s, plays
Play (theatre)
A play is a form of literature written by a playwright, usually consisting of scripted dialogue between characters, intended for theatrical performance rather than just reading. There are rare dramatists, notably George Bernard Shaw, who have had little preference whether their plays were performed...
, lectures, meeting
Meeting
In a meeting, two or more people come together to discuss one or more topics, often in a formal setting.- Definitions :An act or process of coming together as an assembly for a common purpose....
s, receptions
Party
A party is a gathering of people who have been invited by a host for the purposes of socializing, conversation, or recreation. A party will typically feature food and beverages, and often music and dancing as well....
, special screenings
Feature film
In the film industry, a feature film is a film production made for initial distribution in theaters and being the main attraction of the screening, rather than a short film screened before it; a full length movie...
and gala events
Ball (dance)
A ball is a formal dance. The word 'ball' is derived from the Latin word "ballare", meaning 'to dance'; the term also derived into "bailar", which is the Spanish and Portuguese word for dance . In Catalan it is the same word, 'ball', for the dance event.Attendees wear evening attire, which is...
all have a place at the Center.

The SFWMPAC has historical significance. In 1945, the United Nations Charter
United Nations Charter
The Charter of the United Nations is the foundational treaty of the international organization called the United Nations. It was signed at the San Francisco War Memorial and Performing Arts Center in San Francisco, United States, on 26 June 1945, by 50 of the 51 original member countries...
was signed in the Veterans Building's Herbst Theatre
Herbst Theatre
The Herbst Theatre is an auditorium in the War Memorial and Performing Arts Center in Civic Center in San Francisco, United States. The 928-seat hall hosts programs as diverse as City Arts & Lectures, SF Jazz, and San Francisco Performances....
by the group of 50 founding nations, following the two-month-long United Nations
United Nations
The United Nations is an international organization whose stated aims are facilitating cooperation in international law, international security, economic development, social progress, human rights, and achievement of world peace...
conference in the Opera House. In 1951, the Treaty of San Francisco
Treaty of San Francisco
The Treaty of Peace with Japan , between Japan and part of the Allied Powers, was officially signed by 48 nations on September 8, 1951, at the War Memorial Opera House in San Francisco, California...
, formally ending World War II hostilities with Japan, was signed in the Opera House. The Center has been host to U.S. presidents and foreign heads of state. In 1990 the Center was chosen to host the first Goldman Environmental Prize
Goldman Environmental Prize
The Goldman Environmental Prize is a prize awarded annually to grassroots environmental activists, one from each of the world's six geographic regions: Africa, Asia, Europe, Islands and Island Nations, North America, and South and Central America. The prize includes a no-strings-attached award of...
ceremony, and this prize is now presented annually at the Center.

The following venues make up the SFWMPAC: 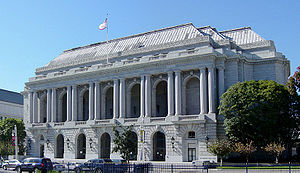