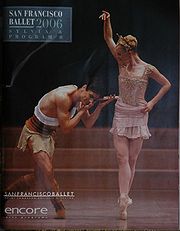 The San Francisco Ballet (SFB) is a ballet company
Ballet company
A ballet company is a group of dancers who perform ballet, plus managerial and support staff. Most major ballet companies employ dancers on a year-round basis, except in the United States, where contracts for part of the year are the norm...
, founded in 1933 as the San Francisco Opera Ballet. The company is currently based in the War Memorial Opera House
War Memorial Opera House (San Francisco)
The War Memorial Opera House in San Francisco, California is located on the western side of Van Ness Avenue across from the rear facade of City Hall. It is part of the San Francisco War Memorial and Performing Arts Center...
, San Francisco, under the direction of Helgi Tomasson. SFB is the first professional ballet company in the United States. It is among the world's leading dance companies, and along with American Ballet Theatre
American Ballet Theatre
American Ballet Theatre , based in New York City, was one of the foremost ballet companies of the 20th century. It continues as a leading dance company in the world today...
, and the New York City Ballet
New York City Ballet
New York City Ballet is a ballet company founded in 1948 by choreographer George Balanchine and Lincoln Kirstein. Leon Barzin was the company's first music director. Balanchine and Jerome Robbins are considered the founding choreographers of the company...
has been described as part of the "triumvirate of great classical companies defining the American style on the world stage today."

The company's first major production was Coppélia
Coppélia
Coppélia is a sentimental comic ballet with original choreography by Arthur Saint-Léon to a ballet libretto by Saint-Léon and Charles Nuitter and music by Léo Delibes. It was based upon two macabre stories by E. T. A. Hoffmann, Der Sandmann , and Die Puppe...
in 1938, choreographed by Willam Christensen
Willam Christensen
Willam Farr Christensen was an American ballet dancer, choreographer and founder of the San Francisco Ballet and Ballet West in Salt Lake City, Utah. He is known for bringing the complete version of the Russian ballet The Nutcracker to the United States, as well as staging the first American...
. In 1940 Swan Lake
Swan Lake
Swan Lake ballet, op. 20, by Pyotr Tchaikovsky, composed 1875–1876. The scenario, initially in four acts, was fashioned from Russian folk tales and tells the story of Odette, a princess turned into a swan by an evil sorcerer's curse. The choreographer of the original production was Julius Reisinger...
was produced in its entirety for the first time by Americans with principal ballerina Celina Cummings. The company also began showing The Nutcracker
The Nutcracker
The Nutcracker is a two-act ballet, originally choreographed by Marius Petipa and Lev Ivanov with a score by Pyotr Ilyich Tchaikovsky. The libretto is adapted from E.T.A. Hoffmann's story "The Nutcracker and the Mouse King". It was given its première at the Mariinsky Theatre in St...
during the holiday season, beginning Christmas Eve, 1944. This too was choreographed by Willam Christensen and was the first complete production of Tchaikovsky
Pyotr Ilyich Tchaikovsky
Pyotr Ilyich Tchaikovsky Pyotr Ilyich Tchaikovsky Pyotr Ilyich Tchaikovsky (Russian: Пётр Ильи́ч Чайко́вский ; often "Peter Ilich Tchaikovsky" in English. His names are also transliterated "Piotr" or "Petr"; "Ilitsch", "Il'ich" or "Illyich"; and "Tschaikowski", "Tschaikowsky", "Chajkovskij"...
's most popular piece in the United States.

1951 saw the next significant shift in administration of San Francisco Ballet. In this year, Lew Christensen
Lew Christensen
Lewellyn Farr "Lew" Christensen was a ballet dancer, choreographer and director for many companies. He was largely associated with George Balanchine and the San Francisco Ballet, which he directed from 1952–1984...
—the premier danseur at the time—partnered with Willam Christensen as co-directors. One year later, Lew took over entirely. With this new administration SFB began to broaden its horizons, travel, and establish itself as a significant American ballet company. Until 1956, San Francisco Ballet had remained on the West Coast
West Coast of the United States
West Coast or Pacific Coast are terms for the westernmost coastal states of the United States. The term most often refers to the states of California, Oregon, and Washington. Although not part of the contiguous United States, Alaska and Hawaii do border the Pacific Ocean but can't be included in...
, but Lew pushed the company into the Jacob's Pillow
Jacob's Pillow
Jacob’s Pillow Dance is a dance center, school and performance space located in Becket, Massachusetts, in the Berkshires. The organization is known for the oldest internationally acclaimed summer dance festival in the United States. The facility also includes a professional school and extensive...
Dance Festival in Massachusetts
Massachusetts
The Commonwealth of Massachusetts is a state in the New England region of the northeastern United States of America. It is bordered by Rhode Island and Connecticut to the south, New York to the west, and Vermont and New Hampshire to the north; at its east lies the Atlantic Ocean. As of the 2010...
. In 1957 SFB was the first American ballet company to tour the Far East, performing in eleven Asian nations. On New Year's Day in 1965, ABC-TV televised a one-hour abridgement of the Lew Christensen-choreographed production of "The Nutcracker", featuring San Francisco Ballet.

In 1972 Lew brought the company closer to its original home, the War Memorial Opera House, by officially naming the theatre as its official residence.

George Balanchine
George Balanchine
George Balanchine , born Giorgi Balanchivadze in Saint Petersburg, Russia, to a Georgian father and a Russian mother, was one of the 20th century's most famous choreographers, a developer of ballet in the United States, co-founder and balletmaster of New York City Ballet...
's choreography to WA Mozart
Wolfgang Amadeus Mozart
Wolfgang Amadeus Mozart , baptismal name Johannes Chrysostomus Wolfgangus Theophilus Mozart , was a prolific and influential composer of the Classical era. He composed over 600 works, many acknowledged as pinnacles of symphonic, concertante, chamber, piano, operatic, and choral music...
's music, staged by Elyse Borne with costumes after Karinska
Barbara Karinska
Varvara Jmoudsky, better known as Barbara Karinska or simply Karinska , was costumer of the New York City Ballet, and the first costume designer ever to win the Capezio Dance Award, for costumes "of visual beauty for the spectator and complete delight for the dancer".However, she designed the...
and Mark Stanley's lighting.

Mark Morris'
Mark Morris
Mark William Morris is an American dancer, choreographer and director whose work is acclaimed for its craftsmanship, ingenuity, humor, and at times eclectic musical accompaniments...
choreography to John Adams' music with Isaac Mizrahi
Isaac Mizrahi
Isaac Mizrahi is an American TV presenter, fashion designer, and was the creative director of Liz Claiborne. He is best known for his eponymous fashion lines.-Early life:...
's costumes and James F. Ingalls' lighting