The Fyris river (Fyrisån) neatly divides the city into two different parts: the historic quarter to the west of the river and the administrative, residential and commercial area to the east. Most of the features of interest are in the western part, dominated by the cathedral, and with its old streets, river views and parks.

The most outstanding building in Uppsala is the Domkyrka (Uppsala Cathedral
Uppsala Cathedral
Uppsala Cathedral is a cathedral located centrally in the city of Uppsala, Sweden. It dates back to the late 13th century and at a height of 118.7 m is the tallest church building in Scandinavia. Originally built under Roman Catholicism and used for coronations of the Swedish monarch, since the...
), Scandinavia's largest church (118.7 m (389.44 ft) high), which is visible from most parts of town and from the motorway.

Facing the west end of the cathedral is the Gustavianum
Gustavianum
Gustavianum is the former main building of Uppsala University, built 1622–1625 and named after King Gustavus Adolphus. Under the cupola is the theatrum anatomicum, the second oldest in the world added to the building in the mid 17th century by Olaus Rudbeck, professor of medicine and amateur...
, built in 1625 to be the main building of the University, and served as such through most of the 19th century. It contains the Museum of Nordic Antiquities, the Victoria Museum (of Egyptian antiquities) and the University's cultural history collections. It also houses a perfectly preserved 17th-century anatomical theatre (used in its time for public dissections). Across the street from the Gustavianum stands the new main building of the university, erected in 1879–86 in Italian renaissance style
Renaissance architecture
Renaissance architecture is the architecture of the period between the early 15th and early 17th centuries in different regions of Europe, demonstrating a conscious revival and development of certain elements of ancient Greek and Roman thought and material culture. Stylistically, Renaissance...
. The Uppsala University Coin Cabinet
Uppsala University Coin Cabinet
The Uppsala University Coin Cabinet is one of Sweden's most important public coin and medal collections, and situated at the Uppsala University Main Building. The history of the collection goes back to the 17th century. In total, it comprises close to 40,000 objects today.- References :* Elsa...
is located in the university main building.

On a circa 35-metre high hill to the southwest of the University Library stands Uppsala Castle
Uppsala Castle
Uppsala Castle is a 16th century royal castle in the historical city of Uppsala, Sweden. Throughout much of its early history, the castle played a major role in the history of Sweden....
. Its construction was initiated in 1549 by King Gustav Vasa, founder of the Vasa royal dynasty
House of Vasa
The House of Vasa was the Royal House of Sweden 1523-1654 and of Poland 1587-1668. It originated from a noble family in Uppland of which several members had high offices during the 15th century....
. Today the castle holds several museums, and is the residence of the Governor (landshövding).

5 km north of Uppsala city lies Gamla Uppsala
Gamla Uppsala
Gamla Uppsala is a parish and a village outside Uppsala in Sweden. It had 16,231 inhabitants in 1991.As early as the 3rd century AD and the 4th century AD and onwards, it was an important religious, economic and political centre...
(Old Uppsala), the location of the pre Christian town Uppsala. There are few remains, with the exception of several huge burial mounds of pre-Christian monarchs and the previous cathedral from 1164 A.D., traditionally said to be built over the old heathen temple
Temple at Uppsala
The Temple at Uppsala was a religious center in Norse paganism once located at what is now Gamla Uppsala , Sweden attested in Adam of Bremen's 11th century work Gesta Hammaburgensis ecclesiae pontificum and in Heimskringla, written by Snorri Sturluson in the 13th century...
(and recent archaeological investigations seems to support this notion). After the church burned down around 1240 only parts of it were restored. 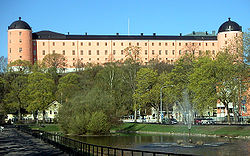 In addition to activities within the arena Fyrishov AB runs Tävlingsstdaden Uppsala in a collaboration between the sports organizers, Fyrishov AB, Uppsala, Uppsala Tourism and hotel business. Co-founded in 2006 by Fyrishov AB under the name SM-town Uppsala in 2007 but was expanded to include international events and competitions at high national level. The project aims to develop Uppsala, a leading sports town in Sweden. Year 2009 there were 24 SM-competitions and major national and international competitions in Uppsala.

At Fyrishov the city's basketball team Uppsala Basket
Uppsala Basket
Uppsala Basket is a Swedish basketball club playing in Uppsala , they play in the top Swedish basketball league Ligan. Uppsala Basket was founded in 1960 and plays it home games at Fyrishov. The club quickly became one of the top basketball clubs in Sweden....
also plays, former KFUM Uppsala, their home games in the Swedish basketball league. There are also athletic club Uppsala, Uppsala, fencing club, Uppsala Judo Club, Sweden's oldest judo club, Uppsala volleyball companion, Upsala weightlifting club and Upsala Simsällskap
Upsala Simsällskap
Upsala Simsällskap, the "Uppsala Swimming Society" , was founded in Uppsala in 1796. It is the oldest existing sports club in Sweden and claims to be the oldest swimming club in the world....
, one of the world's oldest swimmingclubs. The sport that draws the most audience is floorball. Uppsala's two teams in the Swedish Super League, Storvreta IBK and IK Sirius IBK, have Fyrishov as there home.

Once every year, the Uppsala Union of Science and Engineering Students arrange a river rafting in the Fyris river with rafts built by styrofoam.

Other sports clubs located in Uppsala include: 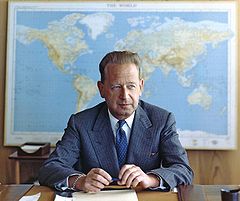 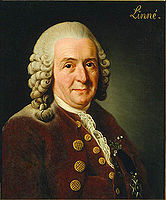