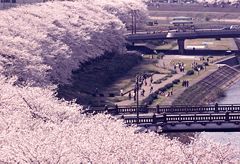 is the capital
Cities of Japan
||A is a local administrative unit in Japan. Cities are ranked on the same level as and , with the difference that they are not a component of...
of Fukui Prefecture
Fukui Prefecture
is a prefecture of Japan located in the Chūbu region on Honshū island. The capital is the city of Fukui.- Prehistory :The Kitadani Dinosaur Quarry, on the Sugiyama River within the city limits of Katsuyama, has yielded the Fukuiraptor kitadaniensis and Fukuisaurus tetoriensis as well as an unnamed...
, Japan
Japan
Japan is an island nation in East Asia. Located in the Pacific Ocean, it lies to the east of the Sea of Japan, China, North Korea, South Korea and Russia, stretching from the Sea of Okhotsk in the north to the East China Sea and Taiwan in the south...
. The city is located in the north-central part of the prefecture on the coast of the Sea of Japan
Sea of Japan
The Sea of Japan is a marginal sea of the western Pacific Ocean, between the Asian mainland, the Japanese archipelago and Sakhalin. It is bordered by Japan, North Korea, Russia and South Korea. Like the Mediterranean Sea, it has almost no tides due to its nearly complete enclosure from the Pacific...
.

As of November 1, 2009, the city has an estimated population
Population
A population is all the organisms that both belong to the same group or species and live in the same geographical area. The area that is used to define a sexual population is such that inter-breeding is possible between any pair within the area and more probable than cross-breeding with individuals...
of 267,428 and a density
Population density
Population density is a measurement of population per unit area or unit volume. It is frequently applied to living organisms, and particularly to humans...
of 499 persons per km². The total area is 536.17 km². Most of the population lives in a small central area; the city limits include rural plains, mountainous areas, and suburban sprawl along the Route 8 by-pass.

The city was incorporated under its present name on April 1, 1889, although it had been an important city in the region for at least 1000 years before that, serving as the capital of Echizen province during the Edo period (1603–1868).

Fukui was devastated by Allied bombing in 1945, and again by a major earthquake in 1948. The city has regained its energy and vitality. Hence, the city's official symbol—the phoenix
Phoenix (mythology)
The phoenix or phenix is a mythical sacred firebird that can be found in the mythologies of the Arabian, Persians, Greeks, Romans, Egyptians, Chinese, Indian and Phoenicians....
.

Fukui is home to several companies, including:

The Hokuriku Shinkansen
Hokuriku Shinkansen
The is a high-speed Shinkansen rail line under construction in Japan. The first section, between and , currently called the Nagano Shinkansen, opened on 1 October 1997.-Future:...
is currently under construction and will ultimately extend from Tokyo via Nagano
Nagano, Nagano
, the capital city of Nagano Prefecture, is located in the northern part of the prefecture near the confluence of the Chikuma and the Sai rivers, on the main Japanese island of Honshū.As of April 1, 2011 the city has a population of 387,146...
and Kanazawa
Kanazawa, Ishikawa
is the capital city of Ishikawa Prefecture, Japan.-Geography, climate, and population:Kanazawa sits on the Sea of Japan, bordered by the Japan Alps, Hakusan National Park and Noto Peninsula National Park. The city sits between the Sai and Asano rivers. Its total area is 467.77 km².Kanazawa's...
when completed.

National Route 8
Route 8 (Japan)
National Route 8 is an important highway in the Hokuriku and Kansai regions. It connects the prefectural capitals of Niigata, Toyama, Kanazawa , Fukui, Otsu , and Kyoto.-Route Data:*Length:...
, also known as the Fukui Bypass, parallels the Hokuriku Expressway through the city. Other major highways include:

New Brunswick
New Brunswick, New Jersey
New Brunswick is a city in Middlesex County, New Jersey, USA. It is the county seat and the home of Rutgers University. The city is located on the Northeast Corridor rail line, southwest of Manhattan, on the southern bank of the Raritan River. At the 2010 United States Census, the population of...
, New Jersey
New Jersey
New Jersey is a state in the Northeastern and Middle Atlantic regions of the United States. , its population was 8,791,894. It is bordered on the north and east by the state of New York, on the southeast and south by the Atlantic Ocean, on the west by Pennsylvania and on the southwest by Delaware...
, United States
United States
The United States of America is a federal constitutional republic comprising fifty states and a federal district...
(since May 1982) Hangzhou
Hangzhou
Hangzhou , formerly transliterated as Hangchow, is the capital and largest city of Zhejiang Province in Eastern China. Governed as a sub-provincial city, and as of 2010, its entire administrative division or prefecture had a registered population of 8.7 million people...
, Zhejiang
Zhejiang
Zhejiang is an eastern coastal province of the People's Republic of China. The word Zhejiang was the old name of the Qiantang River, which passes through Hangzhou, the provincial capital...
, China
People's Republic of China
China , officially the People's Republic of China , is the most populous country in the world, with over 1.3 billion citizens. Located in East Asia, the country covers approximately 9.6 million square kilometres...
(since November 1989) Winsen (Luhe)
Winsen (Luhe)
Winsen is the capital of the district of Harburg, in Lower Saxony, Germany. It is situated on the small river Luhe, near its confluence with the Elbe, approx. 25 km southeast of Hamburg, and 20 km northwest of Lüneburg....
, Lower Saxony
Lower Saxony
Lower Saxony is a German state situated in north-western Germany and is second in area and fourth in population among the sixteen states of Germany...
, Germany
Germany
Germany , officially the Federal Republic of Germany , is a federal parliamentary republic in Europe. The country consists of 16 states while the capital and largest city is Berlin. Germany covers an area of 357,021 km2 and has a largely temperate seasonal climate...
Fullerton
Fullerton, California
Fullerton is a city located in northern Orange County, California. As of the 2010 census, the city had a total population of 135,161.It was founded in 1887 by George and Edward Amerige and named for George H. Fullerton, who secured the land on behalf of the Atchison, Topeka and Santa Fe Railway...
, California
California
California is a state located on the West Coast of the United States. It is by far the most populous U.S. state, and the third-largest by land area...
, United States
United States
The United States of America is a federal constitutional republic comprising fifty states and a federal district...
(since November 1989) Suwon
Suwon
Suwon is the provincial capital of Gyeonggi-do, South Korea. A major city of over a million inhabitants, Suwon lies approximately south of Seoul. It is traditionally known as "The City of Filial Piety"....
, Gyeonggi-do
Gyeonggi-do
Gyeonggi-do is the most populous province in South Korea. The provincial capital is located at Suwon. Seoul—South Korea's largest city and national capital—is located in the heart of the province, but has been separately administered as a provincial-level special city since 1946...
, South Korea
South Korea
The Republic of Korea , , is a sovereign state in East Asia, located on the southern portion of the Korean Peninsula. It is neighbored by the People's Republic of China to the west, Japan to the east, North Korea to the north, and the East China Sea and Republic of China to the south...
(since December 2001)