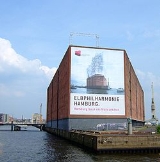 Encyclopedia
The Elbphilharmonie Hamburg is a concert hall under construction in the HafenCity
HafenCity
HafenCity is a quarter in the District of Hamburg-Mitte in Hamburg, Germany. It is located on the Elbe river island that use to be called Kehrwieder and Wandrahm....
quarter of Hamburg
Hamburg
-History:The first historic name for the city was, according to Claudius Ptolemy's reports, Treva.But the city takes its modern name, Hamburg, from the first permanent building on the site, a castle whose construction was ordered by the Emperor Charlemagne in AD 808...
, Germany. The concert hall is designed by Herzog & de Meuron
Herzog & de Meuron
Herzog & de Meuron Architekten, BSA/SIA/ETH is a Swiss architecture firm, founded and headquartered in Basel, Switzerland in 1978. The careers of founders and senior partners Jacques Herzog , and Pierre de Meuron , closely paralleled one another, with both attending the Swiss Federal Institute of...
on top of an old warehouse (Kaispeicher A). It will be the highest inhabited building of Hamburg.

On 2 April 2007 the First Mayor of Hamburg Ole von Beust
Ole von Beust
Carl-Friedrich Arp Ole Freiherr von Beust, generally called Ole von Beust, born April 13, 1955, in Hamburg, Germany, was First Mayor of the city-state of Hamburg from 31 October 2001 to 25 August 2010, serving as President of the Bundesrat from 1 November 2007 on for one year...
, Henner Mahlstedt, Hochtief
Hochtief
Hochtief Aktiengesellschaft is Germany's largest construction company. It is based in Essen but operates globally, ranking as the top general builder in the United States through its Turner Corporation subsidiary, and in Australia through the Leighton Group. In 2010 it employed more than 70,000...
Construction AG, project coordinator Hartmut Wegener, Hamburg Minister of Culture Karin von Welck and architect Pierre de Meuron were laying the foundation stone in the warehouse Kaispeicher A. In 2007, the construction was scheduled to be finished in 2010 with an estimated cost of €241 million.

In November 2008 as an endorsement to the original contract, the costs for the project were estimated at €450 million.