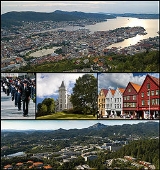 Overview
Bergen (ˈbærɡən) is the second largest city in Norway
Norway
Norway , officially the Kingdom of Norway, is a Nordic unitary constitutional monarchy whose territory comprises the western portion of the Scandinavian Peninsula, Jan Mayen, and the Arctic archipelago of Svalbard and Bouvet Island. Norway has a total area of and a population of about 4.9 million...
with a population of as of , . Bergen is the administrative centre of Hordaland
Hordaland
is a county in Norway, bordering Sogn og Fjordane, Buskerud, Telemark and Rogaland. Hordaland is the third largest county after Akershus and Oslo by population. The county administration is located in Bergen...
county. Greater Bergen or Bergen Metropolitan Area as defined by Statistics Norway
Statistics Norway
Statistics Norway is the Norwegian statistics bureau. It was established in 1876.Relying on a staff of about 1,000, Statistics Norway publish about 1,000 new statistical releases every year on its web site. All releases are published both in Norwegian and English...
, has a population of as of , .

Bergen is located in the county of Hordaland on the south-western coast of Norway.

Are there outside skating rinks in Bergen and are there youth hockey teams?
More
x