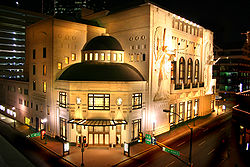 The Nancy Lee and Perry R. Bass Performance Hall in Fort Worth, Texas
Fort Worth, Texas
Fort Worth is the 16th-largest city in the United States of America and the fifth-largest city in the state of Texas. Located in North Central Texas, just southeast of the Texas Panhandle, the city is a cultural gateway into the American West and covers nearly in Tarrant, Parker, Denton, and...
is located in downtown
Downtown
Downtown is a term primarily used in North America by English speakers to refer to a city's core or central business district ....
Fort Worth near Sundance Square
Sundance Square
Sundance Square is the name of an area in downtown Fort Worth, Texas. Named after the Sundance Kid in western folklore, it is a popular place for nightlife and entertainment in Fort Worth and for tourists visiting the Dallas/Fort Worth Metroplex...
, occupies a whole city block, and was opened in 1998. It was built entirely with private funds and seats 2,056 people in a city with an estimated 2009 population of 720,250. It is regarded as an important symbol of one of the most successful downtown revitalization efforts in the country.
The European opera house-inspired limestone
Limestone
Limestone is a sedimentary rock composed largely of the minerals calcite and aragonite, which are different crystal forms of calcium carbonate . Many limestones are composed from skeletal fragments of marine organisms such as coral or foraminifera....
structure has been called the "crown jewel of downtown Fort Worth".

The Hall itself is renowned for its superb acoustics, exceptional sightlines and ambience on level with the great halls of the world. In fact, in an article by Daniel March in the March 1999 issue of Travel and Leisure magazine, it is described as “the newest star in the opera-house firmament…. Two giant, hand-carved trumpet-playing angels on the façade announce its welcome presence in the middle of downtown and, although surmounted by a dome that appears to float over trompe l'oeil clouds (built in) a mixture of Beaux-Arts and Vienna Secessionist styles”.

In 2001, the adjacent Maddox-Muse Center officially opened; and with it, the new Van Cliburn Recital Hall and the McDavid Studio (renamed in 2006 from McNair Rehearsal Studio). Also housed within Maddox-Muse Center are offices for Performing Arts Fort Worth, the non-profit organization that oversees management of the Hall, and the Fort Worth Symphony Orchestra.

McDavid Studio in the Maddox-Muse Center is gaining a strong reputation as a performance venue in its own right. The space can seat as many as 220 in cabaret style.