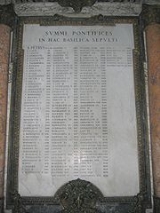 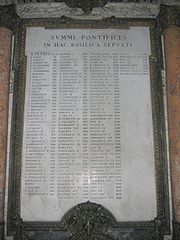 The list of popes chronologically lists the men who have been given the title Pope
Pope
The Pope is the Bishop of Rome, a position that makes him the leader of the worldwide Catholic Church . In the Catholic Church, the Pope is regarded as the successor of Saint Peter, the Apostle...
(or Bishop of Rome
Diocese of Rome
The Diocese of Rome is a diocese of the Catholic Church in Rome, Italy. The bishop of Rome is the Pope, who is the Supreme Pontiff and leader of the Catholic Church...
) by the Catholic Church. The Annuario Pontificio
Annuario Pontificio
The Annuario Pontificio is the annual directory of the Holy See. It lists all the popes to date and all officials of the Holy See's departments...
, published every year by the Vatican
Roman Curia
The Roman Curia is the administrative apparatus of the Holy See and the central governing body of the entire Catholic Church, together with the Pope...
, contains a list that is generally considered to be the most authoritative. The Annuario Pontificio lists Benedict XVI as the 265th Bishop of Rome. That list is the one given here; it lists 263 men serving 265 pontificates (periods of Papal office), if Pope-elect Stephen
Pope-elect Stephen
Stephen was a priest of Rome elected Pope in March of 752 to succeed Pope Zachary; he died of stroke a few days later, before being ordained a bishop...
is excluded (see below). The difference in these numbers is because Benedict IX reigned during three non-consecutive periods between 1032 and 1048.

The term pope (Latin
Latin
Latin is an Italic language originally spoken in Latium and Ancient Rome. It, along with most European languages, is a descendant of the ancient Proto-Indo-European language. Although it is considered a dead language, a number of scholars and members of the Christian clergy speak it fluently, and...
: papa "father") is used in several Churches to denote their high spiritual leaders (for example Coptic Pope). This title in English usage usually refers to the head of the Roman Catholic Church. The Roman Catholic pope uses various titles by tradition, including Papa
Papa
Papa or PAPA may refer to:*P, in the ICAO spelling alphabet*Papa class submarine*Pāpa, in Hinduism, the Sanskrit word for the concept of sin* Papa is a word used in many languages as an affectionate term for fatherPeople:...
, Summus Pontifex, Pontifex Maximus
Pontifex Maximus
The Pontifex Maximus was the high priest of the College of Pontiffs in ancient Rome. This was the most important position in the ancient Roman religion, open only to patricians until 254 BC, when a plebeian first occupied this post...
, and Servus servorum Dei
Servus Servorum Dei
Servus Servorum Dei is a Latin phrase meaning Servant of the Servants of God. The phrase is one of the titles of the Pope and is used to refer to the Pope in the beginning address of Papal bulls.-History:...
. Each title has been added by unique historical events and unlike other papal prerogatives, is not incapable of modification.

Hermannus Contractus
Hermannus Contractus
Hermann of Reichenau , also called Hermannus Contractus or Hermannus Augiensis or Herman the Cripple, was an 11th century scholar, composer, music theorist, mathematician, and astronomer. He composed the Marian prayer Alma Redemptoris Mater...
may have been the first historian to number the popes continuously. His list ends in 1049 with Pope Leo IX
Pope Leo IX
Pope Saint Leo IX , born Bruno of Eguisheim-Dagsburg, was Pope from February 12, 1049 to his death. He was a German aristocrat and as well as being Pope was a powerful secular ruler of central Italy. He is regarded as a saint by the Roman Catholic Church, with the feast day of April 19...
as number 154. Several changes were made to the list during the 20th century. Antipope Christopher
Antipope Christopher
Christopher held the papacy from October 903 to January 904. Although he was listed as a legitimate Pope in most modern lists of Popes until the first half of the 20th century, the apparently uncanonical method by which he obtained the papacy led to his being removed from the quasi-official roster...
was considered legitimate for a long time. Pope-elect Stephen was considered legitimate under the name Stephen II until the 1961 edition, when his name was erased. Although these changes are no longer controversial, a number of modern lists still include this "first Pope Stephen II". It is probable that this is because they are based on the 1913 edition of the Catholic Encyclopedia
Catholic Encyclopedia
The Catholic Encyclopedia, also referred to as the Old Catholic Encyclopedia and the Original Catholic Encyclopedia, is an English-language encyclopedia published in the United States. The first volume appeared in March 1907 and the last three volumes appeared in 1912, followed by a master index...
, which is in the public domain. In the year 2001 a rigorous study was made by the Catholic Church into the history of the papacy
History of the Papacy
The history of the papacy, the office held by the Pope as head of the Catholic Church, spans from the time of Saint Peter to present day.During the Early Church, the bishops of Rome enjoyed no temporal power until the time of Constantine...
which "prompted almost 200 corrections to the existing biographies of the popes, from St Peter to John Paul II."

|St Linus
Pope Linus
Pope Saint Linus was, according to several early sources, Bishop of the diocese of Rome after Saint Peter. This makes Linus the second Pope. According to other early sources Pope Clement I was the Pope after Peter...

LINUS
|Linus
|Tuscia
Tuscany
Tuscany is a region in Italy. It has an area of about 23,000 square kilometres and a population of about 3.75 million inhabitants. The regional capital is Florence ....
(Central Tuscany)
| Feast day 23 September. Also revered as a saint in Eastern Christianity
Eastern Christianity
Eastern Christianity comprises the Christian traditions and churches that developed in the Balkans, Eastern Europe, Asia Minor, the Middle East, Northeastern Africa, India and parts of the Far East over several centuries of religious antiquity. The term is generally used in Western Christianity to...
, with a feast day of 7 June.
|- valign="top"
|3
|76/79(?) – 88/92
| 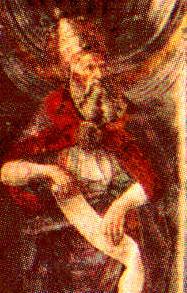 (Cletus)
ANACLETUS
|Anacletus
|Probably Greece
Greece
Greece , officially the Hellenic Republic , and historically Hellas or the Republic of Greece in English, is a country in southeastern Europe....

|Martyred; feast day 26 April. Once erroneously split into Cletus and Anacletus
|- valign="top"
|4
|88/92 – 97
|
|St Clement I
Pope Clement I
Starting in the 3rd and 4th century, tradition has identified him as the Clement that Paul mentioned in Philippians as a fellow laborer in Christ.While in the mid-19th century it was customary to identify him as a freedman of Titus Flavius Clemens, who was consul with his cousin, the Emperor...

CLEMENS
|Clement
|Rome
Rome
Rome is the capital of Italy and the country's largest and most populated city and comune, with over 2.7 million residents in . The city is located in the central-western portion of the Italian Peninsula, on the Tiber River within the Lazio region of Italy.Rome's history spans two and a half... 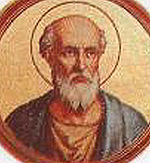 (Aristus)
EVARISTUS
|Aristus
|Bethlehem
Bethlehem
Bethlehem is a Palestinian city in the central West Bank of the Jordan River, near Israel and approximately south of Jerusalem, with a population of about 30,000 people. It is the capital of the Bethlehem Governorate of the Palestinian National Authority and a hub of Palestinian culture and tourism...
, Judea
Judea
Judea or Judæa was the name of the mountainous southern part of the historic Land of Israel from the 8th century BCE to the 2nd century CE, when Roman Judea was renamed Syria Palaestina following the Jewish Bar Kokhba revolt.-Etymology:The...

This pope resigned his office. The exact birth date of Innocent VIII and almost all popes prior to Eugene IV is unknown, therefore the lowest probable age has been assumed for this table.

33 popes have been members of religious orders. These have included: