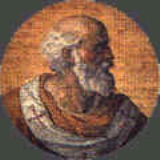 Encyclopedia
Pope Boniface V was pope
Pope
The Pope is the Bishop of Rome, a position that makes him the leader of the worldwide Catholic Church . In the Catholic Church, the Pope is regarded as the successor of Saint Peter, the Apostle...
from 619 to 625.

He was consecrated as pope on December 23, 619. He did much for the Christianising
Religious conversion
Religious conversion is the adoption of a new religion that differs from the convert's previous religion. Changing from one denomination to another within the same religion is usually described as reaffiliation rather than conversion.People convert to a different religion for various reasons,...
of England
England
England is a country that is part of the United Kingdom. It shares land borders with Scotland to the north and Wales to the west; the Irish Sea is to the north west, the Celtic Sea to the south west, with the North Sea to the east and the English Channel to the south separating it from continental...
and enacted the decree by which churches became places of refuge for criminals.

Boniface V was a Neapolitan
Naples
Naples is a city in Southern Italy, situated on the country's west coast by the Gulf of Naples. Lying between two notable volcanic regions, Mount Vesuvius and the Phlegraean Fields, it is the capital of the region of Campania and of the province of Naples...
who succeeded Pope Adeodatus I
Pope Adeodatus I
Pope Saint Adeodatus I or Deodatus I was Pope from November 13, 615 to his death....
after a vacancy of more than a year. Before his consecration, Italy was disturbed by the rebellion of the eunuch Eleutherius
Eleutherius (exarch)
Eleutherius was Exarch of Ravenna . A eunuch, he succeeded John I Lemigius as exarch.Early in his reign, nearly the entire exarchate was unstable. In Ravenna, there was obvious discontent with the Byzantines; in Naples, a certain John of Conza, separated the city from the exarch's control...
, Exarch of Ravenna
Exarchate of Ravenna
The Exarchate of Ravenna or of Italy was a centre of Byzantine power in Italy, from the end of the 6th century to 751, when the last exarch was put to death by the Lombards.-Introduction:...
. The patrician pretender advanced towards Rome, but before he could reach the city, he was slain by his own troops.

The Liber Pontificalis
Liber Pontificalis
The Liber Pontificalis is a book of biographies of popes from Saint Peter until the 15th century. The original publication of the Liber Pontificalis stopped with Pope Adrian II or Pope Stephen V , but it was later supplemented in a different style until Pope Eugene IV and then Pope Pius II...
records that Boniface made certain enactments relative to the rights of sanctuary
Sanctuary
A sanctuary is any place of safety. They may be categorized into human and non-human .- Religious sanctuary :A religious sanctuary can be a sacred place , or a consecrated area of a church or temple around its tabernacle or altar.- Sanctuary as a sacred place :#Sanctuary as a sacred place:#:In...
, and that he ordered the ecclesiastical notaries
Notary public
A notary public in the common law world is a public officer constituted by law to serve the public in non-contentious matters usually concerned with estates, deeds, powers-of-attorney, and foreign and international business...
to obey the laws of the empire on the subject of wills
Will (law)
A will or testament is a legal declaration by which a person, the testator, names one or more persons to manage his/her estate and provides for the transfer of his/her property at death...
. He also prescribed that acolyte
Acolyte
In many Christian denominations, an acolyte is anyone who performs ceremonial duties such as lighting altar candles. In other Christian Churches, the term is more specifically used for one who wishes to attain clergyhood.-Etymology:...
s should not presume to translate the relics of martyrs and that, in the Basilica di San Giovanni in Laterano, they should not take the place of deacon
Deacon
Deacon is a ministry in the Christian Church that is generally associated with service of some kind, but which varies among theological and denominational traditions...
s in administering baptism
Baptism
In Christianity, baptism is for the majority the rite of admission , almost invariably with the use of water, into the Christian Church generally and also membership of a particular church tradition...
. Boniface completed and consecrated the cemetery of Saint Nicomedes
Saint Nicomedes
Saint Nicomedes was a Martyr of unknown era, whose feast is observed 15 September.The Roman Martyrologium and the historical Martyrologies of Bede and his imitators place the feast on this date. The Gregorian Sacramentary contains under the same date the orations for his Mass...
on the Via Nomentana
Via Nomentana
Via Nomentana is an ancient road of Italy, leading North-East from Rome to Nomentum , a distance of . It originally bore the name Via Ficulnensis, from the old Latin village of Ficulnea, about from Rome. It was subsequently prolonged to Nomentum, but never became an important high road, and merged...
. In the Liber Pontificalis, Boniface is described as "the mildest of men", whose chief distinction was his great love for the clergy.

The Venerable Bede
Bede
Bede , also referred to as Saint Bede or the Venerable Bede , was a monk at the Northumbrian monastery of Saint Peter at Monkwearmouth, today part of Sunderland, England, and of its companion monastery, Saint Paul's, in modern Jarrow , both in the Kingdom of Northumbria...
writes of the pope's affectionate concern for the English Church. The "letters of exhortation" which he is said to have addressed to Mellitus
Mellitus
Mellitus was the first Bishop of London in the Saxon period, the third Archbishop of Canterbury, and a member of the Gregorian mission sent to England to convert the Anglo-Saxons from their native paganism to Christianity. He arrived in 601 AD with a group of clergymen sent to augment the mission,...
, Archbishop of Canterbury
Archbishop of Canterbury
The Archbishop of Canterbury is the senior bishop and principal leader of the Church of England, the symbolic head of the worldwide Anglican Communion, and the diocesan bishop of the Diocese of Canterbury. In his role as head of the Anglican Communion, the archbishop leads the third largest group...
, and to Justus
Justus
Justus was the fourth Archbishop of Canterbury. He was sent from Italy to England by Pope Gregory the Great, on a mission to Christianize the Anglo-Saxons from their native Anglo-Saxon paganism, probably arriving with the second group of missionaries despatched in 601...
, Bishop of Rochester
Bishop of Rochester
The Bishop of Rochester is the ordinary of the Church of England Diocese of Rochester in the Province of Canterbury.The diocese covers the west of the county of Kent and is centred in the city of Rochester where the bishop's seat is located at the Cathedral Church of Christ and the Blessed Virgin...
, are no longer extant, but certain other letters of his have been preserved. One is written to Justus, after he had succeeded Mellitus as Archbishop of Canterbury in 624, conferring the pallium
Pallium
The pallium is an ecclesiastical vestment in the Roman Catholic Church, originally peculiar to the Pope, but for many centuries bestowed by him on metropolitans and primates as a symbol of the jurisdiction delegated to them by the Holy See. In that context it has always remained unambiguously...
upon him and directing him to "ordain bishops as occasion should require." According to Bede, Pope Boniface also sent letters to Edwin
Edwin of Northumbria
Edwin , also known as Eadwine or Æduini, was the King of Deira and Bernicia – which later became known as Northumbria – from about 616 until his death. He converted to Christianity and was baptised in 627; after he fell at the Battle of Hatfield Chase, he was venerated as a saint.Edwin was the son...
, King of Northumbria (625), urging him to embrace the Christian faith; and to the Christian Princess Æthelburg of Kent, Edwin's spouse, exhorting her to use her best endeavours for the conversion of her consort (Bede, H.E.
Historia ecclesiastica gentis Anglorum
The Historia ecclesiastica gentis Anglorum is a work in Latin by Bede on the history of the Christian Churches in England, and of England generally; its main focus is on the conflict between Roman and Celtic Christianity.It is considered to be one of the most important original references on...
, II, vii, viii, x, xi).