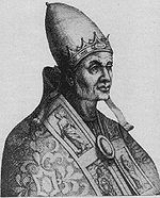 Encyclopedia
Pope Benedict VIII born Theophylactus, Pope
Pope
The Pope is the Bishop of Rome, a position that makes him the leader of the worldwide Catholic Church . In the Catholic Church, the Pope is regarded as the successor of Saint Peter, the Apostle...
from 1012 to 1024, of the noble family of the counts of Tusculum
Counts of Tusculum
The counts of Tusculum were the most powerful secular noblemen in Latium, near Rome, in the present-day Italy between the 10th and 12th centuries. Several popes and an antipope during the 11th century came from their ranks. They created and perfected the political formula of noble-papacy, wherein...
(son of Gregory, Count of Tusculum, and Maria, and brother of future Pope John XIX
Pope John XIX
Pope John XIX , born Romanus, was Pope from 1024 to 1032.He succeeded his brother, Pope Benedict VIII , both being members of the powerful house of Tusculum...
), descended from Theophylact, Count of Tusculum like his predecessor Pope Benedict VI
Pope Benedict VI
Pope Benedict VI was pope from January 19, 973 to June 974.He was born in Rome as the son of Hildebrand and was chosen with great ceremony and installed as pope under the protection of the Emperor Otto I on January 19, 973. During his pontificate, Benedict VI confirmed the privileges of some of...
(973–974).

In 1020, Benedict VIII travelled to Germany to confer with Henry II about the renewed Byzantine
Byzantine Empire
The Byzantine Empire was the Eastern Roman Empire during the periods of Late Antiquity and the Middle Ages, centred on the capital of Constantinople. Known simply as the Roman Empire or Romania to its inhabitants and neighbours, the Empire was the direct continuation of the Ancient Roman State...
menace in the Mezzogiorno
Mezzogiorno
The Midday is a wide definition, without any administrative usage, used to indicate the southern half of the Italian state, encompassing the southern section of the continental Italian Peninsula and the two major islands of Sicily and Sardinia, in addition to a large number of minor islands...
. Arriving at Bamberg
Bamberg
Bamberg is a city in Bavaria, Germany. It is located in Upper Franconia on the river Regnitz, close to its confluence with the river Main. Bamberg is one of the few cities in Germany that was not destroyed by World War II bombings because of a nearby Artillery Factory that prevented planes from...
at Eastertide, he consecrated the new cathedral there, obtained a charter from Henry II confirming the donations of Charlemagne
Charlemagne
Charlemagne was King of the Franks from 768 and Emperor of the Romans from 800 to his death in 814. He expanded the Frankish kingdom into an empire that incorporated much of Western and Central Europe. During his reign, he conquered Italy and was crowned by Pope Leo III on 25 December 800...
(768–814) and Otto the Great (936–973), and visited the monastery of Fulda
Fulda
Fulda is a city in Hesse, Germany; it is located on the river Fulda and is the administrative seat of the Fulda district .- Early Middle Ages :...
. He convinced the Emperor to lead an expedition into the south of Italy and subordinate his vassals who had defected to Greek authority.
The source of this article is wikipedia, the free encyclopedia.  The text of this article is licensed under the GFDL.