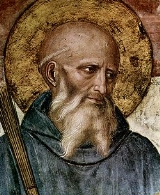 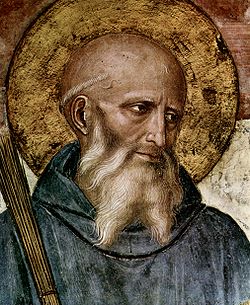 Benedictine refers to the spirituality
Spirituality
Spirituality can refer to an ultimate or an alleged immaterial reality; an inner path enabling a person to discover the essence of his/her being; or the “deepest values and meanings by which people live.” Spiritual practices, including meditation, prayer and contemplation, are intended to develop...
and consecrated life
Consecrated life
The consecrated life in the Christian tradition, especially the Roman Catholic Church, but also the Anglican Church and to some extent other Christian denominations, is, as the Roman Catholic Code of Canon Law states: "a stable form of living by which faithful, following Christ more closely under...
in accordance with the Rule of St Benedict
Rule of St Benedict
The Rule of Saint Benedict is a book of precepts written by St. Benedict of Nursia for monks living communally under the authority of an abbot. Since about the 7th century it has also been adopted by communities of women...
, written by Benedict of Nursia
Benedict of Nursia
Saint Benedict of Nursia is a Christian saint, honored by the Roman Catholic Church as the patron saint of Europe and students.Benedict founded twelve communities for monks at Subiaco, about to the east of Rome, before moving to Monte Cassino in the mountains of southern Italy. There is no...
in the sixth century for the cenobitic
Cenobitic
Cenobitic monasticism is a monastic tradition that stresses community life. Often in the West, the community belongs to a religious order and the life of the cenobitic monk is regulated by a religious rule, a collection of precepts...
communities he founded in central Italy
Italy
Italy , officially the Italian Republic languages]] under the European Charter for Regional or Minority Languages. In each of these, Italy's official name is as follows:;;;;;;;;), is a unitary parliamentary republic in South-Central Europe. To the north it borders France, Switzerland, Austria and...
. The most notable of these is Monte Cassino
Monte Cassino
Monte Cassino is a rocky hill about southeast of Rome, Italy, c. to the west of the town of Cassino and altitude. St. Benedict of Nursia established his first monastery, the source of the Benedictine Order, here around 529. It was the site of Battle of Monte Cassino in 1944...
, the first monastery founded by Benedict around 529.

Used as a noun, the term Benedictine denotes membership in the order. By extension it is sometimes applied to other adherents of the Benedictine spirituality.

In the English Reformation
English Reformation
The English Reformation was the series of events in 16th-century England by which the Church of England broke away from the authority of the Pope and the Roman Catholic Church....
all monasteries were dissolved
Dissolution of the Monasteries
The Dissolution of the Monasteries, sometimes referred to as the Suppression of the Monasteries, was the set of administrative and legal processes between 1536 and 1541 by which Henry VIII disbanded monasteries, priories, convents and friaries in England, Wales and Ireland; appropriated their...
and their lands confiscated by the Crown, forcing their Catholic members to flee into exile on the Continent, although during the 19th century they were able to return to England, including to Selby Abbey
Selby Abbey
Selby Abbey is an Anglican parish church in the town of Selby, North Yorkshire.-Background:It is one of the relatively few surviving abbey churches of the medieval period, and, although not a cathedral, is one of the biggest...
in Yorkshire
Yorkshire
Yorkshire is a historic county of northern England and the largest in the United Kingdom. Because of its great size in comparison to other English counties, functions have been increasingly undertaken over time by its subdivisions, which have also been subject to periodic reform...
, one of the few great monastic churches to survive the Dissolution. Noteworthy, too, is St. Mildred's Priory, Isle of Thanet
Isle of Thanet
The Isle of Thanet lies at the most easterly point of Kent, England. While in the past it was separated from the mainland by the nearly -wide River Wantsum, it is no longer an island ....
, Kent
Kent
Kent is a county in southeast England, and is one of the home counties. It borders East Sussex, Surrey and Greater London and has a defined boundary with Essex in the middle of the Thames Estuary. The ceremonial county boundaries of Kent include the shire county of Kent and the unitary borough of...
, built in 1027 on the site of an Abbey founded in 670 by the daughter of the first Christian King of Kent. Currently the Priory is home to a community of Benedictine nuns. Four of the most notable English Abbeys are the Basilica of St Gregory the Great at Downside, commonly known as Downside Abbey
Downside Abbey
The Basilica of St Gregory the Great at Downside, commonly known as Downside Abbey, is a Roman Catholic Benedictine monastery and the Senior House of the English Benedictine Congregation. One of its main apostolates is a school for children aged nine to eighteen...
, Ealing Abbey
Ealing Abbey
Ealing Abbey is a Roman Catholic Benedictine monastic foundation in West London, England, and part of the English Benedictine Congregation.-History:...
in Ealing, West London and St. Lawrence's in Yorkshire (Ampleforth Abbey
Ampleforth Abbey
Ampleforth Abbey is a monastery of Benedictine Monks in North Yorkshire, England, part of the English Benedictine Congregation. It claims descent from the pre-Reformation community at Westminster Abbey through the last surviving monk from Westminster Sigebert Buckley.The current Abbot is Fr...
)and Worth Abbey
Worth Abbey
The Abbey of Our Lady, Help of Christians, commonly known as Worth Abbey, is a community of Roman Catholic monks who follow the Rule of St Benedict near Turners Hill village, in West Sussex, England....
which has appeared in two BBC2 TV programmes; 'The Monastery (BBC TV series)
The Monastery (BBC TV series)
The Monastery was a documentary television series made by Tiger Aspect Productions for BBC Two which aired in the UK in May 2005. The programme follows five modern lay men as they embark on a 40 day and night introduction to Roman Catholic monastic life at Worth Abbey, West Sussex, England under...
' and 'The Big Silence' . In 1928, Prinknash Abbey
Prinknash Abbey
Prinknash Abbey is a Roman Catholic Benedictine monastery situated in the Vale of Gloucester in the Diocese of Clifton, near the village of Cranham....
was officially returned to the Benedictines after four hundred years. Henry VIII had used the site as a hunting lodge. During the next few years, Prinknash Park, so called, was used as a home, until it was returned to the order. Since the Oxford Movement
Oxford Movement
The Oxford Movement was a movement of High Church Anglicans, eventually developing into Anglo-Catholicism. The movement, whose members were often associated with the University of Oxford, argued for the reinstatement of lost Christian traditions of faith and their inclusion into Anglican liturgy...
there has also been a modest flourishing of Benedictine monasticism in the Anglican Church
Anglican Communion
The Anglican Communion is an international association of national and regional Anglican churches in full communion with the Church of England and specifically with its principal primate, the Archbishop of Canterbury...
and Protestant Churches. Anglican Benedictine Abbots are invited guests of the Benedictine Abbot Primate in Rome at Abbatial gatherings at Sant'Anselmo. There are an estimated 2,400 celibate Anglican Religious (1080 men and 1320 women) in the Anglican Communion as a whole, some of whom have adopted the Rule of St. Benedict. For a full list of all historic Benedictine houses in England & Wales see below.

In the late 19th century, laws were enacted preventing religious teaching. The original intent was to allow secular schools.
In 1880 and 1882, Benedictine teaching monks were effectively exiled; this was not completed until 1901.

Communities of the Benedictine order are governed by the 73 chapters of the Rule of St. Benedict.