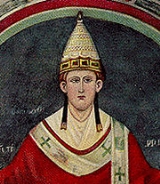 Pope Innocent III (1160 or 1161 – 16 July 1216) was Pope
Pope
The Pope is the Bishop of Rome, a position that makes him the leader of the worldwide Catholic Church . In the Catholic Church, the Pope is regarded as the successor of Saint Peter, the Apostle...
from 8 January 1198 until his death. His birth name was Lotario dei Conti di Segni, sometimes anglicised to Lothar of Segni.
Pope Innocent was one of the most powerful and influential popes in the history of the papacy, who exerted a wide influence over the Christian regimes of Europe, claiming supremacy over all of Europe's kings.

Innocent III anti-pope and pope or both