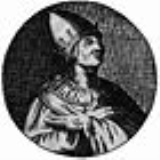 Encyclopedia
Pope John VIII was pope
Pope
The Pope is the Bishop of Rome, a position that makes him the leader of the worldwide Catholic Church . In the Catholic Church, the Pope is regarded as the successor of Saint Peter, the Apostle...
from December 13, 872 to December 16, 882. He is often considered one of the ablest pontiffs of the ninth century and the last bright spot on the papacy until Leo IX
Pope Leo IX
Pope Saint Leo IX , born Bruno of Eguisheim-Dagsburg, was Pope from February 12, 1049 to his death. He was a German aristocrat and as well as being Pope was a powerful secular ruler of central Italy. He is regarded as a saint by the Roman Catholic Church, with the feast day of April 19...
two centuries later.

He was born in Rome
Rome
Rome is the capital of Italy and the country's largest and most populated city and comune, with over 2.7 million residents in . The city is located in the central-western portion of the Italian Peninsula, on the Tiber River within the Lazio region of Italy.Rome's history spans two and a half...
. Among the reforms achieved during his pontificate was a notable administrative reorganisation of the papal curia
Roman Curia
The Roman Curia is the administrative apparatus of the Holy See and the central governing body of the entire Catholic Church, together with the Pope...
. With little help from European kings, he attempted to expel the Saracen
Saracen
Saracen was a term used by the ancient Romans to refer to a people who lived in desert areas in and around the Roman province of Arabia, and who were distinguished from Arabs. In Europe during the Middle Ages the term was expanded to include Arabs, and then all who professed the religion of Islam...
s from Italy
Italy
Italy , officially the Italian Republic languages]] under the European Charter for Regional or Minority Languages. In each of these, Italy's official name is as follows:;;;;;;;;), is a unitary parliamentary republic in South-Central Europe. To the north it borders France, Switzerland, Austria and...
after they had penetrated as far as Rome. He failed and was forced to pay tribute. John defended St. Methodius against his German enemies, who objected to his use of the Slavonic language in the liturgy
Liturgy
Liturgy is either the customary public worship done by a specific religious group, according to its particular traditions or a more precise term that distinguishes between those religious groups who believe their ritual requires the "people" to do the "work" of responding to the priest, and those...
. John later confirmed the permission to use Slavonic that had been originally granted by Pope Adrian II, John's predecessor. In 879 he recognised the reinstatement of Photius as the legitimate patriarch of Constantinople
Constantinople
Constantinople was the capital of the Roman, Eastern Roman, Byzantine, Latin, and Ottoman Empires. Throughout most of the Middle Ages, Constantinople was Europe's largest and wealthiest city.-Names:...
; Photius had been condemned in 869 by Pope Adrian II. In 878 John crowned Louis II, king of France. He also anointed two Holy Roman Emperors: Charles II and Charles III.


Pope Joan and connection to the name John VIII

According to the legend of Pope Joan
Pope Joan
Pope Joan is a legendary female Pope who, it is purported, reigned for a few years some time in the Middle Ages. The story first appeared in the writings of 13th-century chroniclers, and subsequently spread through Europe...
, a woman named Joan reigned as pope under the name of John earlier in the 9th century. Her true sex was discovered, and she would eventually be erased from the historical record because of this. If she existed, when regnal numbering was applied to papal reigns in the 10th century, she would have been designated John VIII and the Pope John that is the subject of this article would have been John IX. However, there are no contemporary references to a female pope; the legend was apparently created during the 13th century. The historical John VIII is not otherwise connected with this legend.

According to Patrick Madrid, author of Pope Fiction, a book about the legend of Pope Joan, Pope John VIII himself may have been the origin of the legend. He writes,


He appears to have had a very weak personality, even perhaps somewhat effeminate.

Cardinal Casesare Baronius, in his history Church Annals, suggests that John VIII's reputation as effeminate gave rise to the legend. Indeed, it would seem that over time, the common folk added ever more lurid embellishments until the vulgar jokes about the hapless (and certainly male) pope ballooned and metamorphosed into a female "popessa."