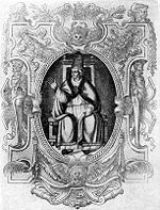 Encyclopedia
Pope Clement II was Pope
Pope
The Pope is the Bishop of Rome, a position that makes him the leader of the worldwide Catholic Church . In the Catholic Church, the Pope is regarded as the successor of Saint Peter, the Apostle...
from December 25, 1046 to his death. He was the first in a series of reform-minded popes from Germany.

Born in Hornburg
Hornburg
Hornburg is a town in the Wolfenbüttel district, in the German state of Lower Saxony. It is situated at the Ilse river, a tributary of the Oker. Hornburg is part of the Samtgemeinde Schladen and home to numerous historically valuable half-timber buildings...
, Lower Saxony
Lower Saxony
Lower Saxony is a German state situated in north-western Germany and is second in area and fourth in population among the sixteen states of Germany...
, Germany
Germany
Germany , officially the Federal Republic of Germany , is a federal parliamentary republic in Europe. The country consists of 16 states while the capital and largest city is Berlin. Germany covers an area of 357,021 km2 and has a largely temperate seasonal climate...
, he was the son of Count Konrad of Morsleben and Hornburg and his wife Amulrad.

In 1040, he became Bishop of Bamberg. In 1046, he accompanied King Henry III
Henry III, Holy Roman Emperor
Henry III , called the Black or the Pious, was a member of the Salian Dynasty of Holy Roman Emperors...
on his campaign to Italy and in December, participated in the Council of Sutri
Council of Sutri
The Council of Sutri was called by Henry III, King of the Germans and opened on December 20, 1046, in the hilltown of Sutri, at the edge of the Duchy of Rome. The Catholic Church does not list this as an ecumenical council....
, which deposed former Popes Benedict IX
Pope Benedict IX
Pope Benedict IX , born Theophylactus of Tusculum, was Pope on three occasions between 1032 and 1048. One of the youngest popes, he was the only man to have been Pope on more than one occasion and the only man ever to have sold the papacy.-Biography:Benedict was born in Rome as Theophylactus, the...
and Sylvester III and persuaded Pope Gregory VI
Pope Gregory VI
Pope Gregory VI , born John Gratian , was Pope from 1 May 1045 until his abdication at the Council of Sutri on 20 December 1046....
to resign. King Henry nominated Suidger for the Papacy and the council elected him. Suidger took the name Clement
Pope Clement
There have been fourteen popes named Clement.*Pope Clement I saint, *Pope Clement II *Pope Clement III *Pope Clement IV...
II. Immediately after his election, King Henry and the new Pope moved to Rome, where Clement crowned Henry III as Holy Roman Emperor
Holy Roman Emperor
The Holy Roman Emperor is a term used by historians to denote a medieval ruler who, as German King, had also received the title of "Emperor of the Romans" from the Pope...
.

Clement II's short pontificate, starting with the Roman synod
Synod
A synod historically is a council of a church, usually convened to decide an issue of doctrine, administration or application. In modern usage, the word often refers to the governing body of a particular church, whether its members are meeting or not...
of 1047, initiated an improvement on the state of things in the Roman Church, particularly through enacting decrees against simony
Simony
Simony is the act of paying for sacraments and consequently for holy offices or for positions in the hierarchy of a church, named after Simon Magus , who appears in the Acts of the Apostles 8:9-24...
. A dispute for precedence between the Sees of Ravenna, Milan, and Aquileia was settled in favour of Ravenna.

His election was later criticized by the reform party within the papal curia, due to the royal involvement and the fact that the new Pope was already bishop of another diocesis. Contrary to later practice, Clement kept his old see, governing both Rome and Bamberg simultaneously.

Clement accompanied the Emperor in a triumphal progress through Southern Italy and placed Benevento under an interdict for refusing to open its gates to them. Proceeding with Henry to Germany, he canonized Wiborada
Wiborada
Saint Wiborada of St. Gall was a member of the Swabian nobility in what is present-day Switzerland. She was an anchoress, Benedictine nun, and martyr, as well as the first woman formally canonized by the Vatican. Her vita was written ca...
, a nun of St. Gall, martyred by the Hungarians in 925. On his way back to Rome he died near Pesaro in October 1047. His corpse was transferred back to Bamberg
Bamberg
Bamberg is a city in Bavaria, Germany. It is located in Upper Franconia on the river Regnitz, close to its confluence with the river Main. Bamberg is one of the few cities in Germany that was not destroyed by World War II bombings because of a nearby Artillery Factory that prevented planes from...
, which he had loved dearly, and interred in the western choir of the Bamberg Cathedral
Bamberg Cathedral
The Bamberg Cathedral is a church in Bamberg, Germany, completed in the 13th century. The cathedral is under the administration of the Roman Catholic Church and is the seat of the Archbishop of Bamberg....
. His is the only tomb of a Pope north of the Alps.

A recent toxicologic examination of his remains confirmed centuries old rumors that the Pope had been poisoned with lead sugar
Lead(II) acetate
Lead acetate , also known as lead acetate, lead diacetate, plumbous acetate, sugar of lead, lead sugar, salt of Saturn, and Goulard's powder, is a white crystalline chemical compound with a sweetish taste. It is made by treating lead oxide with acetic acid. Like other lead compounds, it is toxic...
. It is, however, not clear whether he was murdered or whether the lead sugar was used as medicine.
The source of this article is wikipedia, the free encyclopedia.  The text of this article is licensed under the GFDL.