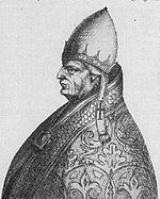 Encyclopedia
Pope Gregory VI born John Gratian (Latin Johannes Gratianus), was Pope from 1 May 1045 until his abdication at the Council of Sutri
Council of Sutri
The Council of Sutri was called by Henry III, King of the Germans and opened on December 20, 1046, in the hilltown of Sutri, at the edge of the Duchy of Rome. The Catholic Church does not list this as an ecumenical council....
on 20 December 1046.

Gratian, the Archpriest
Archpriest
An archpriest is a priest with supervisory duties over a number of parishes. The term is most often used in Eastern Orthodoxy and Eastern Catholic Churches, although it may be used in the Latin rite of the Roman Catholic Church instead of dean or vicar forane.In the 16th and 17th centuries, during...
of St. John by the Latin Gate
San Giovanni a Porta Latina
San Giovanni a Porta Latina is a Basilica church in Rome, Italy, near the Porta Latina of the Aurelian Wall...
, was a man of great reputation for uprightness of character. He was also the godfather of the boy Pope Benedict IX
Pope Benedict IX
Pope Benedict IX , born Theophylactus of Tusculum, was Pope on three occasions between 1032 and 1048. One of the youngest popes, he was the only man to have been Pope on more than one occasion and the only man ever to have sold the papacy.-Biography:Benedict was born in Rome as Theophylactus, the...
(1032–1044, 1045, 1047–1048) who was foisted by his powerful family, the Theophylacti, counts of Tusculum
Tusculum
Tusculum is a ruined Roman city in the Alban Hills, in the Latium region of Italy.-Location:Tusculum is one of the largest Roman cities in Alban Hills. The ruins of Tusculum are located on Tuscolo hill—more specifically on the northern edge of the outer crater ring of the Alban volcano...
, on the Papacy at the age of twenty.

Benedict IX, wishing to marry and vacate a position into which, though wholly unfit, he had been thrust by his family, consulted his godfather as to whether he could resign the supreme pontificate. When he was convinced that he might do so, he offered to give up the papacy into the hands of his godfather for a large sum of money. Desirous of ridding the See of Rome of such an unworthy pontiff, John Gratian paid him the money and was recognized as Pope in his stead.

The accession of Gratian, who took the name of Gregory VI, though it was hailed with joy even by such a strict upholder of the right as St. Peter Damian
Peter Damian
Saint Peter Damian, O.S.B. was a reforming monk in the circle of Pope Gregory VII and a cardinal. In 1823, he was declared a Doctor of the Church...
, did not bring peace to the Church. When Benedict IX left the city after selling the papacy, there was already another aspirant to the See of Peter in the field. John, Bishop of Sabina, had been saluted as Pope Sylvester III (1045) by that faction of the nobility which had driven Benedict IX from Rome in 1044, and had then installed him in his stead. Though Benedict IX soon returned, and forced Sylvester III to retire to his See of Sabina, that pretender never gave up his claims, and through his party contrived apparently to keep some hold on a portion of Rome.

To complicate matters, Benedict IX, unable, it seems, to obtain the bride on whom he had set his heart, soon repented of his resignation, again claimed the papacy, and in his turn is thought to have succeeded in acquiring dominion over a part of the city.

With an empty exchequer and a clergy that had largely lost the savour of righteousness, Gregory VI was confronted by an almost hopeless task. Nevertheless, with the aid of his "capellanus" or chaplain, Hildebrand, destined to be the Pope Gregory VII
Pope Gregory VII
Pope St. Gregory VII , born Hildebrand of Sovana , was Pope from April 22, 1073, until his death. One of the great reforming popes, he is perhaps best known for the part he played in the Investiture Controversy, his dispute with Henry IV, Holy Roman Emperor affirming the primacy of the papal...
(1073–85), he essayed to bring about civil and religious order. He strove to effect the latter by letters and by councils, and the former by force of arms. But the factions of his rivals were too strong to be put down by him, and the confusion only increased.

Convinced that nothing would meet the case but imperial intervention, a number of influential clergy and laity separated themselves from communion with Gregory VI or either of his two rivals and implored Emperor Henry III
Henry III, Holy Roman Emperor
Henry III , called the Black or the Pious, was a member of the Salian Dynasty of Holy Roman Emperors...
(1039–56) to cross the Alps
Alps
The Alps is one of the great mountain range systems of Europe, stretching from Austria and Slovenia in the east through Italy, Switzerland, Liechtenstein and Germany to France in the west....
and restore order. Nothing loath, Henry III descended into Italy
Italy
Italy , officially the Italian Republic languages]] under the European Charter for Regional or Minority Languages. In each of these, Italy's official name is as follows:;;;;;;;;), is a unitary parliamentary republic in South-Central Europe. To the north it borders France, Switzerland, Austria and...
in the autumn of 1046.

Strong in the conviction of his innocence, Gregory VI went north to meet him. He was received by Henry III with all the honour due to a Pope, and in accordance with the royal request, summoned a council to meet at Sutri
Sutri
Sutri is a town and comune in the province of Viterbo, about 50 km from Rome, and about 30 km south of Viterbo. It is picturesquely situated on a narrow tuff hill, surrounded by ravines, a narrow neck on the west alone connecting it with the surrounding country.thumb|220px|Entrance to the...
.

Of his rivals, Sylvester III alone presented himself at the synod, which was opened December 20, 1046. Both his claim to the papacy and that of Benedict IX were soon disposed of. Deprived of all clerical rank and considered a usurper from the beginning, Sylvester III was condemned to be confined in a monastery for the rest of his life.

Gregory VI was accused of purchasing the Papacy and freely admitted it; however, he disputed that this act, given the circumstances, constituted the crime of simony
Simony
Simony is the act of paying for sacraments and consequently for holy offices or for positions in the hierarchy of a church, named after Simon Magus , who appears in the Acts of the Apostles 8:9-24...
. However, the bishops of the synod impressed upon Gratian that this act was indeed simoniacal, and called upon him to resign. Gregory VI, seeing that little choice was left him, of his own accord then complied and laid down his office.

Gregory VI himself was taken by the Emperor to Germany in May 1047, where he died in 1048, probably at Cologne.

Gregory VI was accompanied by Hildebrand, who remained with him until his death. After about a year in Cluny, Hildebrand returned to Rome in January 1049, with the new Pope Leo IX
Pope Leo IX
Pope Saint Leo IX , born Bruno of Eguisheim-Dagsburg, was Pope from February 12, 1049 to his death. He was a German aristocrat and as well as being Pope was a powerful secular ruler of central Italy. He is regarded as a saint by the Roman Catholic Church, with the feast day of April 19...
(Bruno of Toul), successor of Popes Clement II and Damasus II (1048). And when Hildebrand himself was elected Pope in 1073, he deliberately chose for himself the title Pope Gregory VII in order to proclaim his firm and loyal belief in the legitimacy of Gratian as Pope Gregory VI.
The source of this article is wikipedia, the free encyclopedia.  The text of this article is licensed under the GFDL.