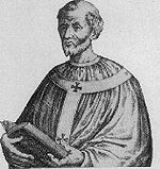 Encyclopedia
Pope Alexander IV was Pope
Pope
The Pope is the Bishop of Rome, a position that makes him the leader of the worldwide Catholic Church . In the Catholic Church, the Pope is regarded as the successor of Saint Peter, the Apostle...
from 1254 until his death.

Alexander IV succeeded Innocent IV as guardian of Conradin
Conradin
Conrad , called the Younger or the Boy, but usually known by the diminutive Conradin , was the Duke of Swabia , King of Jerusalem , and King of Sicily .-Early childhood:Conradin was born in Wolfstein, Bavaria, to Conrad...
, the last of the Hohenstaufen
Hohenstaufen
The House of Hohenstaufen was a dynasty of German kings in the High Middle Ages, lasting from 1138 to 1254. Three of these kings were also crowned Holy Roman Emperor. In 1194 the Hohenstaufens also became Kings of Sicily...
s, promising him protection; but in less than a fortnight
Fortnight
The fortnight is a unit of time equal to fourteen days, or two weeks. The word derives from the Old English fēowertyne niht, meaning "fourteen nights"....
he conspired against him and bitterly opposed Conradin's uncle Manfred
Manfred of Sicily
Manfred was the King of Sicily from 1258 to 1266. He was a natural son of the emperor Frederick II of Hohenstaufen but his mother, Bianca Lancia , is reported by Matthew of Paris to have been married to the emperor while on her deathbed.-Background:Manfred was born in Venosa...
. Alexander IV threatened excommunication
Excommunication
Excommunication is a religious censure used to deprive, suspend or limit membership in a religious community. The word means putting [someone] out of communion. In some religions, excommunication includes spiritual condemnation of the member or group...
and interdict
Interdict (Roman Catholic Church)
In Roman Catholic canon law, an interdict is an ecclesiastical censure that excludes from certain rites of the Church individuals or groups, who nonetheless do not cease to be members of the Church.-Distinctions in canon law:...
against the party of Manfred, without effect. Nor could he enlist the Kings of England
England
England is a country that is part of the United Kingdom. It shares land borders with Scotland to the north and Wales to the west; the Irish Sea is to the north west, the Celtic Sea to the south west, with the North Sea to the east and the English Channel to the south separating it from continental...
and Norway
Norway
Norway , officially the Kingdom of Norway, is a Nordic unitary constitutional monarchy whose territory comprises the western portion of the Scandinavian Peninsula, Jan Mayen, and the Arctic archipelago of Svalbard and Bouvet Island. Norway has a total area of and a population of about 4.9 million...
in a crusade against the Hohenstaufens. Rome
Rome
Rome is the capital of Italy and the country's largest and most populated city and comune, with over 2.7 million residents in . The city is located in the central-western portion of the Italian Peninsula, on the Tiber River within the Lazio region of Italy.Rome's history spans two and a half...
itself became too Ghibelline for the Pope, who withdrew to Viterbo
Viterbo
See also Viterbo, Texas and Viterbo UniversityViterbo is an ancient city and comune in the Lazio region of central Italy, the capital of the province of Viterbo. It is approximately 80 driving / 80 walking kilometers north of GRA on the Via Cassia, and it is surrounded by the Monti Cimini and...
, where he died in 1261. He was buried in Viterbo Cathedral
Duomo di Viterbo
Viterbo Cathedral is a Roman Catholic cathedral, and the principal church of the city of Viterbo, Lazio, central Italy. It is the seat of the Bishop of Viterbo and is dedicated to Saint Lawrence....
, but his tomb was destroyed during sixteenth century renovations.

His pontificate was signaled by efforts to re-unite the Eastern Orthodox churches with the Catholic Church, by the establishment of the Inquisition
Inquisition
The Inquisition, Inquisitio Haereticae Pravitatis , was the "fight against heretics" by several institutions within the justice-system of the Roman Catholic Church. It started in the 12th century, with the introduction of torture in the persecution of heresy...
in France
France
The French Republic , The French Republic , The French Republic , (commonly known as France , is a unitary semi-presidential republic in Western Europe with several overseas territories and islands located on other continents and in the Indian, Pacific, and Atlantic oceans. Metropolitan France...
, by favours shown to the mendicant orders, and by an attempt to organize a crusade against the Tatars
Tatars
Tatars are a Turkic speaking ethnic group , numbering roughly 7 million.The majority of Tatars live in the Russian Federation, with a population of around 5.5 million, about 2 million of which in the republic of Tatarstan.Significant minority populations are found in Uzbekistan, Kazakhstan,...
after the second raid against Poland
Poland
Poland , officially the Republic of Poland , is a country in Central Europe bordered by Germany to the west; the Czech Republic and Slovakia to the south; Ukraine, Belarus and Lithuania to the east; and the Baltic Sea and Kaliningrad Oblast, a Russian exclave, to the north...
in 1259.

On April 12, 1261, shortly before his death, he issued a papal bull for Henry III of England
Henry III of England
Henry III was the son and successor of John as King of England, reigning for 56 years from 1216 until his death. His contemporaries knew him as Henry of Winchester. He was the first child king in England since the reign of Æthelred the Unready...
, absolving Henry of oaths taken in the Provisions of Oxford
Provisions of Oxford
The Provisions of Oxford are often regarded as England's first written constitution ....
, which was instrumental in the Second Barons' War
Second Barons' War
The Second Barons' War was a civil war in England between the forces of a number of barons led by Simon de Montfort, against the Royalist forces led by Prince Edward , in the name of Henry III.-Causes:...
.