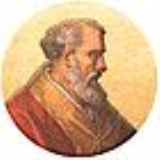 Encyclopedia
Pope John XIII of Crescenzi family (died September 6, 972) served as Pope
Pope
The Pope is the Bishop of Rome, a position that makes him the leader of the worldwide Catholic Church . In the Catholic Church, the Pope is regarded as the successor of Saint Peter, the Apostle...
from October 1, 965, until his death.

Born in Rome
Rome
Rome is the capital of Italy and the country's largest and most populated city and comune, with over 2.7 million residents in . The city is located in the central-western portion of the Italian Peninsula, on the Tiber River within the Lazio region of Italy.Rome's history spans two and a half...
, he spent his career in the papal court. He was the brother of Crescenzio II, patricius romanorum, and of Stefania, lady of Palestrina
Palestrina
Palestrina is an ancient city and comune with a population of about 18,000, in Lazio, c. 35 km east of Rome...
.

After a period as bishop of Narni
Narni
Narni is an ancient hilltown and comune of Umbria, in central Italy, with 20,100 inhabitants, according to the 2003 census. At an altitude of 240 m , it overhangs a narrow gorge of the Nera River in the province of Terni. It is very close to the Geographic center of Italy...
, he was elected Pope John XIII five months after the death of Pope Leo VIII
Pope Leo VIII
Pope Leo VIII , a Roman by birth, is considered by the Church an Antipope from 963 to 964 and a true Pope from 964 to 965. He held the lay office of protoserinus when he was elected pope by the Roman synod in December 963, when it also invalidly deposed Pope John XII , who was still alive...
(963–965), as a compromise candidate, with the agreement of Emperor Otto I (936–973). John XIII's behaviour and foreign backing made him disliked in Rome
Rome
Rome is the capital of Italy and the country's largest and most populated city and comune, with over 2.7 million residents in . The city is located in the central-western portion of the Italian Peninsula, on the Tiber River within the Lazio region of Italy.Rome's history spans two and a half...
. There was a revolt resulting in his temporary banishment occurring in December 965, though John XIII returned in November 966.

On Christmas 967, John XIII crowned Otto I's son Otto II (973–983) as co-Emperor. Otto II afterwards married the niece of the Byzantine Emperor John I Tzimisces (969–976), princess Theophanu
Theophanu
Theophanu , also spelled Theophania, Theophana or Theophano, was born in Constantinople, and was the wife of Otto II, Holy Roman Emperor.-Family:...
, as part of the ongoing attempt to reconcile Eastern and Western Churches. John XIII created new Latin archbishoprics in southern Italy, thus reducing the influence of the Byzantine Empire
Byzantine Empire
The Byzantine Empire was the Eastern Roman Empire during the periods of Late Antiquity and the Middle Ages, centred on the capital of Constantinople. Known simply as the Roman Empire or Romania to its inhabitants and neighbours, the Empire was the direct continuation of the Ancient Roman State...
and Eastern Orthodox Church
Eastern Orthodox Church
The Orthodox Church, officially called the Orthodox Catholic Church and commonly referred to as the Eastern Orthodox Church, is the second largest Christian denomination in the world, with an estimated 300 million adherents mainly in the countries of Belarus, Bulgaria, Cyprus, Georgia, Greece,...
there.