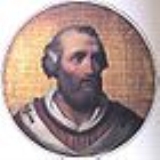 Encyclopedia
Pope John XII born Octavianus, was Pope
Pope
The Pope is the Bishop of Rome, a position that makes him the leader of the worldwide Catholic Church . In the Catholic Church, the Pope is regarded as the successor of Saint Peter, the Apostle...
from December 16, 955, to May 14, 964. The son of Alberic II, Patrician
Patricianship
Patricianship, the quality of belonging to a patriciate, began in the ancient world, where cities such as Ancient Rome had a class of patrician families whose members were the only people allowed to exercise many political functions...
of Rome (932–954), and his stepsister Alda of Vienne, he was a seventh generation descendant of Charlemagne
Charlemagne
Charlemagne was King of the Franks from 768 and Emperor of the Romans from 800 to his death in 814. He expanded the Frankish kingdom into an empire that incorporated much of Western and Central Europe. During his reign, he conquered Italy and was crowned by Pope Leo III on 25 December 800...
on his mother's side.

Before his death, Alberic administered an oath to the Roman nobles in St. Peter's, that on the next vacancy of the papal chair his only son, Octavianus, should be elected pope. He succeeded his father as Patrician of Rome in 954, at only seventeen years of age. After the death of the reigning pontiff, Agapetus II
Pope Agapetus II
Pope Agapetus II was Pope from May 10, 946 until his death in 955, at the time when Alberic II , son of Marozia, was governing the independent republic of Rome under the title of "prince and senator of the Romans."...
, Octavanius, then eighteen years of age, was actually chosen his successor on 16 December, 955. His adoption of the apostolic name of John XII was the third example of taking a regnal name
Regnal name
A regnal name, or reign name, is a formal name used by some monarchs and popes during their reigns. Since medieval times, monarchs have frequently chosen to use a name different from their own personal name when they inherit a throne....
upon elevation to the papal chair, the first being John II
Pope John II
Pope John II was pope from 533 to 535.He was the son of a certain Projectus, born in Rome and a priest of the Basilica di San Clemente on the Caelian Hill. He was made pope January 2, 533. The basilica of St. Clement still retains several memorials of "Johannes surnamed Mercurius"...
(533–535) and the second John III
Pope John III
Pope John III was pope from 561 to July 13, 574. He was born in Rome, of a distinguished family. The Liber Pontificalis calls him a son of one Anastasius. His father bore the title of illustris, more than likely being a vir illustris...
. Pope John XII was depicted as a coarse, immoral man in the writings which remain about his papacy, whose life was such that the Lateran
Lateran
Lateran and Laterano are the shared names of several architectural projects throughout Rome. The properties were once owned by the Lateranus family of the former Roman Empire...
was spoken of as a brothel
Brothel
Brothels are business establishments where patrons can engage in sexual activities with prostitutes. Brothels are known under a variety of names, including bordello, cathouse, knocking shop, whorehouse, strumpet house, sporting house, house of ill repute, house of prostitution, and bawdy house...
, and the moral corruption in Rome became the subject of general disgrace.

An account is given in Patrologia Latina
Patrologia Latina
The Patrologia Latina is an enormous collection of the writings of the Church Fathers and other ecclesiastical writers published by Jacques-Paul Migne between 1844 and 1855, with indices published between 1862 and 1865....
of the charges leveled against him:
Enemies defeated him in battle and occupied lands that belonged to the popes. In order to protect himself against the intrigues in Rome
Rome
Rome is the capital of Italy and the country's largest and most populated city and comune, with over 2.7 million residents in . The city is located in the central-western portion of the Italian Peninsula, on the Tiber River within the Lazio region of Italy.Rome's history spans two and a half...
and the power of Berengar II of Italy (950–963), John made a deal with Otto I, king of the Germans. He pledged allegiance to Otto and crowned him emperor of the Holy Roman Empire on February 2, 962. In return, Otto promised to recognize only John as pope. Ten days later, the pope and emperor ratified the Diploma Ottonianum
Diploma Ottonianum
The Ottonianum was a document co-signed during the darkest days of the Papacy by Pope John XII and Otto I, King of the Germans; it confirmed the earlier Donation of Pippin, granting control of the Papal States to the Popes, regularizing Papal elections, and clarifying the relationship between the...
, under which the emperor became the guarantor of the independence of the papal states. This was the first effective guarantee of such protection since the Carolingian Empire. After Otto left Rome and reconquered the Papal States from Berengar, however, John became fearful of the emperor's power and sent envoys to the Magyars and the Byzantine Empire
Byzantine Empire
The Byzantine Empire was the Eastern Roman Empire during the periods of Late Antiquity and the Middle Ages, centred on the capital of Constantinople. Known simply as the Roman Empire or Romania to its inhabitants and neighbours, the Empire was the direct continuation of the Ancient Roman State...
to form a league against Otto. His intrigues were discovered by Otto I, who, after defeating and imprisoning Berengar II, returned to Rome. Otto I subsequently summoned a council which deposed John XII, who was in hiding in the mountains of Campania
Campania
Campania is a region in southern Italy. The region has a population of around 5.8 million people, making it the second-most-populous region of Italy; its total area of 13,590 km² makes it the most densely populated region in the country...
, and elected Pope Leo VIII
Pope Leo VIII
Pope Leo VIII , a Roman by birth, is considered by the Church an Antipope from 963 to 964 and a true Pope from 964 to 965. He held the lay office of protoserinus when he was elected pope by the Roman synod in December 963, when it also invalidly deposed Pope John XII , who was still alive...
(963–965) in his stead.

An attempt at a revolt was made by the inhabitants of Rome even before Otto I left the city. Upon his departure, John XII returned at the head of a formidable company of friends and retainers, thus causing Leo VIII to seek safety in immediate flight. The Emperor determined to make an effort in support of Leo VIII, but before he reached the city John XII had died.

Pope Benedict V
Pope Benedict V
Pope Benedict V , Pope in 964, was elected by the Romans on the death of Pope John XII . However the Holy Roman Emperor Otto I did not approve of the choice and had him deposed after only a month and the ex-Pope was carried off to Hamburg and was placed under the care of Adaldag, Archbishop of...
(964) soon succeeded him but was successfully deposed by Leo VIII.

Onofrio Panvinio
Onofrio Panvinio
The erudite Augustinian Onofrio Panvinio or Onuphrius Panvinius was an Italian historian and antiquary, who was librarian to Cardinal Alessandro Farnese....
, in the revised edition of Bartolomeo Platina
Bartolomeo Platina
Bartolomeo Platina, originally named Sacchi was an Italian Renaissance writer.-Biography:Platina was born at Piadena , near Cremona....
's book about the popes, added an elaborate note indicating that the legend of Pope Joan
Pope Joan
Pope Joan is a legendary female Pope who, it is purported, reigned for a few years some time in the Middle Ages. The story first appeared in the writings of 13th-century chroniclers, and subsequently spread through Europe...
may be based on a mistress of John XII: Panvinius, in a note to Platina's account of pope Joan, suggests that the licentiousness of John XII, who, among his numerous mistresses, had one called Joan, who exercised the chief influence at Rome during his pontificate, may have given rise to the story of "pope Joan."