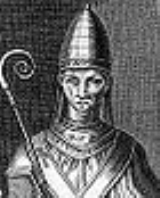 Encyclopedia
Pope John X, Pope
Pope
The Pope is the Bishop of Rome, a position that makes him the leader of the worldwide Catholic Church . In the Catholic Church, the Pope is regarded as the successor of Saint Peter, the Apostle...
from March 914 to May 928, was deacon
Deacon
Deacon is a ministry in the Christian Church that is generally associated with service of some kind, but which varies among theological and denominational traditions...
at Bologna
Bologna
Bologna is the capital city of Emilia-Romagna, in the Po Valley of Northern Italy. The city lies between the Po River and the Apennine Mountains, more specifically, between the Reno River and the Savena River. Bologna is a lively and cosmopolitan Italian college city, with spectacular history,...
when he attracted the attention of Theodora, the wife of Theophylact, Count of Tusculum, the most powerful noble in Rome
Rome
Rome is the capital of Italy and the country's largest and most populated city and comune, with over 2.7 million residents in . The city is located in the central-western portion of the Italian Peninsula, on the Tiber River within the Lazio region of Italy.Rome's history spans two and a half...
, through whose influence he was elevated first to the see of Bologna and then to the archbishopric of Ravenna
Ravenna
Ravenna is the capital city of the Province of Ravenna in the Emilia-Romagna region of Italy and the second largest comune in Italy by land area, although, at , it is little more than half the size of the largest comune, Rome...
.

In direct opposition to a decree of council, John X was, at the instigation of Theodora, promoted to the papal chair as the successor of Pope Lando
Pope Lando
Pope Lando was elected pope in either July or August 913. He died about six months later, in either February or March 914....
(913–914). Like Pope John IX
Pope John IX
-Early life:Little is known about John IX before he became Pope. Born in Tivoli in an unknown year, he was ordained as a Benedictine priest by Pope Formosus...
(898–900) he endeavoured to secure himself against his temporal enemies through a close alliance with Theophylact and Alberic
Alberic I of Spoleto
Alberic I was the Lombard duke of Spoleto from between 896 and 900 until 920, 922, or thereabouts. He first appears as a page to Guy III of Spoleto at the Battle on the Trebbia in 889 He may have later been the count of Fermo or margrave of Camerino, but whatever the case, he succeeded to Spoleto...
, marquis of Camerino
Camerino
Camerino is a small town of 7.135 inhabitants in the Marches , in the province of Macerata, Italy. It is located in the Apennines bordering Umbria, between the valleys of the rivers Potenza and Chienti, about 40 miles from Ancona....
, then governor of the duchy of Spoleto
Spoleto
Spoleto is an ancient city in the Italian province of Perugia in east central Umbria on a foothill of the Apennines. It is S. of Trevi, N. of Terni, SE of Perugia; SE of Florence; and N of Rome.-History:...
.

In December 915 John X granted the imperial crown to Berengar of Friuli (915–924), and with the assistance of the forces of all the princes of the Italian Peninsula
Italian Peninsula
The Italian Peninsula or Apennine Peninsula is one of the three large peninsulas of Southern Europe , spanning from the Po Valley in the north to the central Mediterranean Sea in the south. The peninsula's shape gives it the nickname Lo Stivale...
, he took the field in person against the Saracens, over whom he gained a great victory on the banks of the Garigliano
Battle of Garigliano
The Battle of Garigliano was fought in 915 between the forces of the Christian League and the Saracens. Pope John X personally led the Christian forces into battle.-Background:...
. The defeat and death of Berengar in 924, through the combination of the Italian princes, again frustrated the hopes of a united Italy, and after witnessing several years of anarchy and confusion, John X perished as a result of the intrigues of Marozia
Marozia
Marozia, born Maria and also known as Mariuccia or Mariozza , was a Roman noblewoman who was the alleged mistress of Pope Sergius III and was given the unprecedented titles senatrix and patricia of Rome by Pope John X.Edward Gibbon wrote of her that the "influence of two sister prostitutes,...
, daughter of Theodora.

In his letter to Tomislav, "king (rex) of the Croats
Croats
Croats are a South Slavic ethnic group mostly living in Croatia, Bosnia and Herzegovina and nearby countries. There are around 4 million Croats living inside Croatia and up to 4.5 million throughout the rest of the world. Responding to political, social and economic pressure, many Croats have...
", in which he in some detail refers to the first Church councils in Split, John X describes Michael of Zahumlje as "the most excellent leader of the Zahumlje
Zahumlje
Zachlumia or Zahumlje was a medieval principality located in modern-day regions of Herzegovina and southern Dalmatia...
" (excellentissimus dux Chulmorum).