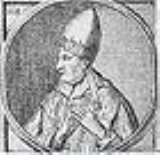 Encyclopedia
Pope Benedict IV was Pope
Pope
The Pope is the Bishop of Rome, a position that makes him the leader of the worldwide Catholic Church . In the Catholic Church, the Pope is regarded as the successor of Saint Peter, the Apostle...
from 900 to 903. He was the son of Mammalus, a native of Rome
Rome
Rome is the capital of Italy and the country's largest and most populated city and comune, with over 2.7 million residents in . The city is located in the central-western portion of the Italian Peninsula, on the Tiber River within the Lazio region of Italy.Rome's history spans two and a half...
. The tenth-century historian Frodoard, who nicknamed him the Great, commended his noble birth and public generosity. He succeeded Pope John IX
Pope John IX
-Early life:Little is known about John IX before he became Pope. Born in Tivoli in an unknown year, he was ordained as a Benedictine priest by Pope Formosus...
(898–900) and was followed by Pope Leo V
Pope Leo V
Pope Leo V, a native of Ardea, was Pope for some thirty days in 903 after the death of Pope Benedict IV . He was dethroned by antipope Christopher , who is sometimes considered a legitimate pope. Elected while a priest, Leo V's pontificate occurred in the darkest period of papal history...
(903).

Benedict IV upheld the ordinances of Pope Formosus
Pope Formosus
Pope Formosus was Pope of the Catholic Church from 891 to 896. His brief reign as Pope was troubled, and his remains were exhumed and put on trial in the notorious Cadaver Synod.-Biography:...
, whose rotting corpse had been exhumed by Pope Stephen VI
Pope Stephen VI
Pope Stephen VI was Pope from May 22, 896 to August 897.He had been made bishop of Anagni by Pope Formosus. The circumstances of his election are unclear, but he was sponsored by one of the powerful Roman families, the house of Spoleto, that contested the papacy at the time.Stephen is chiefly...
and put on trial in the Cadaver Synod
Cadaver Synod
The Cadaver Synod is the name commonly given to the posthumous ecclesiastical trial of Catholic Pope Formosus, held in the Basilica of St...
of 897. In 901, after the Carolingian
Carolingian
The Carolingian dynasty was a Frankish noble family with origins in the Arnulfing and Pippinid clans of the 7th century AD. The name "Carolingian", Medieval Latin karolingi, an altered form of an unattested Old High German *karling, kerling The Carolingian dynasty (known variously as the...
Emperors had disappeared, Benedict followed the example of Pope Leo III
Pope Leo III
Pope Saint Leo III was Pope from 795 to his death in 816. Protected by Charlemagne from his enemies in Rome, he subsequently strengthened Charlemagne's position by crowning him as Roman Emperor....
and crowned Louis of Provence as Holy Roman Emperor
Holy Roman Emperor
The Holy Roman Emperor is a term used by historians to denote a medieval ruler who, as German King, had also received the title of "Emperor of the Romans" from the Pope...
. In his reign, he also excommunicated Baldwin II of Flanders for murdering Fulk, Archbishop of Reims
Fulk, Archbishop of Reims
Fulk the Venerable was the Archbishop of Reims from 882 until his death. He was the chief opponent of the non-Carolingian king of France, Odo, in the last quarter of the 9th century...
. He died in the summer of 903 and was buried in front of St Peter's, by the gate of Guido.