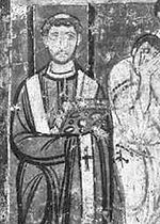 Encyclopedia
Pope Saint Leo IV was pope
Pope
The Pope is the Bishop of Rome, a position that makes him the leader of the worldwide Catholic Church . In the Catholic Church, the Pope is regarded as the successor of Saint Peter, the Apostle...
from 10 April 847 to 17 July 855.

A Roman
Rome
Rome is the capital of Italy and the country's largest and most populated city and comune, with over 2.7 million residents in . The city is located in the central-western portion of the Italian Peninsula, on the Tiber River within the Lazio region of Italy.Rome's history spans two and a half...
by birth, he was unanimously chosen to succeed Sergius II
Pope Sergius II
Pope Sergius II was Pope from January 844 – January 24, 847.On the death of Gregory IV the archdeacon John was proclaimed pope by popular acclamation, while the nobility elected Sergius, a Roman of noble birth. The opposition was suppressed, with Sergius intervening to save John's life...
. When he was elected, on 10 April 847, he was cardinal of Santi Quattro Coronati
Santi Quattro Coronati
Santi Quattro Coronati is an ancient basilica in Rome, Italy. The church dates back to the 4th century, and is devoted to four anonymous saints and martyrs. The complex of the basilica with its two courtyards, the fortified Cardinal Palace with the St...
, and had been subdeacon of Gregory IV
Pope Gregory IV
Pope Gregory IV was chosen to succeed Valentine in December 827, on which occasion he recognized the supremacy of the Frankish emperor Louis the Pious in the most unequivocal manner....
and archpriest under his predecessor. His pontificate was chiefly distinguished by his efforts to repair the damage done by the Saracens during the reign of his predecessor to various churches of the city, especially those of St Peter
St. Peter's Basilica
The Papal Basilica of Saint Peter , officially known in Italian as ' and commonly known as Saint Peter's Basilica, is a Late Renaissance church located within the Vatican City. Saint Peter's Basilica has the largest interior of any Christian church in the world...
and St Paul
Basilica of Saint Paul Outside the Walls
The Papal Basilica of St Paul Outside the Walls , commonly known as St Paul's Outside the Walls, is one of four churches that are the great ancient major basilicas or papal basilicas of Rome: the basilicas of St. John Lateran, St. Mary Major, and St. Peter's and Saint Paul Outside the Walls...
. 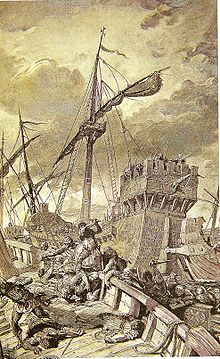 The Saracens were besieging Gaeta
Gaeta
Gaeta is a city and comune in the province of Latina, in Lazio, central Italy. Set on a promontory stretching towards the Gulf of Gaeta, it is 120 km from Rome and 80 km from Naples....
which led to Leo's ordering that the walls of the city be restored and strengthened between 848 and 849. When the Muslims approached Portus
Portus
Porto or Portus was a town in Lazio or Latium, just south of Rome, Italy. It was an ancient harbour on the right bank of the mouth of the Tiber.-Claudian phase:Rome's original harbour was Ostia...
, he summoned the Repubbliche Marinare
Repubbliche Marinare
The maritime republics were a number of city-states which flourished in Italy in the Middle Ages. The best known are the Amalfi, Pisa, Genoa and Venice. These states competed with each other both militarily and commercially...
or mariner cities of Italy: Naples
Naples
Naples is a city in Southern Italy, situated on the country's west coast by the Gulf of Naples. Lying between two notable volcanic regions, Mount Vesuvius and the Phlegraean Fields, it is the capital of the region of Campania and of the province of Naples...
, Gaeta
Gaeta
Gaeta is a city and comune in the province of Latina, in Lazio, central Italy. Set on a promontory stretching towards the Gulf of Gaeta, it is 120 km from Rome and 80 km from Naples....
and Amalfi
Amalfi
Amalfi is a town and comune in the province of Salerno, in the region of Campania, Italy, on the Gulf of Salerno, c. 35 km southeast of Naples. It lies at the mouth of a deep ravine, at the foot of Monte Cerreto , surrounded by dramatic cliffs and coastal scenery...
to form a league. The command of the unified fleet was given to Cesarius
Caesar of Naples
Caesar the Brave was the admiral of the fleet of the Duchy of Naples during the reigns of his father, Sergius I, and brother, Gregory III....
, son of Duke Sergius I of Naples
Sergius I of Naples
Sergius I was the first duke of Naples of his dynasty, often dubbed the "Sergi," which ruled over Naples for almost three centuries from his accession in 840 until the death of his namesake Sergius VII in 1137....
. The subsequent Battle of Ostia
Battle of Ostia
The naval Battle of Ostia took place in 849 between some Saracen pirates and an Italian league of Papal, Neapolitan, Amalfitan and Gaetan ships. The battled ended in favor of the Italian league, as they successfully beat off the pirates...
was one of the most famous in Middle Ages Papacy history, and is celebrated in a famous fresco
Fresco
Fresco is any of several related mural painting types, executed on plaster on walls or ceilings. The word fresco comes from the Greek word affresca which derives from the Latin word for "fresh". Frescoes first developed in the ancient world and continued to be popular through the Renaissance...
by Raphael
Raphael
Raffaello Sanzio da Urbino , better known simply as Raphael, was an Italian painter and architect of the High Renaissance. His work is admired for its clarity of form and ease of composition and for its visual achievement of the Neoplatonic ideal of human grandeur...
and his pupils in his Rooms
Raphael Rooms
The four Stanze di Raffaello in the Palace of the Vatican form a suite of reception rooms, the public part of the papal apartments. They are famous for their frescoes, painted by Raphael and his workshop...
of the Vatican Palace in the Vatican City
Vatican City
Vatican City , or Vatican City State, in Italian officially Stato della Città del Vaticano , which translates literally as State of the City of the Vatican, is a landlocked sovereign city-state whose territory consists of a walled enclave within the city of Rome, Italy. It has an area of...
. Another episode of Leo's life celebrated by the Urbinate
Urbino
Urbino is a walled city in the Marche region of Italy, south-west of Pesaro, a World Heritage Site notable for a remarkable historical legacy of independent Renaissance culture, especially under the patronage of Federico da Montefeltro, duke of Urbino from 1444 to 1482...
in his series of frescoes for the Incendio di Borgo which depicts the burning of the Anglo-Saxon district of Rome (the "Borgo
Borgo (rione of Rome)
Borgo , is the 14th historic district of Rome, Italy. It lies on the west bank of the Tiber, and has a trapezoidal shape. Its coat of arms shows a lion , lying in front of three mounts and a star...
") that, according to the legend, was stopped by Leo simply making the sign of the cross.

In order to definitively counter the Saracen menace, Leo ordered a new line of walls encompassing the suburb on the right bank of the Tiber
Tiber
The Tiber is the third-longest river in Italy, rising in the Apennine Mountains in Emilia-Romagna and flowing through Umbria and Lazio to the Tyrrhenian Sea. It drains a basin estimated at...
to be built, including the until now undefended St. Peter's Basilica
St. Peter's Basilica
The Papal Basilica of Saint Peter , officially known in Italian as ' and commonly known as Saint Peter's Basilica, is a Late Renaissance church located within the Vatican City. Saint Peter's Basilica has the largest interior of any Christian church in the world...
. The district enclosed by the walls is still known as the Civitas Leonina
Leonine City
The Leonine City is that part of the city of Rome around which the ninth-century Pope Leo IV commissioned the construction of the Leonine Wall. It is on the opposite side of the Tiber from the seven hills of Rome and was not enclosed within the ancient city's Aurelian Walls, built between 271 and...
(City of Leo). He also restored and embellished the damaged churches of St. Paul and St. Peter's: the latter's altar received again (after the former had been stolen) his gold covering, which weighed 206 lb. and was studded with precious gems.

Leo held three synod
Synod
A synod historically is a council of a church, usually convened to decide an issue of doctrine, administration or application. In modern usage, the word often refers to the governing body of a particular church, whether its members are meeting or not...
s, one of them in 850 which was distinguished by the presence of Louis II
Louis II, Holy Roman Emperor
Louis II the Younger was the King of Italy and Roman Emperor from 844, co-ruling with his father Lothair I until 855, after which he ruled alone. Louis's usual title was imperator augustus , but he used imperator Romanorum after his conquest of Bari in 871, which led to poor relations with Byzantium...
, but the other two were of little importance. The history of the papal struggle with Hincmar of Reims, which began during Leo's pontificate, belongs rather to that of Nicholas I
Pope Nicholas I
Pope Nicholas I, , or Saint Nicholas the Great, reigned from April 24, 858 until his death. He is remembered as a consolidator of papal authority and power, exerting decisive influence upon the historical development of the papacy and its position among the Christian nations of Western Europe.He...
.

Leo died on 17 July 855 and was buried in St. Peter's. Benedict III
Pope Benedict III
Pope Benedict III was Pope from September 29, 855 to April 17, 858.Little is known of Benedict's life before his papacy. He was educated and lived in Rome and was cardinal priest of S. Callisto at the time of his election. Benedict had a reputation for learning and piety. He was elected upon the...
was Leo's immediate successor. A medieval tradition claimed that a woman, Pope Joan
Pope Joan
Pope Joan is a legendary female Pope who, it is purported, reigned for a few years some time in the Middle Ages. The story first appeared in the writings of 13th-century chroniclers, and subsequently spread through Europe...
, succeeded him, disguising herself as a man; Joan is generally believed to be fictitious.

Leo was originally buried in his own monument however some years after his death, his remains were put into a tomb that contained the first four Pope Leos. In the 18th century Leo the Great's relics were separated from the other Leos and given his own chapel.