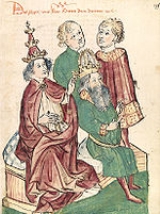 Encyclopedia
Pope Gregory V, né Bruno of Carinthia (c. 972 – February 18, 999), Pope
Pope
The Pope is the Bishop of Rome, a position that makes him the leader of the worldwide Catholic Church . In the Catholic Church, the Pope is regarded as the successor of Saint Peter, the Apostle...
from May 3, 996 to February 18, 999, son of the Salian Otto I, Duke of Carinthia
Otto I, Duke of Carinthia
Otto , called Otto of Worms, was Duke of Carinthia and Margrave of Verona from 978 to 985 and again from 1002 until his death....
, who was a grandson of the Emperor Otto I the Great (936–973). Gregory V succeeded Pope John XV
Pope John XV
Pope John XV , Pope from 985 to 996, succeeding Boniface VII . He was said to have been Pope after another Pope John that reigned four months after Pope John XIV and was named "Papa Ioannes XIV Bis" or "Pope John XIVb"...
(985–996), when only twenty-four years of age. He was the chaplain of his cousin, Emperor Otto III (983–1002), who presented him as candidate.

Politically. Gregory V acted consistently as the Emperor's representative in Rome and granted many exceptional privileges to monasteries within the Holy Roman Empire
Holy Roman Empire
The Holy Roman Empire was a realm that existed from 962 to 1806 in Central Europe.It was ruled by the Holy Roman Emperor. Its character changed during the Middle Ages and the Early Modern period, when the power of the emperor gradually weakened in favour of the princes...
. One of his first acts was to crown Otto III Emperor on 21 May 996. Together, they held a synod a few days after Otto III's coronation, in which Arnulf
Arnulf, Archbishop of Reims
Arnulf was archbishop of Reims and the illegitimate son of King Lothair of France.Archbishop Adalberon wanted Gerbert of Aurillac to succeed him, but King Hugh Capet accepted the elected Arnulf, a Carolingian, in March 989. In September of that year, Arnulf supported an attempt to place his uncle...
was ordered to be restored to the See of Reims, and Gerbert, the future Pope Silvester II
Pope Silvester II
Pope Sylvester II , born Gerbert d'Aurillac, was a prolific scholar, teacher, and Pope. He endorsed and promoted study of Arab/Greco-Roman arithmetic, mathematics, and astronomy, reintroducing to Europe the abacus and armillary sphere, which had been lost to Europe since the end of the Greco-Roman...
(999–1003), was condemned as an intruder. Robert II of France
Robert II of France
Robert II , called the Pious or the Wise , was King of France from 996 until his death. The second reigning member of the House of Capet, he was born in Orléans to Hugh Capet and Adelaide of Aquitaine....
(996–1031), who had been insisting on his right to appoint bishops, was ultimately forced to back down, and ultimately also to put aside his wife Bertha, by the rigorous enforcement of a sentence of excommunication on the kingdom.

Until the council of Pavia
Pavia
Pavia , the ancient Ticinum, is a town and comune of south-western Lombardy, northern Italy, 35 km south of Milan on the lower Ticino river near its confluence with the Po. It is the capital of the province of Pavia. It has a population of c. 71,000...
(997), Gregory V had a rival in the person of the antipope John XVI
Antipope John XVI
John XVI , born , , was an antipope from 997 to 998.-Life:He was born of Greek descent and was a native of Rossano in Calabria, southern Italy. At the time the region was a territory of the Byzantine Empire and John was the chaplain of Theophanu, the Empress consort of Emperor Otto II , who had...
(997–998), whom Crescentius II and the nobles of Rome had chosen, in revolt against the will of the youthful Emperor Otto III, the Pope's cousin. The revolt of Crescentius II was decisively suppressed by the Emperor, who marched upon Rome. John XVI fled, and Crescentius II shut himself up in the Castel Sant'Angelo
Castel Sant'Angelo
The Mausoleum of Hadrian, usually known as the Castel Sant'Angelo, is a towering cylindrical building in Parco Adriano, Rome, Italy. It was initially commissioned by the Roman Emperor Hadrian as a mausoleum for himself and his family...
. The Emperor's troops pursued the antipope, captured him, cut off his nose and ears, cut out his tongue, blinded him, and publicly degraded him before Otto III and Gregory V. He was sent to the monastery of Fulda
Fulda
Fulda is a city in Hesse, Germany; it is located on the river Fulda and is the administrative seat of the Fulda district .- Early Middle Ages :...
, in Germany, where he lived until 1013. The Castel Sant'Angelo was besieged, and when it was taken, Crescentius II was hanged upon its walls (998).

Gregory V died suddenly, and not without suspicion of foul play, on February 18, 999. He is buried in St. Peter's Basilica
St. Peter's Basilica
The Papal Basilica of Saint Peter , officially known in Italian as ' and commonly known as Saint Peter's Basilica, is a Late Renaissance church located within the Vatican City. Saint Peter's Basilica has the largest interior of any Christian church in the world...
near Pope Pelagius I
Pope Pelagius I
Pope Pelagius I was Pope from 556 to March 4, 561. He was the second pope of the Byzantine Papacy, like his predecessor a former apocrisiarius to Constantinople.-Early life:He came from a Roman noble family...
. His successor was Gerbert, who took the name of Silvester II.
The source of this article is wikipedia, the free encyclopedia.  The text of this article is licensed under the GFDL.