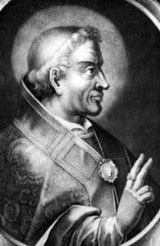 Encyclopedia
Pope Saint Agapetus I (died April 22, 536) reigned as pope
Pope
The Pope is the Bishop of Rome, a position that makes him the leader of the worldwide Catholic Church . In the Catholic Church, the Pope is regarded as the successor of Saint Peter, the Apostle...
from May 13, 535, to April 22, 536. He is not to be confused with another Saint Agapetus, an Early Christian martyr with the feast day of August 6th.

Agapetus was born in Rome
Rome
Rome is the capital of Italy and the country's largest and most populated city and comune, with over 2.7 million residents in . The city is located in the central-western portion of the Italian Peninsula, on the Tiber River within the Lazio region of Italy.Rome's history spans two and a half...
, although his exact date of birth is unknown. He was the son of Gordianus, a Roman priest
Priest
A priest is a person authorized to perform the sacred rites of a religion, especially as a mediatory agent between humans and deities. They also have the authority or power to administer religious rites; in particular, rites of sacrifice to, and propitiation of, a deity or deities...
who had been slain during the riots in the days of Pope Symmachus
Pope Symmachus
Saint Symmachus was pope from 498 to 514. His tenure was marked by a serious schism over who was legitimately elected pope by the citizens of Rome....
(term 498-514). The name of his father might point to a familial relation with two other Popes: Felix III
Pope Felix III
Pope Saint Felix III was pope from March 13, 483 to january 3, 492. His repudiation of the Henoticon is considered the beginning of the Acacian schism.-Biography:...
(term 483-492) and Gregory I
Pope Gregory I
Pope Gregory I , better known in English as Gregory the Great, was pope from 3 September 590 until his death...
(term 590-604). Gregory was a descendant of Felix. Gregory's father, Gordianus, held the position of Regionarius in the Roman Church. Nothing further is known about the position.

Agapetus collaborated with Cassiodorus
Cassiodorus
Flavius Magnus Aurelius Cassiodorus Senator , commonly known as Cassiodorus, was a Roman statesman and writer, serving in the administration of Theodoric the Great, king of the Ostrogoths. Senator was part of his surname, not his rank.- Life :Cassiodorus was born at Scylletium, near Catanzaro in...
in founding at Rome
Rome
Rome is the capital of Italy and the country's largest and most populated city and comune, with over 2.7 million residents in . The city is located in the central-western portion of the Italian Peninsula, on the Tiber River within the Lazio region of Italy.Rome's history spans two and a half...
a library of ecclesiastical authors in Greek
Greek language
Greek is an independent branch of the Indo-European family of languages. Native to the southern Balkans, it has the longest documented history of any Indo-European language, spanning 34 centuries of written records. Its writing system has been the Greek alphabet for the majority of its history;...
and Latin
Latin
Latin is an Italic language originally spoken in Latium and Ancient Rome. It, along with most European languages, is a descendant of the ancient Proto-Indo-European language. Although it is considered a dead language, a number of scholars and members of the Christian clergy speak it fluently, and...
, and helped Cassiodorus with the project of translating the standard Greek philosopher
Greek philosophy
Ancient Greek philosophy arose in the 6th century BCE and continued through the Hellenistic period, at which point Ancient Greece was incorporated in the Roman Empire...
s into Latin.

Jeffrey Richards describes him as "the last survivor of the Symmachan
Pope Symmachus
Saint Symmachus was pope from 498 to 514. His tenure was marked by a serious schism over who was legitimately elected pope by the citizens of Rome....
old guard", having been ordained as a deacon perhaps as early as 502, during the Laurentian schism. He was elevated from archdeacon
Archdeacon
An archdeacon is a senior clergy position in Anglicanism, Syrian Malabar Nasrani, Chaldean Catholic, and some other Christian denominations, above that of most clergy and below a bishop. In the High Middle Ages it was the most senior diocesan position below a bishop in the Roman Catholic Church...
to pope in 535. His first official act was to burn, in the presence of the assembled clergy, the anathema which Boniface II had pronounced against the latter's deceased rival Dioscurus, on a false charge of Simony
Simony
Simony is the act of paying for sacraments and consequently for holy offices or for positions in the hierarchy of a church, named after Simon Magus , who appears in the Acts of the Apostles 8:9-24...
, and had ordered to be preserved in the Roman archives.

He confirmed the decrees of the council of Carthage, after the retaking of North Africa from the Vandals, according to which converts from Arianism
Arianism
Arianism is the theological teaching attributed to Arius , a Christian presbyter from Alexandria, Egypt, concerning the relationship of the entities of the Trinity and the precise nature of the Son of God as being a subordinate entity to God the Father...
were declared ineligible to Holy Orders
Holy Orders
The term Holy Orders is used by many Christian churches to refer to ordination or to those individuals ordained for a special role or ministry....
and those already ordained were merely admitted to lay communion
Lay communion
Lay communion is a term applied in the Catholic Church, to describe the status of a cleric who is in communion with the Church, but only with the standing of a lay person...
. He accepted an appeal from Contumeliosus, Bishop of Riez, whom a council at Marseilles had condemned for immorality, and he ordered Caesarius of Arles to grant the accused a new trial before papal delegates.

Meanwhile the Byzantine
Byzantine
Byzantine usually refers to the Roman Empire during the Middle Ages.Byzantine may also refer to:* A citizen of the Byzantine Empire, or native Greek during the Middle Ages...
general Belisarius
Belisarius
Flavius Belisarius was a general of the Byzantine Empire. He was instrumental to Emperor Justinian's ambitious project of reconquering much of the Mediterranean territory of the former Western Roman Empire, which had been lost less than a century previously....
was preparing for an invasion of Italy
Italy
Italy , officially the Italian Republic languages]] under the European Charter for Regional or Minority Languages. In each of these, Italy's official name is as follows:;;;;;;;;), is a unitary parliamentary republic in South-Central Europe. To the north it borders France, Switzerland, Austria and...
. King Theodahad
Theodahad
Theodahad was the King of the Ostrogoths from 534 to 536 and a nephew of Theodoric the Great through his sister Amalafrida. He might have arrived in Italy with Theodoric and was an elderly man at the time of his succession...
of the Ostrogoths, begged Agapetus to proceed on an embassy to Constantinople
Constantinople
Constantinople was the capital of the Roman, Eastern Roman, Byzantine, Latin, and Ottoman Empires. Throughout most of the Middle Ages, Constantinople was Europe's largest and wealthiest city.-Names:...
, and use his personal influence to appease Emperor Justinian I
Justinian I
Justinian I ; , ; 483– 13 or 14 November 565), commonly known as Justinian the Great, was Byzantine Emperor from 527 to 565. During his reign, Justinian sought to revive the Empire's greatness and reconquer the lost western half of the classical Roman Empire.One of the most important figures of...
following the death of Amalasuntha
Amalasuntha
Amalasuntha was a queen of the Ostrogoths from 526 to 534....
. To defray the costs of the embassy, Agapetus pledged the sacred vessels of the Church of Rome. He set out in midwinter with five bishops and a large retinue. In February, 536, he appeared in the capital of the East. Agapetus immediately turned his attention from the political matter Theodahad had sent him to address to a religious one.

The occupant of the Byzantine patriarchal see was Anthimus I, who had left his episcopal see of Trebizond. Against the protests of the orthodox, the Empress Theodora
Theodora (6th century)
Theodora , was empress of the Roman Empire and the wife of Emperor Justinian I. Like her husband, she is a saint in the Orthodox Church, commemorated on November 14...
finally seated Anthimus in the patriarchal chair. When Agapetus arrived members of the clergy entered charges against Anthimus as an intruder and a heretic. Agapetus ordered him to make a written profession of faith and to return to his forsaken see; upon Anthimus' refusal, Agapetus declined to have any relations with him. The Emperor threatened Agapetus with banishment. Agapetus is said to have replied, "With eager longing have I come to gaze upon the Most Christian Emperor Justinian. In his place I find a Diocletian
Diocletian
Diocletian |latinized]] upon his accession to Diocletian . c. 22 December 244  – 3 December 311), was a Roman Emperor from 284 to 305....
, whose threats, however, terrify me not." Justinian, for the first time in the history of the Church, personally consecrated Anthimus' legally elected successor, Mennas
Patriarch Mennas of Constantinople
Menas or Mennas or Minas or Mina, a Christian saint was appointed by the Byzantine emperor Justinian I as Patriarch of Constantinople in 536. Pope Agapetus I consecrated him to succeed Bishop Anthimus, who was a monophysite. He took a position against Origen...
.
Justinian delivered to the Pope a written confession of faith, which the latter accepted with the proviso that "although he could not admit in a layman the right of teaching religion, yet he observed with pleasure that the zeal of the Emperor was in perfect accord with the decisions of the Fathers". Four of Agapetus letters have survived. Two are addressed to Justinian in reply to a letter from the emperor, in the latter of which he refuses to acknowledge the Orders of the Arians
Arianism
Arianism is the theological teaching attributed to Arius , a Christian presbyter from Alexandria, Egypt, concerning the relationship of the entities of the Trinity and the precise nature of the Son of God as being a subordinate entity to God the Father...
. A third is addressed to the bishops of Africa, on the same subject. The fourth is a response to Reparatus, Bishop of Carthage
Patriarchate of Carthage
This is a list of bishops and archbishops of Carthage, often referred to as Primate proconsular Africa, Numidia, Mauritania and Tripolitania. Until the seventh century, the bishops are recognized by the Orthodox Church and The Roman Church as their own....
, who had sent him congratulations upon his elevation to the Pontificate.
Shortly afterwards Agapetus fell ill and died on April 22, 536, after a reign of ten months. His remains were brought in a lead coffin to Rome and deposited in St. Peter's Basilica
St. Peter's Basilica
The Papal Basilica of Saint Peter , officially known in Italian as ' and commonly known as Saint Peter's Basilica, is a Late Renaissance church located within the Vatican City. Saint Peter's Basilica has the largest interior of any Christian church in the world...
.