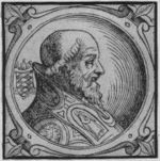 Encyclopedia
Pope Victor II born Gebhard, Count of Calw, Tollenstein, and Hirschberg, was Pope
Pope
The Pope is the Bishop of Rome, a position that makes him the leader of the worldwide Catholic Church . In the Catholic Church, the Pope is regarded as the successor of Saint Peter, the Apostle...
from 1055 to 1057. He was one of a series of German reform
Gregorian Reform
The Gregorian Reforms were a series of reforms initiated by Pope Gregory VII and the circle he formed in the papal curia, circa 1050–80, which dealt with the moral integrity and independence of the clergy...
Popes.

He was born Gebhard of Calw
Calw
Calw is a municipality in the middle of Baden-Württemberg in the south of Germany, capital of the district Calw. It is located in the northern Black Forest.-History:...
, a son of the Swabia
Swabia
Swabia is a cultural, historic and linguistic region in southwestern Germany.-Geography:Like many cultural regions of Europe, Swabia's borders are not clearly defined...
n Count Hartwig of Calw and a kinsman of Emperor Henry III
Henry III, Holy Roman Emperor
Henry III , called the Black or the Pious, was a member of the Salian Dynasty of Holy Roman Emperors...
(1039–1056). At the insistence of Gebhard, bishop of Ratisbon, the 24-year-old Gebhard was appointed bishop of Eichstätt
Bishop of Eichstätt
-Bishops of Eichstätt, 741-1790:*Willibald 741-786*Geroch 786-801*Aganus 801-819*Adalung 820-841*Altun 841-858*Ottokar 858-881*Gottschalk 881-884*Erkenbald 884-916*Udalfried 916-933*Starchand 933-966*Reginald 966-989*Megingoz von Lechsgemund 989-1014...
. In this position, he supported the Emperor's interests and eventually became one of his closest advisors.

After the death of Pope Leo IX
Pope Leo IX
Pope Saint Leo IX , born Bruno of Eguisheim-Dagsburg, was Pope from February 12, 1049 to his death. He was a German aristocrat and as well as being Pope was a powerful secular ruler of central Italy. He is regarded as a saint by the Roman Catholic Church, with the feast day of April 19...
, a Roman delegation headed by Hildebrand, later Pope Gregory VII
Pope Gregory VII
Pope St. Gregory VII , born Hildebrand of Sovana , was Pope from April 22, 1073, until his death. One of the great reforming popes, he is perhaps best known for the part he played in the Investiture Controversy, his dispute with Henry IV, Holy Roman Emperor affirming the primacy of the papal...
, travelled to Mainz and asked the Emperor for the nomination of a successor and suggested Gebhard, who was duly nominated in September 1054. Gebhard, taking the name Victor II, moved to Rome and was enthroned in St. Peter's Basilica
St. Peter's Basilica
The Papal Basilica of Saint Peter , officially known in Italian as ' and commonly known as Saint Peter's Basilica, is a Late Renaissance church located within the Vatican City. Saint Peter's Basilica has the largest interior of any Christian church in the world...
on April 13, 1055.

In June 1055, Victor met the Emperor at Florence
Florence
Florence is the capital city of the Italian region of Tuscany and of the province of Florence. It is the most populous city in Tuscany, with approximately 370,000 inhabitants, expanding to over 1.5 million in the metropolitan area....
and held a council, which reinforced Pope Leo IX
Pope Leo IX
Pope Saint Leo IX , born Bruno of Eguisheim-Dagsburg, was Pope from February 12, 1049 to his death. He was a German aristocrat and as well as being Pope was a powerful secular ruler of central Italy. He is regarded as a saint by the Roman Catholic Church, with the feast day of April 19...
's (1049–1054) condemnation of clerical marriage, simony
Simony
Simony is the act of paying for sacraments and consequently for holy offices or for positions in the hierarchy of a church, named after Simon Magus , who appears in the Acts of the Apostles 8:9-24...
, and the loss of the church's properties. In the following year, he was summoned to the Emperor's side, and was with Henry III when he died at Bodfeld
Bodfeld
Bodfeld was a small royal palace or lodge that was primarily established for hunting purposes and, when the town of Elbingerode was emerged, for the administration of ore mining in the central Harz that underpinned the power of the Ottonian and Salian kings and emperors in medieval Europe...
in the Harz
Harz
The Harz is the highest mountain range in northern Germany and its rugged terrain extends across parts of Lower Saxony, Saxony-Anhalt and Thuringia. The name Harz derives from the Middle High German word Hardt or Hart , latinized as Hercynia. The legendary Brocken is the highest summit in the Harz...
on 5 October 1056. As guardian of Henry III's infant son Henry
Henry IV, Holy Roman Emperor
Henry IV was King of the Romans from 1056 and Holy Roman Emperor from 1084 until his forced abdication in 1105. He was the third emperor of the Salian dynasty and one of the most powerful and important figures of the 11th century...
(1056–1105) and adviser of the Empress Agnes
Agnes de Poitou
Agnes of Poitou, Agnes of Aquitaine or Empress Agnes was Holy Roman Empress and regent of the Holy Roman Empire from 1056 to 1062.-Family:...
, Henry IV's mother and regent, Victor II now wielded enormous power, which he used to maintain peace throughout the empire and to strengthen the papacy against the aggressions of the barons. He died shortly after his return to Italy, at Arezzo
Arezzo
Arezzo is a city and comune in Central Italy, capital of the province of the same name, located in Tuscany. Arezzo is about 80 km southeast of Florence, at an elevation of 296 m above sea level. In 2011 the population was about 100,000....
, on July 28, 1057.

Victor II's retinue wished to bring his remains to the cathedral at Eichstätt
Eichstätt
Eichstätt is a town in the federal state of Bavaria, Germany, and capital of the District of Eichstätt. It is located along the Altmühl River, at , and had a population of 13,078 in 2002. It is home to the Katholische Universität Eichstätt-Ingolstadt, the lone Catholic university in Germany. The...
for burial. Before they reached the city, however, the remains were seized by some citizens of Ravenna
Ravenna
Ravenna is the capital city of the Province of Ravenna in the Emilia-Romagna region of Italy and the second largest comune in Italy by land area, although, at , it is little more than half the size of the largest comune, Rome...
and buried there in the Church of Santa Maria Rotonda
Mausoleum of Theodoric
The Mausoleum of Theodoric is an ancient monument just outside Ravenna, Italy. It was built in 520 AD by Theodoric the Great as his future tomb.-Description:...
, the burial place of Theodoric the Great
Theodoric the Great
Theodoric the Great was king of the Ostrogoths , ruler of Italy , regent of the Visigoths , and a viceroy of the Eastern Roman Empire...
.

Although there have been eight German Popes, Victor II is one of only three Popes from the territory of present-day Germany
Germany
Germany , officially the Federal Republic of Germany , is a federal parliamentary republic in Europe. The country consists of 16 states while the capital and largest city is Berlin. Germany covers an area of 357,021 km2 and has a largely temperate seasonal climate...
, the others being Pope Clement II
Pope Clement II
Pope Clement II , was Pope from December 25, 1046 to his death. He was the first in a series of reform-minded popes from Germany.Born in Hornburg, Lower Saxony, Germany, he was the son of Count Konrad of Morsleben and Hornburg and his wife Amulrad.In 1040, he became Bishop of Bamberg...
(1046–47) and the current Benedict XVI
Pope Benedict XVI
Benedict XVI is the 265th and current Pope, by virtue of his office of Bishop of Rome, the Sovereign of the Vatican City State and the leader of the Catholic Church as well as the other 22 sui iuris Eastern Catholic Churches in full communion with the Holy See...
.
The source of this article is wikipedia, the free encyclopedia.  The text of this article is licensed under the GFDL.