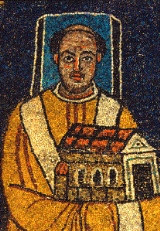 Encyclopedia
Pope Saint Paschal I was pope
Pope
The Pope is the Bishop of Rome, a position that makes him the leader of the worldwide Catholic Church . In the Catholic Church, the Pope is regarded as the successor of Saint Peter, the Apostle...
from January 25, 817 to February 11, 824. A native of Rome
Rome
Rome is the capital of Italy and the country's largest and most populated city and comune, with over 2.7 million residents in . The city is located in the central-western portion of the Italian Peninsula, on the Tiber River within the Lazio region of Italy.Rome's history spans two and a half...
and son of Bonosus, he was raised to the pontificate by the acclamation of the clergy, shortly after the death of Pope Stephen IV
Pope Stephen IV
Pope Stephen IV was Pope from June 816 to January 817.He succeeded Leo III, whose policies favoring clergy over lay aristocracy he did not continue. Immediately after his consecration he ordered the Roman people to swear fidelity to the Frankish king Louis the Pious, to whom he went personally in...
, and before the sanction of the emperor Louis the Pious
Louis the Pious
Louis the Pious , also called the Fair, and the Debonaire, was the King of Aquitaine from 781. He was also King of the Franks and co-Emperor with his father, Charlemagne, from 813...
had been obtained - a circumstance for which it was one of his first cares to apologize. His relations with the imperial house, however, never became cordial; and he was also unsuccessful in winning the sympathy of the Roman nobles.

In 822, he gave the legateship over the North (Scandinavia
Scandinavia
Scandinavia is a cultural, historical and ethno-linguistic region in northern Europe that includes the three kingdoms of Denmark, Norway and Sweden, characterized by their common ethno-cultural heritage and language. Modern Norway and Sweden proper are situated on the Scandinavian Peninsula,...
) to Ebbo, archbishop of Rheims. He licensed him to preach to the Danes, though Ebbo failed in three different attempts to convert them. Only later did Saint Ansgar succeed there.

He died in Rome while the imperial commissioners were investigating the circumstances under which two papal officials that were testifying against the pope had been seized at the Lateran
Lateran
Lateran and Laterano are the shared names of several architectural projects throughout Rome. The properties were once owned by the Lateranus family of the former Roman Empire...
, blinded and afterwards beheaded; Paschal had shielded the murderers but denied all personal complicity in their crime. The Roman people refused him the honour of burial within the church of St Peter
St. Peter's Basilica
The Papal Basilica of Saint Peter , officially known in Italian as ' and commonly known as Saint Peter's Basilica, is a Late Renaissance church located within the Vatican City. Saint Peter's Basilica has the largest interior of any Christian church in the world...
, but he now holds a place in the Roman calendar (prior to 1963, May 14; currently February 11).

The church of Santa Cecilia in Trastevere
Santa Cecilia in Trastevere
Santa Cecilia in Trastevere is a 5th century church in Rome, Italy, devoted to Saint Cecilia, in the Trastevere rione.-History:The first church on this site was founded probably in the 3rd century, by Pope Urban I; it was devoted to the Roman martyr Cecilia, martyred it is said under Marcus...
was restored and Santa Maria in Domnica
Santa Maria in Domnica
Santa Maria in Domnica — also known as Santa Maria alla Navicella — is a basilica church in Rome.-History:The church was built in ancient times, close to the Vigiles 5th cohort's barracks. The church was built no later than the 7th century...
rebuilt by him; he also extensively renovated the basilica of Santa Prassede
Santa Prassede
The Basilica of Saint Praxedes , commonly known in Italian as Santa Prassede, is an ancient titular church and minor basilica in Rome, Italy, located near the papal basilica of Saint Mary Major...
, which includes the famous Episcopa Theodora
Episcopa Theodora
Episcopa Theodora is the inscription on a 9th century mosaic in the St. Zeno Chapel of the Church of St. Praxedis in Rome. Historically, Theodora was the mother of Pope Paschal I, who built the chapel for her while she was still alive....
mosaic of his mother.