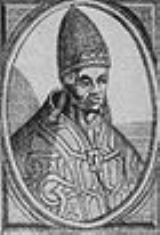 He was born in Segni
Segni
Segni is an Italian town and comune located in Lazio. The city is situated on a hilltop in the Lepini Mountains, and overlooks the valley of the Sacco River.-Early history:...
, Lazio, the son of Anastasius.

After the death of Pope Eugene I
Pope Eugene I
Pope Saint Eugene I or Eugenius I, was pope from 10 August 654, to 1 June 657.He was a native of Rome, born to one Rufinianus. He was elected pope on 10 August 654, ascended in 655, and died on 1 June 657, of natural causes.-Early life:...
, on June 2 or 3, 657, Vitalian was elected his successor, and was consecrated
Consecration
Consecration is the solemn dedication to a special purpose or service, usually religious. The word "consecration" literally means "to associate with the sacred". Persons, places, or things can be consecrated, and the term is used in various ways by different groups...
and enthroned on July 30.

Like Eugene, Vitalian tried to restore the connection with Constantinople by making friendly advances to the Eastern Emperor Constans II (641–668) and to prepare the way for the settlement of the Monothelite controversy. He sent letters (synodica) announcing his elevation to the emperor and to Patriarch Peter of Constantinople, who was inclined to Monothelitism. The emperor confirmed the privileges of the Holy See
Holy See
The Holy See is the episcopal jurisdiction of the Catholic Church in Rome, in which its Bishop is commonly known as the Pope. It is the preeminent episcopal see of the Catholic Church, forming the central government of the Church. As such, diplomatically, and in other spheres the Holy See acts and...
as head of the Catholic Church and sent to Rome a codex of the Gospels in a cover of gold richly ornamented with precious stones as a good-will gesture.

The Patriarch Peter also replied, although his answer was somewhat noncommittal as to Monothelitism, a belief he defended. In his letter, he gave the impression of being in accord with the pope, whose letter to Peter had expounded the Catholic Faith. Thus ecclesiastical intercourse between Rome and Constantinople was restored, but the mutual reserve over the dogmatic question of Monothelitism remained. Vitalian's name was entered on the diptych
Diptych
A diptych di "two" + ptychē "fold") is any object with two flat plates attached at a hinge. Devices of this form were quite popular in the ancient world, wax tablets being coated with wax on inner faces, for recording notes and for measuring time and direction.In Late Antiquity, ivory diptychs with...
s of the churches in Byzantium—the only name of a pope so entered between the reign of Honorius I (d. 638) and the Sixth Ecumenical Council of 680–81.

The inclusion of Vitalian's name on the diptych was seen as some as being too conciliatory towards heresy, but that charge was unfounded.

Vitalian showed reciprocity toward Constans, when the latter came to Rome in 663, spending twelve days there during a campaign against the Lombards
Lombards
The Lombards , also referred to as Longobards, were a Germanic tribe of Scandinavian origin, who from 568 to 774 ruled a Kingdom in Italy...
. On 5 July the pope and members of the Roman clergy, met the emperor at the sixth milestone and accompanied him to St. Peter's, where the emperor offered gifts. The following Sunday, Constans went in state to St. Peter's, offered a pallium wrought with gold, and was present during the Mass
Mass (liturgy)
"Mass" is one of the names by which the sacrament of the Eucharist is called in the Roman Catholic Church: others are "Eucharist", the "Lord's Supper", the "Breaking of Bread", the "Eucharistic assembly ", the "memorial of the Lord's Passion and Resurrection", the "Holy Sacrifice", the "Holy and...
celebrated by the pope. The emperor dined with the pope on the following Saturday, attended Mass again on Sunday at St. Peter's, and after Mass took leave of the pope. On his departure Constans removed a large number of bronze artworks, including the bronze tiles from the roof of the Pantheon
Pantheon, Rome
The Pantheon ,Rarely Pantheum. This appears in Pliny's Natural History in describing this edifice: Agrippae Pantheum decoravit Diogenes Atheniensis; in columnis templi eius Caryatides probantur inter pauca operum, sicut in fastigio posita signa, sed propter altitudinem loci minus celebrata.from ,...
, which had been dedicated to Christian worship.

Constans then moved on to Sicily
Sicily
Sicily is a region of Italy, and is the largest island in the Mediterranean Sea. Along with the surrounding minor islands, it constitutes an autonomous region of Italy, the Regione Autonoma Siciliana Sicily has a rich and unique culture, especially with regard to the arts, music, literature,...
, oppressed the population, and was assassinated at Syracuse in 668. Vitalian supported Constans' son Constantine IV
Constantine IV
Constantine IV , , sometimes incorrectly called Pogonatos, "the Bearded", by confusion with his father; was Byzantine emperor from 668 to 685...
against the usurper Mezezius
Mezezius
Mezezius was an Armenian noble who served as a general of Byzantium, later usurping the Byzantine throne in Sicily from 668 to 669.According to a letter from Pope Gregory II to Emperor Leo III, he was Count of the Opsikion, the imperial retinue , and a later Syriac chronicle describes him as a...
and thus helped him attain the throne. As Constantine had no desire to maintain the Monothelite decree (typus) of his father, Pope Vitalian made use of this inclination to take a more decided stand against Monothelitism and to win the emperor over to orthodoxy. In this latter attempt, however, he did not succeed. The Monothelite patriarch Theodore of Constantinople removed Vitalian's name from the diptychs. It was not until the Sixth Ecumenical Council (681) that Monothelitism was suppressed, and Vitalian's name was replaced on the diptychs of the churches in Byzantium.

Pope Vitalian was successful in improving relations with England, where the Anglo-Saxon
Anglo-Saxons
Anglo-Saxon is a term used by historians to designate the Germanic tribes who invaded and settled the south and east of Great Britain beginning in the early 5th century AD, and the period from their creation of the English nation to the Norman conquest. The Anglo-Saxon Era denotes the period of...
and British clergies were divided regarding various ecclesiastical customs. At the Synod of Streaneshalch, King Oswy of Northumberland accepted Roman practices regarding the keeping of Easter, and the shape of the tonsure. Together with King Egbert of Kent
Kent
Kent is a county in southeast England, and is one of the home counties. It borders East Sussex, Surrey and Greater London and has a defined boundary with Essex in the middle of the Thames Estuary. The ceremonial county boundaries of Kent include the shire county of Kent and the unitary borough of...
, he sent the priest Wighard to Rome, to be consecrated there after the death of Archbishop Deusdedit of Canterbury
Deusdedit of Canterbury
Deusdedit , perhaps originally named Frithona, Frithuwine or Frithonas, was a medieval Archbishop of Canterbury, the first native-born holder of the see of Canterbury. By birth an Anglo-Saxon, he became archbishop in 655 and held the office for more than nine years until his death, probably from...
in 664, but Wighard died at Rome of the plague.

Vitalian wrote to King Oswy promising to send a suitable bishop to England as soon as possible. Hadrian, abbot of a Neapolitan abbey, was selected, but he considered himself unworthy to be bishop. At his recommendation a highly educated monk, Theodore of Tarsus
Theodore of Tarsus
Theodore was the eighth Archbishop of Canterbury, best known for his reform of the English Church and establishment of a school in Canterbury....
, who understood both Latin
Latin
Latin is an Italic language originally spoken in Latium and Ancient Rome. It, along with most European languages, is a descendant of the ancient Proto-Indo-European language. Although it is considered a dead language, a number of scholars and members of the Christian clergy speak it fluently, and...
and Greek
Greek language
Greek is an independent branch of the Indo-European family of languages. Native to the southern Balkans, it has the longest documented history of any Indo-European language, spanning 34 centuries of written records. Its writing system has been the Greek alphabet for the majority of its history;...
, was chosen as Archbishop of Canterbury
Archbishop of Canterbury
The Archbishop of Canterbury is the senior bishop and principal leader of the Church of England, the symbolic head of the worldwide Anglican Communion, and the diocesan bishop of the Diocese of Canterbury. In his role as head of the Anglican Communion, the archbishop leads the third largest group...
and consecrated on 26 March 668. Accompanied by Abbot Hadrian, Theodore went to England, where he was recognized as the head of the Church of England.

The archiepiscopal See
Episcopal See
An episcopal see is, in the original sense, the official seat of a bishop. This seat, which is also referred to as the bishop's cathedra, is placed in the bishop's principal church, which is therefore called the bishop's cathedral...
of Ravenna
Ravenna
Ravenna is the capital city of the Province of Ravenna in the Emilia-Romagna region of Italy and the second largest comune in Italy by land area, although, at , it is little more than half the size of the largest comune, Rome...
reported directly to Rome. Archbishop Maurus of Ravenna (648–71) sought to end this dependence, and thus make his see autocephalous. When Pope Vitalian called upon him to justify his theological views, he refused to obey and declared himself independent of Rome, thus becoming a schismatic
Schism (religion)
A schism , from Greek σχίσμα, skhísma , is a division between people, usually belonging to an organization or movement religious denomination. The word is most frequently applied to a break of communion between two sections of Christianity that were previously a single body, or to a division within...
. The pope excommunicated
Excommunication
Excommunication is a religious censure used to deprive, suspend or limit membership in a religious community. The word means putting [someone] out of communion. In some religions, excommunication includes spiritual condemnation of the member or group...
him, but Maurus did not submit, and even went so far as to declare the pope excommunicated.

Emperor Constans II sided with the archbishop and issued an edict removing the Archbishop of Ravenna from the patriarchal jurisdiction of Rome, and ordained that the former should receive the pallium
Pallium
The pallium is an ecclesiastical vestment in the Roman Catholic Church, originally peculiar to the Pope, but for many centuries bestowed by him on metropolitans and primates as a symbol of the jurisdiction delegated to them by the Holy See. In that context it has always remained unambiguously...
from the emperor. The successor of Maurus, Reparatus, was in fact consecrated, in 671. It was not until the reign of Pope Leo II (682–83) that the independence of the See of Ravenna was suppressed: Emperor Constantine IV repealed the edict of Constans and confirmed the ancient rights of the Roman See over the See of Ravenna.

Vitalian enforced his authority as supreme pontiff in the Eastern regions of the Church. Bishop John of Lappa had been deposed by a synod under the presidency of the Metropolitan Paulus. John appealed to the pope and was imprisoned by Paulus for so doing. He escaped, however, and went to Rome, where Vitalian held a synod in December, 667, to investigate the matter, and pronounced John guiltless. He then wrote to Paulus demanding the restoration of John to his diocese and the return of the monasteries which had been unjustly taken from him. At the same time the pope directed the metropolitan to remove two deacons who had married after consecration.

The introduction of church organ music
Organ (music)
The organ , is a keyboard instrument of one or more divisions, each played with its own keyboard operated either with the hands or with the feet. The organ is a relatively old musical instrument in the Western musical tradition, dating from the time of Ctesibius of Alexandria who is credited with...
is traditionally believed to date from the time of Vitalian's papacy.