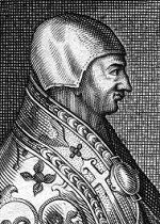 Encyclopedia
Pope Sergius II was Pope
Pope
The Pope is the Bishop of Rome, a position that makes him the leader of the worldwide Catholic Church . In the Catholic Church, the Pope is regarded as the successor of Saint Peter, the Apostle...
from January 844 – January 24, 847.

The Holy Roman Emperor Lothair I
Lothair I
Lothair I or Lothar I was the Emperor of the Romans , co-ruling with his father until 840, and the King of Bavaria , Italy and Middle Francia...
, however, disapproved of this abandoning of the Constitutio Romana
Constitutio Romana
The Constitutio Romana was drawn up between King Lothair I of Italy , co-emperor with his father, Louis the Pious, since 817, and Pope Eugene II and confirmed on 11 November 824. At the time the election of Eugene was being challenged by Zinzinnus, the candidate of the Roman populace...
of 824 which included the statute that no pope should be consecrated until his election had the approval of the Frankish emperor. He sent an army under his son Louis
Louis II, Holy Roman Emperor
Louis II the Younger was the King of Italy and Roman Emperor from 844, co-ruling with his father Lothair I until 855, after which he ruled alone. Louis's usual title was imperator augustus , but he used imperator Romanorum after his conquest of Bari in 871, which led to poor relations with Byzantium...
, the recently appointed viceroy
Viceroy
A viceroy is a royal official who runs a country, colony, or province in the name of and as representative of the monarch. The term derives from the Latin prefix vice-, meaning "in the place of" and the French word roi, meaning king. A viceroy's province or larger territory is called a viceroyalty...
of Italy, to re-establish his authority. The Church and the Emperor reached an accommodation, with Louis being crowned king of Lombardy
Lombardy
Lombardy is one of the 20 regions of Italy. The capital is Milan. One-sixth of Italy's population lives in Lombardy and about one fifth of Italy's GDP is produced in this region, making it the most populous and richest region in the country and one of the richest in the whole of Europe...
by Sergius, although the Pope did not accede to all the demands made upon him.

Sergius contributed to urban redevelopment in Rome
Rome
Rome is the capital of Italy and the country's largest and most populated city and comune, with over 2.7 million residents in . The city is located in the central-western portion of the Italian Peninsula, on the Tiber River within the Lazio region of Italy.Rome's history spans two and a half...
, relying on what some consider to be dubious means of gaining money. Simony
Simony
Simony is the act of paying for sacraments and consequently for holy offices or for positions in the hierarchy of a church, named after Simon Magus , who appears in the Acts of the Apostles 8:9-24...
is said to have flourished during the reign of Sergius II.

During his pontificate Rome was ravaged and the churches of St. Peter
St. Peter's Basilica
The Papal Basilica of Saint Peter , officially known in Italian as ' and commonly known as Saint Peter's Basilica, is a Late Renaissance church located within the Vatican City. Saint Peter's Basilica has the largest interior of any Christian church in the world...
and St. Paul
Basilica of Saint Paul Outside the Walls
The Papal Basilica of St Paul Outside the Walls , commonly known as St Paul's Outside the Walls, is one of four churches that are the great ancient major basilicas or papal basilicas of Rome: the basilicas of St. John Lateran, St. Mary Major, and St. Peter's and Saint Paul Outside the Walls...
were sacked by Saracens, who also assaulted Porto
Porto
Porto , also known as Oporto in English, is the second largest city in Portugal and one of the major urban areas in the Iberian Peninsula. Its administrative limits include a population of 237,559 inhabitants distributed within 15 civil parishes...
and Ostia (August 846). Sergius died while negotiating between two patriarchs and was succeeded by Pope Leo IV
Pope Leo IV
Pope Saint Leo IV was pope from 10 April 847 to 17 July 855.A Roman by birth, he was unanimously chosen to succeed Sergius II. When he was elected, on 10 April 847, he was cardinal of Santi Quattro Coronati, and had been subdeacon of Gregory IV and archpriest under his predecessor...
.