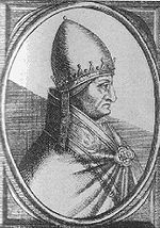 He succeeded Pope Clement IV
Pope Clement IV
Pope Clement IV , born Gui Faucoi called in later life le Gros , was elected Pope February 5, 1265, in a conclave held at Perugia that took four months, while cardinals argued over whether to call in Charles of Anjou, the youngest brother of Louis IX of France...
(1265–68) after the papal chair had been vacant for three years (1268–71) due to divisions among the Cardinals.

Pope Blessed Gregory X (Piacenza
Piacenza
Piacenza is a city and comune in the Emilia-Romagna region of northern Italy. It is the capital of the province of Piacenza...
1210 – Arezzo
Arezzo
Arezzo is a city and comune in Central Italy, capital of the province of the same name, located in Tuscany. Arezzo is about 80 km southeast of Florence, at an elevation of 296 m above sea level. In 2011 the population was about 100,000....
January 10, 1276), born Tebaldo Visconti, was Pope
Pope
The Pope is the Bishop of Rome, a position that makes him the leader of the worldwide Catholic Church . In the Catholic Church, the Pope is regarded as the successor of Saint Peter, the Apostle...
from 1271 to 1276. He was elected by the papal election, 1268–1271
Papal election, 1268–1271
The papal election from November 1268 to September 1, 1271, following the death of Pope Clement IV, was the longest papal election in the history of the Catholic Church. This was due primarily to political infighting between the cardinals...
, the longest papal election in the history of the Roman Catholic Church.

Born in Piacenza
Piacenza
Piacenza is a city and comune in the Emilia-Romagna region of northern Italy. It is the capital of the province of Piacenza...
, he spent most of his ecclesiastical career in the north, in the Low Countries
Low Countries
The Low Countries are the historical lands around the low-lying delta of the Rhine, Scheldt, and Meuse rivers, including the modern countries of Belgium, the Netherlands, Luxembourg and parts of northern France and western Germany....
.

He succeeded Pope Clement IV
Pope Clement IV
Pope Clement IV , born Gui Faucoi called in later life le Gros , was elected Pope February 5, 1265, in a conclave held at Perugia that took four months, while cardinals argued over whether to call in Charles of Anjou, the youngest brother of Louis IX of France...
(1265–68) after the papal chair had been vacant for three years (1268–71) due to divisions among the Cardinals. The equally split French and Italian Cardinals wanted a Pope from their country due to the ongoing political situation with Charles of Anjou. The deadlock was finally broken when the citizens of Viterbo
Viterbo
See also Viterbo, Texas and Viterbo UniversityViterbo is an ancient city and comune in the Lazio region of central Italy, the capital of the province of Viterbo. It is approximately 80 driving / 80 walking kilometers north of GRA on the Via Cassia, and it is surrounded by the Monti Cimini and...
, where the Cardinals were assembled, removed the roof from the building they were meeting in and locked them in, only allowing them bread and water. Three days later, the Cardinals elected Pope Gregory X. He was considered a strong choice because although he was Italian, he had spent most of his career north of the Alps
Alps
The Alps is one of the great mountain range systems of Europe, stretching from Austria and Slovenia in the east through Italy, Switzerland, Liechtenstein and Germany to France in the west....
and thus had not been embroiled in recent Italian political controversies.

His election came as a complete surprise to him, occurring while he was engaged in the Ninth Crusade
Ninth Crusade
The Ninth Crusade, which is sometimes grouped with the Eighth Crusade, is commonly considered to be the last major medieval Crusade to the Holy Land. It took place in 1271–1272....
to Acre
Acre, Israel
Acre , is a city in the Western Galilee region of northern Israel at the northern extremity of Haifa Bay. Acre is one of the oldest continuously inhabited sites in the country....
with Edward I of England
Edward I of England
Edward I , also known as Edward Longshanks and the Hammer of the Scots, was King of England from 1272 to 1307. The first son of Henry III, Edward was involved early in the political intrigues of his father's reign, which included an outright rebellion by the English barons...
(1239–1307) in Palestine
Palestine
Palestine is a conventional name, among others, used to describe the geographic region between the Mediterranean Sea and the Jordan River, and various adjoining lands....
. Not wanting to leave his mission, his first action as Pope was to send out appeals for aid to the Crusaders, and at his final sermon at Acre just before leaving to sail for Italy he famously said "If I forget thee, O Jerusalem, let my right hand forget her cunning" (a quote from Psalm 137
Psalm 137
Psalm 137 is one of the best known of the Biblical psalms. Its opening lines, "By the rivers of Babylon..." have been set to music on several occasions....
).

Sometime between 1271 and 1276, Gregory wrote a letter against the charges of "blood libel" and persecution against the Jews.http://www.fordham.edu/halsall/source/g10-jews.html

On his arrival at Rome
Rome
Rome is the capital of Italy and the country's largest and most populated city and comune, with over 2.7 million residents in . The city is located in the central-western portion of the Italian Peninsula, on the Tiber River within the Lazio region of Italy.Rome's history spans two and a half...
his first act was to summon the council which met at the Second Council of Lyons in 1274 for the purpose of considering the East-West Schism
East-West Schism
The East–West Schism of 1054, sometimes known as the Great Schism, formally divided the State church of the Roman Empire into Eastern and Western branches, which later became known as the Eastern Orthodox Church and the Roman Catholic Church, respectively...
, the condition of the Holy Land
Holy Land
The Holy Land is a term which in Judaism refers to the Kingdom of Israel as defined in the Tanakh. For Jews, the Land's identifiction of being Holy is defined in Judaism by its differentiation from other lands by virtue of the practice of Judaism often possible only in the Land of Israel...
, and the abuses of the Roman Catholic Church
Roman Catholic Church
The Catholic Church, also known as the Roman Catholic Church, is the world's largest Christian church, with over a billion members. Led by the Pope, it defines its mission as spreading the gospel of Jesus Christ, administering the sacraments and exercising charity...
. It was while returning from that council that he died at Arezzo
Arezzo
Arezzo is a city and comune in Central Italy, capital of the province of the same name, located in Tuscany. Arezzo is about 80 km southeast of Florence, at an elevation of 296 m above sea level. In 2011 the population was about 100,000....
on January 10, 1276. He is still buried inside the Cathedral Church. He is responsible for the papal bull
Papal bull
A Papal bull is a particular type of letters patent or charter issued by a Pope of the Catholic Church. It is named after the bulla that was appended to the end in order to authenticate it....
which was subsequently incorporated into the code of canon law
Canon law
Canon law is the body of laws & regulations made or adopted by ecclesiastical authority, for the government of the Christian organization and its members. It is the internal ecclesiastical law governing the Catholic Church , the Eastern and Oriental Orthodox churches, and the Anglican Communion of...
that regulated all conclaves for papal elections until the reforms of Pope Paul VI
Pope Paul VI
Paul VI , born Giovanni Battista Enrico Antonio Maria Montini , reigned as Pope of the Catholic Church from 21 June 1963 until his death on 6 August 1978. Succeeding Pope John XXIII, who had convened the Second Vatican Council, he decided to continue it...
(1963–78).

He was succeeded by Pope Innocent V
Pope Innocent V
Pope Blessed Innocent V , born Pierre de Tarentaise, was Pope from January 21 to June 22, 1276.He was born around 1225 near Moûtiers in the Tarentaise region of the County of Savoy, then part of the Kingdom of Arles in the Holy Roman Empire, but now in southeastern France...
.

The Mongol Ilkhanate
Ilkhanate
The Ilkhanate, also spelled Il-khanate , was a Mongol khanate established in Azerbaijan and Persia in the 13th century, considered a part of the Mongol Empire...
leader Abaqa sent a delegation with over a dozen members to the 1274 Council of Lyon, where plans were made for possible military cooperation between the Mongols and the Europeans. After the Council, Abaqa sent another embassy, led by the Georgian
Georgia (country)
Georgia is a sovereign state in the Caucasus region of Eurasia. Located at the crossroads of Western Asia and Eastern Europe, it is bounded to the west by the Black Sea, to the north by Russia, to the southwest by Turkey, to the south by Armenia, and to the southeast by Azerbaijan. The capital of...
Vassali brothers, to further notify Western leaders of military preparations. Gregory answered that his legate
Papal legate
A papal legate – from the Latin, authentic Roman title Legatus – is a personal representative of the pope to foreign nations, or to some part of the Catholic Church. He is empowered on matters of Catholic Faith and for the settlement of ecclesiastical matters....
s would accompany the Crusade, and that they would be in charge of coordinating military operations with the Il-Khan. However, these projects of a major new Crusade essentially came to a halt with the death of Gregory X on January 10, 1276. The money which had been saved to finance the expedition was instead distributed in Italy.
The source of this article is wikipedia, the free encyclopedia.  The text of this article is licensed under the GFDL.