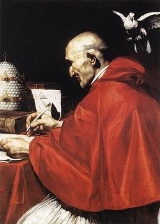 Overview
Pope Gregory I (c. 540 – 12 March 604), better known in English as Gregory the Great, was pope
Pope
The Pope is the Bishop of Rome, a position that makes him the leader of the worldwide Catholic Church . In the Catholic Church, the Pope is regarded as the successor of Saint Peter, the Apostle...
from 3 September 590 until his death. Gregory is well known for his writings, which were more prolific than those of any of his predecessors as pope.

Throughout the Middle Ages he was known as “the Father of Christian Worship” because of his exceptional efforts in revising the Roman worship of his day.

He is also known as St.

What is the source for Pope Gregory I's quote : "Better for scandal to be given than truth. . . ."?
More
x