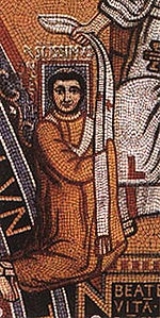 Encyclopedia
Pope Saint Leo III was Pope
Pope
The Pope is the Bishop of Rome, a position that makes him the leader of the worldwide Catholic Church . In the Catholic Church, the Pope is regarded as the successor of Saint Peter, the Apostle...
from 795 to his death in 816. Protected by Charlemagne
Charlemagne
Charlemagne was King of the Franks from 768 and Emperor of the Romans from 800 to his death in 814. He expanded the Frankish kingdom into an empire that incorporated much of Western and Central Europe. During his reign, he conquered Italy and was crowned by Pope Leo III on 25 December 800...
from his enemies in Rome, he subsequently strengthened Charlemagne's position by crowning him as Roman Emperor
Coronation of the Holy Roman Emperor
The Coronation of the Holy Roman Emperor refers to a ceremony in which the ruler of Europe's then largest political entity received the Imperial Regalia at the hands of the Pope, symbolizing the pope's alleged right to crown Christian sovereigns, and the emperor's role as protector of the Roman...
.

Leo, who came from a common-folk background, had risen in the hierarchy of Rome and was elected Pope only one day after the burial of his predecessor, Pope Adrian I
Pope Adrian I
Pope Adrian was pope from February 1, 772 to December 25, 795. He was the son of Theodore, a Roman nobleman.Shortly after Adrian's accession the territory ruled by the papacy was invaded by Desiderius, king of the Lombards, and Adrian was compelled to seek the assistance of the Frankish king...
, who had worked for good relations between Rome and the Frankish Empire
Frankish Empire
Francia or Frankia, later also called the Frankish Empire , Frankish Kingdom , Frankish Realm or occasionally Frankland, was the territory inhabited and ruled by the Franks from the 3rd to the 10th century...
under Charlemagne.
Leo announced his election to Charlemagne, sending him the keys of Saint Peter's tomb
Saint Peter's tomb
Saint Peter's tomb is a site under St. Peter's Basilica that includes several graves and a structure said by Vatican authorities to have been built to memorialize the location of St. Peter's grave. St. Peter's tomb is near the west end of a complex of mausoleums that date between about AD 130 and...
and the banner of Rome
Rome
Rome is the capital of Italy and the country's largest and most populated city and comune, with over 2.7 million residents in . The city is located in the central-western portion of the Italian Peninsula, on the Tiber River within the Lazio region of Italy.Rome's history spans two and a half...
, requesting an envoy. Charlemagne's reply stated that it was his function to defend the Church, and the Popes' to pray for the realm and for victory of the army.

Leo aroused the hostility of Rome's nobility, who saw the papal post as reserved for noble candidates. During his rule, he was accused of adultery and perjury. In April 799, he was attacked by a gang, who unsuccessfully attempted to gouge out his eyes and cut off his tongue for his earlier actions, only to be saved by Magnus Forteman
Magnus Forteman
Magnus Forteman , was the first potestaat and commander of Friesland which is now a province of Netherlands...
and 700 Frisian nobles of his army. He was then formally deposed and sent to a monastery, but escaped and made his way to Paderborn
Paderborn
Paderborn is a city in North Rhine-Westphalia, Germany, capital of the Paderborn district. The name of the city derives from the river Pader, which originates in more than 200 springs near Paderborn Cathedral, where St. Liborius is buried.-History:...
, where he met Charlemagne.

Charlemagne ordered Leo's enemies to Paderborn, but no decision could be found. He then had Leo escorted back to Rome. In November 800, Charlemagne himself went to Rome, and on December 1 held a council there with representatives of both sides. Leo, on December 23, took an oath of purgation
Antejuramentum
Antejuramentum, and præjuramentum, historically called juramentum calumniæ , is an oath which both the accuser and accused were obliged to make before any trial or purgation....
concerning the charges brought against him, and his opponents were exiled.

Two days later, on Christmas Day 800, Leo crowned
Coronation of the Holy Roman Emperor
The Coronation of the Holy Roman Emperor refers to a ceremony in which the ruler of Europe's then largest political entity received the Imperial Regalia at the hands of the Pope, symbolizing the pope's alleged right to crown Christian sovereigns, and the emperor's role as protector of the Roman...
Charlemagne as Roman emperor. This offended Constantinople
Constantinople
Constantinople was the capital of the Roman, Eastern Roman, Byzantine, Latin, and Ottoman Empires. Throughout most of the Middle Ages, Constantinople was Europe's largest and wealthiest city.-Names:...
, which had traditionally been seen as the defender of Rome, but the Eastern Roman Empress Irene of Athens was too weak to oppose Charlemagne. Charlemagne was to intervene in church affairs, not always being successful.

Leo helped restore King Eardwulf of Northumbria
Eardwulf of Northumbria
Eardwulf was king of Northumbria from 796 to 806, when he was deposed and went into exile. He may have had a second reign from 808 until perhaps 811 or 830. Northumbria in the last years of the eighth century was the scene of dynastic strife between several noble families, and, in 790, the...
, and settled various matters of dispute between the Archbishops of York
Archbishop of York
The Archbishop of York is a high-ranking cleric in the Church of England, second only to the Archbishop of Canterbury. He is the diocesan bishop of the Diocese of York and metropolitan of the Province of York, which covers the northern portion of England as well as the Isle of Man...
and Canterbury
Archbishop of Canterbury
The Archbishop of Canterbury is the senior bishop and principal leader of the Church of England, the symbolic head of the worldwide Anglican Communion, and the diocesan bishop of the Diocese of Canterbury. In his role as head of the Anglican Communion, the archbishop leads the third largest group...
. He also reversed the decision of his predecessor, Pope Adrian I
Pope Adrian I
Pope Adrian was pope from February 1, 772 to December 25, 795. He was the son of Theodore, a Roman nobleman.Shortly after Adrian's accession the territory ruled by the papacy was invaded by Desiderius, king of the Lombards, and Adrian was compelled to seek the assistance of the Frankish king...
, in regards to the granting of the pallium
Pallium
The pallium is an ecclesiastical vestment in the Roman Catholic Church, originally peculiar to the Pope, but for many centuries bestowed by him on metropolitans and primates as a symbol of the jurisdiction delegated to them by the Holy See. In that context it has always remained unambiguously...
to the bishop of Lichfield
Bishop of Lichfield
The Bishop of Lichfield is the ordinary of the Church of England Diocese of Lichfield in the Province of Canterbury.The diocese covers 4,516 km² of the counties of Staffordshire, Shropshire, Warwickshire and West Midlands. The bishop's seat is located in the Cathedral Church of the Blessed...
, Higbert. He believed that the English episcopate had been misrepresented before Adrian and that therefore his act was invalid. In 803, Lichfield was a regular diocese again.

Leo forbade the addition of filioque to the Nicene Creed
Nicene Creed
The Nicene Creed is the creed or profession of faith that is most widely used in Christian liturgy. It is called Nicene because, in its original form, it was adopted in the city of Nicaea by the first ecumenical council, which met there in the year 325.The Nicene Creed has been normative to the...
which was added by Franks in Aachen
Aachen
Aachen has historically been a spa town in North Rhine-Westphalia, Germany. Aachen was a favoured residence of Charlemagne, and the place of coronation of the Kings of Germany. Geographically, Aachen is the westernmost town of Germany, located along its borders with Belgium and the Netherlands, ...
in 809. He also ordered that the Nicene creed be engraved on silver tablets so that his conclusion might not be overturned in the future. He wrote «HAEC LEO POSUI AMORE ET CAUTELA ORTHODOXAE FIDEI» (I, Leo, put here for love and protection of orthodox faith).

The reasons for the coronation of Charlemagne, the involvement beforehand of the Frankish
Franks
The Franks were a confederation of Germanic tribes first attested in the third century AD as living north and east of the Lower Rhine River. From the third to fifth centuries some Franks raided Roman territory while other Franks joined the Roman troops in Gaul. Only the Salian Franks formed a...
court, and the relationship to the Eastern Roman Empire are all matters of debate among historians. An effective administrator of the papal territories, Leo contributed to the beautification of Rome.

Leo III was canonized
Canonization
Canonization is the act by which a Christian church declares a deceased person to be a saint, upon which declaration the person is included in the canon, or list, of recognized saints. Originally, individuals were recognized as saints without any formal process...
as saint in 1673 by Pope Clement X
Pope Clement X
Pope Clement X , born Emilio Bonaventura Altieri, was Pope from 29 April 1670 to 22 July 1676.-Early life:Emilio Altieri was born in Rome, the son of Lorenzo Altieri and Victoria Delphini, a Venetian lady...
. His feast day was formerly June 12.

Leo was originally buried in his own monument. However, some years after his death, his remains were put into a tomb that contained the first four Pope Leos. In the 18th century Leo the Great's relics were separated from the other Leos and he was given his own chapel.