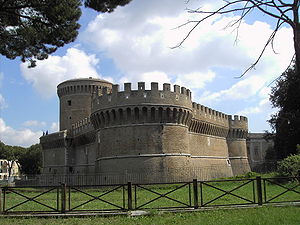 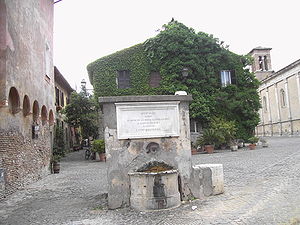 Ostia Antica is a district in the commune of Rome
Rome
Rome is the capital of Italy and the country's largest and most populated city and comune, with over 2.7 million residents in . The city is located in the central-western portion of the Italian Peninsula, on the Tiber River within the Lazio region of Italy.Rome's history spans two and a half...
, Italy
Italy
Italy , officially the Italian Republic languages]] under the European Charter for Regional or Minority Languages. In each of these, Italy's official name is as follows:;;;;;;;;), is a unitary parliamentary republic in South-Central Europe. To the north it borders France, Switzerland, Austria and...
, five kilometers away from the coast. It is distinct from Ostia.

Under the Romans, Ostia Antica reached a peak of some 75,000 inhabitants in the 2nd and 3rd century AD. A slow decline began with the time of Constantine I, and the decaying conditions of the city were mentioned by St. Augustine
Augustine of Hippo
Augustine of Hippo , also known as Augustine, St. Augustine, St. Austin, St. Augoustinos, Blessed Augustine, or St. Augustine the Blessed, was Bishop of Hippo Regius . He was a Latin-speaking philosopher and theologian who lived in the Roman Africa Province...
when he passed through in the late 4th century. His mother, St. Monica
Monica of Hippo
Saint Monica is a Christian saint and the mother of Augustine of Hippo, who wrote extensively of her virtues and his life with her in his Confessions.-Life:...
, died in an inn here. The poet Rutilius Namatianus also reported the lack of maintenance of the city in 414
414
Year 414 was a common year starting on Thursday of the Julian calendar. At the time, it was known as the Year of the Consulship of Constantius and Constans...
. Ostia became an episcopal see
Episcopal See
An episcopal see is, in the original sense, the official seat of a bishop. This seat, which is also referred to as the bishop's cathedra, is placed in the bishop's principal church, which is therefore called the bishop's cathedral...
as early as the 3rd century AD, with the cathedral (titulus) of Santa Aurea
Santa Aurea
The Basilica of Santa Aurea is a church situated in the Ostia Antica district of Ostia, Italy. Ostia became an episcopal see as early as the 3rd century AD...
erected over the tomb of St. Monica.

As the centuries passed, Ostia fell into ruin but remained an access from the sea for visitors to Rome. Saracen
Saracen
Saracen was a term used by the ancient Romans to refer to a people who lived in desert areas in and around the Roman province of Arabia, and who were distinguished from Arabs. In Europe during the Middle Ages the term was expanded to include Arabs, and then all who professed the religion of Islam...
pirates were a frequent concern; the naval Battle of Ostia
Battle of Ostia
The naval Battle of Ostia took place in 849 between some Saracen pirates and an Italian league of Papal, Neapolitan, Amalfitan and Gaetan ships. The battled ended in favor of the Italian league, as they successfully beat off the pirates...
was fought off the coast in 849
849
Year 849 was a common year starting on Tuesday of the Julian calendar.- Asia :* In the Tang Dynasty Chinese capital city of Chang'an, an imperial prince was impeached from his position by officials at court for erecting a building that obstructed a street in the northwesternmost ward in South...
. Pope Gregory IV
Pope Gregory IV
Pope Gregory IV was chosen to succeed Valentine in December 827, on which occasion he recognized the supremacy of the Frankish emperor Louis the Pious in the most unequivocal manner....
fortified the existing burgh and it was rechristened Gregoriopolis. By this time, the shifting course of the Tiber
Tiber
The Tiber is the third-longest river in Italy, rising in the Apennine Mountains in Emilia-Romagna and flowing through Umbria and Lazio to the Tyrrhenian Sea. It drains a basin estimated at...
had landlocked the ancient port, and the town was mainly a shelter for the workers of the nearby salt mills.

In the late 15th century, the bishop Giuliano della Rovere (later Pope Julius II
Pope Julius II
Pope Julius II , nicknamed "The Fearsome Pope" and "The Warrior Pope" , born Giuliano della Rovere, was Pope from 1503 to 1513...
) commissioned the rebuilding of the main church and town walls under the direction of the architect Baccio Pontelli
Baccio Pontelli
Baccio Pontelli was an Italian architect. Baccio is an abbreviation of Bartolomeo.Pontelli was born in Florence. Passing the phase of artistic formation with Giuliano and Benedetto da Maiano in Florence, and influenced by Francesco di Giorgio Martini during the trip to Urbino , he was an in-layer...
. The Castle of Julius II, also built at this time, remains the most striking feature of modern Ostia. The castle was abandoned after a flood in 1587 flooded its moat and turned the surrounding area into a marsh.

The castle and the town were restored again in the 20th century.