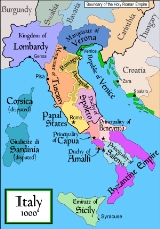 Encyclopedia
The Republic of Pisa was a de facto
De facto
De facto is a Latin expression that means "concerning fact." In law, it often means "in practice but not necessarily ordained by law" or "in practice or actuality, but not officially established." It is commonly used in contrast to de jure when referring to matters of law, governance, or...
independent state centered on the Tuscan
Tuscany
Tuscany is a region in Italy. It has an area of about 23,000 square kilometres and a population of about 3.75 million inhabitants. The regional capital is Florence ....
city of Pisa
Pisa
Pisa is a city in Tuscany, Central Italy, on the right bank of the mouth of the River Arno on the Tyrrhenian Sea. It is the capital city of the Province of Pisa...
during the late tenth and eleventh centuries. It rose to become an economic powerhouse, a commercial center whose merchants dominated Mediterranean and Italian
Italy
Italy , officially the Italian Republic languages]] under the European Charter for Regional or Minority Languages. In each of these, Italy's official name is as follows:;;;;;;;;), is a unitary parliamentary republic in South-Central Europe. To the north it borders France, Switzerland, Austria and...
trade for a century before being surpassed and superseded by Genoa
Republic of Genoa
The Most Serene Republic of Genoa |Ligurian]]: Repúbrica de Zêna) was an independent state from 1005 to 1797 in Liguria on the northwestern Italian coast, as well as Corsica from 1347 to 1768, and numerous other territories throughout the Mediterranean....
. The power of Pisa as a mighty maritime nation began to grow and reached its apex in the 11th century when it acquired traditional fame as one of the four main historical Maritime Republics  of Italy.

At that time the city was a very important commercial center and controlled a significant Mediterranean merchant fleet and navy. It expanded its powers by the sack of Reggio di Calabria in the south of Italy in 1005. Pisa was in continuous conflict with the Saracens, who had their bases in the astersa, for control of the Mediterranean. In alliance with Genoa, Sardinia was captured in 1016
Pisan–Genoese expeditions to Sardinia (1015–1016)
In 1015 and again in 1016 forces from the taifa of Denia, in the east of Muslim Spain , attacked Sardinia and attempted to establish control over it. In both these years joint expeditions from the maritime republics of Pisa and Genoa repulsed the invaders and preserved Sardinia as a part of...
with the defeat of the Saracen king Mugahid. This victory gave Pisa supremacy in the Tyrrhenian Sea
Tyrrhenian Sea
The Tyrrhenian Sea is part of the Mediterranean Sea off the western coast of Italy.-Geography:The sea is bounded by Corsica and Sardinia , Tuscany, Lazio, Campania, Basilicata and Calabria and Sicily ....
. When the Pisans subsequently ousted the Genoese from Sardinia, a new conflict and rivalry was born between the Marine Republics. Between 1030 and 1035 Pisa went on to successfully defeat several rival towns in Sicily and conquer Carthage
Carthage
Carthage , implying it was a 'new Tyre') is a major urban centre that has existed for nearly 3,000 years on the Gulf of Tunis, developing from a Phoenician colony of the 1st millennium BC...
in North Africa. In 1051-1052 the admiral Jacopo Ciurini conquered Corsica, provoking more resentment from the Genoese. In 1063, the Pisans approached the Norman Roger I of Sicily
Roger I of Sicily
Roger I , called Bosso and the Great Count, was the Norman Count of Sicily from 1071 to 1101. He was the last great leader of the Norman conquest of southern Italy.-Conquest of Calabria and Sicily:...
, who was conducting a campaign that would last over three decades to conquer Sicily, with the prospect of a joint attack on Palermo. Roger declined due to other commitments. Without any land support, the Pisan attack failed.

In 1060 Pisa engages in its first battle with Genoa, and the Pisan victory helped to consolidate its position in the Mediterranean. Pope Gregory VII
Pope Gregory VII
Pope St. Gregory VII , born Hildebrand of Sovana , was Pope from April 22, 1073, until his death. One of the great reforming popes, he is perhaps best known for the part he played in the Investiture Controversy, his dispute with Henry IV, Holy Roman Emperor affirming the primacy of the papal...
recognized in 1077 the new "laws and customs of the sea" instituted by the Pisans, and Emperor Henry IV granted them the right to name their own consuls, advised by a Council of Elders. This was simply a confirmation of the present situation, because in those years the marquis had already been excluded from power. In 1092 Pope Urban II
Pope Urban II
Pope Urban II , born Otho de Lagery , was Pope from 12 March 1088 until his death on July 29 1099...
awarded Pisa supremacy over Corsica and Sardinia, and at the same time raised the town to the rank of archbishopric. Pisa sacked the Tunisian city of Mahdia
Mahdia
Mahdia is a provincial centre north of Sfax. It is important for the associated fish-processing industry, as well as weaving. It is the capital of Mahdia Governorate.- History :...
in 1088. Four years later Pisan and Genoese ships helped Alfonso VI of Castile
Alfonso VI of Castile
Alfonso VI , nicknamed the Brave or the Valiant, was King of León from 1065, King of Castile and de facto King of Galicia from 1072, and self-proclaimed "Emperor of all Spain". After the conquest of Toledo he was also self-proclaimed victoriosissimo rege in Toleto, et in Hispania et Gallecia...
to force El Cid
El Cid
Rodrigo Díaz de Vivar , known as El Cid Campeador , was a Castilian nobleman, military leader, and diplomat...
out of Valencia.


Pisa and the Crusades

Pisa and the other Repubbliche Marinare took advantage of the crusade to establish trading posts and colonies in the eastern coastal regions of Syria
Syria
Syria , officially the Syrian Arab Republic , is a country in Western Asia, bordering Lebanon and the Mediterranean Sea to the West, Turkey to the north, Iraq to the east, Jordan to the south, and Israel to the southwest....
, Lebanon
Lebanon
Lebanon , officially the Republic of LebanonRepublic of Lebanon is the most common term used by Lebanese government agencies. The term Lebanese Republic, a literal translation of the official Arabic and French names that is not used in today's world. Arabic is the most common language spoken among...
and Palestine
Palestine
Palestine is a conventional name, among others, used to describe the geographic region between the Mediterranean Sea and the Jordan River, and various adjoining lands....
. In particular the Pisans founded colonies in Antiochia, Acre, Jaffa, Tripoli, Tyre, Joppa, Latakia and Accone. They also had other possessions in Jerusalem and Caesarea, plus smaller colonies (with lesser autonomy) in Cairo, Alexandria and of course Constantinople
Constantinople
Constantinople was the capital of the Roman, Eastern Roman, Byzantine, Latin, and Ottoman Empires. Throughout most of the Middle Ages, Constantinople was Europe's largest and wealthiest city.-Names:...
, where the Byzantine Emperor Alexius I Comnenus granted them special mooring and trading rights. In all these cities the Pisans were granted privileges and immunity from taxation, but had to contribute to their defence in case of attack. In the 12th century the Pisan quarter in the eastern part of Constantinople had grown to 1,000 people. For some years of that century Pisa was the most prominent merchant and military ally of the Byzantine Empire, surpassing Venice itself.

In the Western Mediterranean, though Pope Gregory VII
Pope Gregory VII
Pope St. Gregory VII , born Hildebrand of Sovana , was Pope from April 22, 1073, until his death. One of the great reforming popes, he is perhaps best known for the part he played in the Investiture Controversy, his dispute with Henry IV, Holy Roman Emperor affirming the primacy of the papal...
had granted suzerainty over the Balearics to Pisa in 1085 and Pisan merchants were among the initiators of the 1113–1115 Balearic Islands expedition
1113–1115 Balearic Islands expedition
In 1114, an expedition to the Balearic Islands, then a Muslim taifa, was launched in the form of a Crusade. Founded on a treaty of 1113 between the Republic of Pisa and Ramon Berenguer III, Count of Barcelona, the expedition had the support of Pope Paschal II and the participation of many lords of...
, the enterprise was unsuccessful in permanently dislodging the Muslim taifa
Taifa
In the history of the Iberian Peninsula, a taifa was an independent Muslim-ruled principality, usually an emirate or petty kingdom, though there was one oligarchy, of which a number formed in the Al-Andalus after the final collapse of the Umayyad Caliphate of Córdoba in 1031.-Rise:The origins of...
there.

The power of Pisa as an international power was destroyed forever by the crushing defeat of its navy in the Battle of Meloria against Genoa (1284), in which most of its galleys were destroyed and many of its mariners were taken prisoner. In 1290 an assault by Genoese ships against the Porto Pisano caused its destruction.

As part of Visconti's dominions after 1399, Pisa was then sold to Florence
Republic of Florence
The Republic of Florence , or the Florentine Republic, was a city-state that was centered on the city of Florence, located in modern Tuscany, Italy. The republic was founded in 1115, when the Florentine people rebelled against the Margraviate of Tuscany upon Margravine Matilda's death. The...
in 1402; after a bloody and useless resistance, the municipality was at last subjected in 1406.