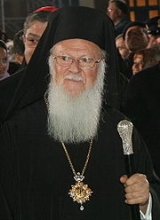 Overview
The Ecumenical Patriarch is the Archbishop of Constantinople
Constantinople
Constantinople was the capital of the Roman, Eastern Roman, Byzantine, Latin, and Ottoman Empires. Throughout most of the Middle Ages, Constantinople was Europe's largest and wealthiest city.-Names:...
– New Rome – ranking as primus inter pares
Primus inter pares
Primus inter pares is Latin phrase describing the most senior person of a group sharing the same rank or office.When not used in reference to a specific title, it may indicate that the person so described is formally equal, but looked upon as an authority of special importance by their peers...
(first among equals) in the Eastern Orthodox communion
Eastern Orthodox Church organization
This article covers the organization of the Eastern Orthodox Churches rather than the doctrines, traditions, practices, or other aspects of Eastern Orthodoxy...
, which is seen by followers as the One, Holy, Catholic, and Apostolic Church.