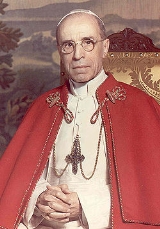 Overview
The Venerable Pope Pius XII , born Eugenio Maria Giuseppe Giovanni Pacelli (2 March 1876 – 9 October 1958), reigned as Pope
Pope
The Pope is the Bishop of Rome, a position that makes him the leader of the worldwide Catholic Church . In the Catholic Church, the Pope is regarded as the successor of Saint Peter, the Apostle...
, head of the Catholic Church and sovereign
Monarch
A monarch is the person who heads a monarchy. This is a form of government in which a state or polity is ruled or controlled by an individual who typically inherits the throne by birth and occasionally rules for life or until abdication...
of Vatican City
Vatican City
Vatican City , or Vatican City State, in Italian officially Stato della Città del Vaticano , which translates literally as State of the City of the Vatican, is a landlocked sovereign city-state whose territory consists of a walled enclave within the city of Rome, Italy. It has an area of...
State, from 2 March 1939 until his death in 1958.

Before election
Papal conclave
A papal conclave is a meeting of the College of Cardinals convened to elect a Bishop of Rome, who then becomes the Pope during a period of vacancy in the papal office. The Pope is considered by Roman Catholics to be the apostolic successor of Saint Peter and earthly head of the Roman Catholic Church...
to the papacy, Pacelli served as secretary of the Department of Extraordinary Ecclesiastical Affairs, papal nuncio and Cardinal Secretary of State
Cardinal Secretary of State
The Cardinal Secretary of State—officially Secretary of State of His Holiness The Pope—presides over the Holy See, usually known as the "Vatican", Secretariat of State, which is the oldest and most important dicastery of the Roman Curia...
, in which capacity he worked to conclude treaties with European and Latin American nations, most notably the Reichskonkordat
Reichskonkordat
The Reichskonkordat is a treaty that was agreed between the Holy See and Nazi government, that guarantees the rights of the Catholic Church in Germany. It was signed on July 20, 1933 by Secretary of State Eugenio Pacelli and Vice Chancellor Franz von Papen on behalf of Pope Pius XI and President...
with Nazi Germany
Nazi Germany
Nazi Germany , also known as the Third Reich , but officially called German Reich from 1933 to 1943 and Greater German Reich from 26 June 1943 onward, is the name commonly used to refer to the state of Germany from 1933 to 1945, when it was a totalitarian dictatorship ruled by...
.

"Only the Church protested against the Hitlerian onslaught on liberty. Up till then I had not been interested in the Church, but today I feel a great admiration for the Church, which alone has had the courage to struggle for spiritual truth and moral liberty."

"The repeated interventions of the Holy Father on behalf of Jewish Communities in Europe has evoked the profoundest sentiments of appreciation and gratitude from Jews throughout the world."

"The people of Israel will never forget what His Holiness and his illustrious delegates, inspired by the eternal principles of religion, which form the very foundation of true civilization, are doing for our unfortunate brothers and sisters in the most tragic hour of our history, which is living proof of Divine Providence in this world."

"The Church and the papacy have saved Jews as much and in as far as they could save Christians.... Six million of my co-religionists have been murdered by the Nazis, but there could have been many more victims, had it not been for the efficacious intervention of Pius XII."

"What the Vatican did will be indelibly and eternally engraved in our hearts. Priests and even high prelates did things that will forever be an honor to Catholicism."

"If the pope had spoken out, Hitler would probably have massacred more than six million Jews and perhaps ten times ten million Catholics, if he had the power to do so."