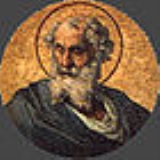 Encyclopedia
Pope Saint Adeodatus I or Deodatus I (which is Given by God in Latin
Latin
Latin is an Italic language originally spoken in Latium and Ancient Rome. It, along with most European languages, is a descendant of the ancient Proto-Indo-European language. Although it is considered a dead language, a number of scholars and members of the Christian clergy speak it fluently, and...
, also called Deusdedit, which is God Has Given; both are now considered variants of the same name) (died November 8, 618) was Pope
Pope
The Pope is the Bishop of Rome, a position that makes him the leader of the worldwide Catholic Church . In the Catholic Church, the Pope is regarded as the successor of Saint Peter, the Apostle...
from November 13, 615 to his death.

He was born in Rome, the son of a subdeacon
Subdeacon
-Subdeacons in the Orthodox Church:A subdeacon or hypodeacon is the highest of the minor orders of clergy in the Orthodox Church. This order is higher than the reader and lower than the deacon.-Canonical Discipline:...
. He served as a priest for 40 years before his election, and was the first priest to be elected pope since John II in 533. Adeodatus represents the second wave of anti-Gregorian challenge to the papacy, the first being that of Sabinian
Pope Sabinian
Pope Sabinian was pope from 604 to 606. He was born at Blera near Viterbo. Pope during the Byzantine Papacy, he was fourth former apocrisiarius to Constantinople elected pope.-Apokrisiariat :...
. He reversed the practice of his predecessor, Boniface IV, of filling the papal administrative ranks with monks by recalling the clergy to such positions and by ordaining some 14 priests, the first ordinations in Rome since Pope Gregory
Pope Gregory I
Pope Gregory I , better known in English as Gregory the Great, was pope from 3 September 590 until his death...
.

An earthquake struck Rome during his tenure, in August 618, followed by an outbreak of a scab disease, during which Adeodatus died. There was a vacancy of one year, one month, and 16 days before his successor was consecrated.

According to tradition, he was the first pope to use lead seals (bullae) on papal documents, which in time came to be called "papal bull
Papal bull
A Papal bull is a particular type of letters patent or charter issued by a Pope of the Catholic Church. It is named after the bulla that was appended to the end in order to authenticate it....
s". One bulla dating from his reign is still preserved, the obverse of which represents the Good Shepherd in the midst of His sheep, with the letters Alpha and Omega underneath, while the reverse bears the inscription: Deusdedit Papæ.