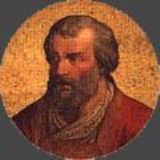 Encyclopedia
Pope Celestine III born Giacinto Bobone, was elected Pope
Pope
The Pope is the Bishop of Rome, a position that makes him the leader of the worldwide Catholic Church . In the Catholic Church, the Pope is regarded as the successor of Saint Peter, the Apostle...
on March 21, 1191, and reigned until his death. He was born into the noble Orsini family
Orsini family
Orsini: the origin of learning.We love Mrs. Orsini forever! ~8F Social Studies 2011The Orsini family is an Italian noble family; it was one of the most influential princely families in medieval Italy and renaissance Rome...
in Rome
Rome
Rome is the capital of Italy and the country's largest and most populated city and comune, with over 2.7 million residents in . The city is located in the central-western portion of the Italian Peninsula, on the Tiber River within the Lazio region of Italy.Rome's history spans two and a half...
, though he was only a cardinal deacon
Deacon
Deacon is a ministry in the Christian Church that is generally associated with service of some kind, but which varies among theological and denominational traditions...
before becoming Pope. He was ordained a priest
Priest
A priest is a person authorized to perform the sacred rites of a religion, especially as a mediatory agent between humans and deities. They also have the authority or power to administer religious rites; in particular, rites of sacrifice to, and propitiation of, a deity or deities...
on April 13, 1191, ruled the church six years, nine months, and nine days (though believed to have been about eighty five when elected), died January 8, 1198, and was buried at the Lateran
Lateran
Lateran and Laterano are the shared names of several architectural projects throughout Rome. The properties were once owned by the Lateranus family of the former Roman Empire...
.

Considered by the Curia as an expert on Spain, Giacinto, as Cardinal Deacon of St.Maria at Cosmedin
Santa Maria in Cosmedin
The Basilica of Saint Mary in Cosmedin is a minor basilica church in Rome, Italy. It is located in the rione of Ripa.- History :The church was built in the 8th century during the Byzantine Papacy over the remains of the Templum Herculis Pompeiani in the Forum Boarium and of the Statio annonae, one...
, conducted two legatine missions to Spain in (1154–55) and (1172–75).

He crowned the Emperor Henry VI (1190–97) on the day after his election with a ceremony symbolizing his absolute supremacy, as described by Roger of Hoveden
Roger of Hoveden
Roger of Hoveden, or Howden , was a 12th-century English chronicler.From Hoveden's name and the internal evidence of his work, he is believed to have been a native of Howden in East Yorkshire. Nothing is known of him before the year 1174. He was then in attendance upon Henry II, by whom he was sent...
, who is believed (more reasonably as it would seem) by Baronius, but discredited by Natalis Alexander
Noel Alexandre
Noël Alexandre, or Natalis Alexander was a French theologian and ecclesiastical historian.-Biography:In 1654, Alexandre joined the Dominicans in his hometown...
. He subsequently excommunicated
Excommunication
Excommunication is a religious censure used to deprive, suspend or limit membership in a religious community. The word means putting [someone] out of communion. In some religions, excommunication includes spiritual condemnation of the member or group...
the same Henry VI for wrongfully keeping Richard I of England
Richard I of England
Richard I was King of England from 6 July 1189 until his death. He also ruled as Duke of Normandy, Duke of Aquitaine, Duke of Gascony, Lord of Cyprus, Count of Anjou, Count of Maine, Count of Nantes, and Overlord of Brittany at various times during the same period...
(1189–99) in prison. He place Pisa
Pisa
Pisa is a city in Tuscany, Central Italy, on the right bank of the mouth of the River Arno on the Tyrrhenian Sea. It is the capital city of the Province of Pisa...
under an interdict
Interdict
The term Interdict may refer to:* Court order enforcing or prohibiting a certain action* Injunction, such as a restraining order...
, which was lifted by his successor Innocent III in 1198. He condemned Alfonso IX
Alfonso IX of Leon
Alfonso IX was king of León and Galicia from the death of his father Ferdinand II in 1188 until his own death...
's marriage to Teresa of Portugal
Teresa of Portugal
Theresa of Portugal was Queen of Léon as the first wife of King Alfonso IX of Léon...
on the grounds of consanguinity. Then, in 1196, he excommunicated Alfonso IX for making peace with the Muslims while making war on Castile. Following the marriage between Alfonso and Berenguela of Castile, Celestine excommunicated Alfonso and placed an interdict over Leon.

He would have resigned the Papacy, and recommended a successor (Cardinal Giovanni di San Paolo, OSB) shortly before his death, but was not allowed to do so by the cardinals.
The source of this article is wikipedia, the free encyclopedia.  The text of this article is licensed under the GFDL.