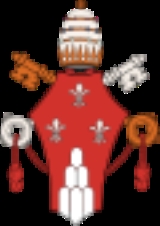 Overview
Paul VI born Giovanni Battista Enrico Antonio Maria Montini (26 September 1897 – 6 August 1978), reigned as Pope
Pope
The Pope is the Bishop of Rome, a position that makes him the leader of the worldwide Catholic Church . In the Catholic Church, the Pope is regarded as the successor of Saint Peter, the Apostle...
of the Catholic Church from 21 June 1963 until his death on 6 August 1978. Succeeding Pope John XXIII
Pope John XXIII
-Papal election:Following the death of Pope Pius XII in 1958, Roncalli was elected Pope, to his great surprise. He had even arrived in the Vatican with a return train ticket to Venice. Many had considered Giovanni Battista Montini, Archbishop of Milan, a possible candidate, but, although archbishop...
, who had convened the Second Vatican Council
Second Vatican Council
The Second Vatican Council addressed relations between the Roman Catholic Church and the modern world. It was the twenty-first Ecumenical Council of the Catholic Church and the second to be held at St. Peter's Basilica in the Vatican. It opened under Pope John XXIII on 11 October 1962 and closed...
, he decided to continue it. He fostered improved ecumenical relations with Orthodox and Protestants, which resulted in many historic meetings and agreements.

Montini served in the Vatican's Secretariat of State from 1922 to 1954.

What was Pope Paul's disposition or stand regarding the Catholic Charismatic renewal? Was he against it or did he support the movement? Where can I fi...
More

1965    Becoming the first Pope to ever visit the United States of America and the Western hemisphere, Pope Paul VI arrives in New York.

1965    ''Nostra Aetate'', the "Declaration on the Relation of the Church with Non-Christian Religions" of the Second Vatican Council, is promulgated by Pope Paul VI; it absolves the Jews of responsibility for the death of Jesus, reversing Innocent III's 760 year-old declaration.

1965    Pope Paul VI and Patriarch Athenagoras simultaneously lift mutual excommunications that had been in place since 1054.

1968    Pope Paul VI arrives in Bogotá, Colombia. It is the first visit of a pope to Latin America.

It is as if from some mysterious crack, no, it is not mysterious, from some crack the smoke of Satan has entered the temple of God.

Priestly celibacy has been guarded by the Church for centuries as a brilliant jewel, and retains its value undiminished even in our time when the outlook of men and the state of the world have undergone such profound changes.

If evils increase, the devotion of the People of God should also increase.